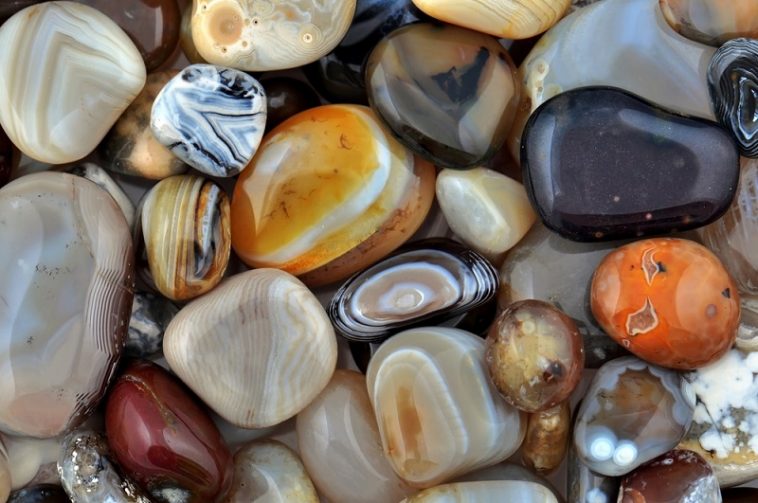 Agates come in a dazzling array of varieties, and they’re found in the collection of most rockhounds. They’re beautiful, readily found, and extremely tough. It makes them ideal for a variety of specimen types in addition to jewelry.

Ready to learn some more about these fantastic stones?

Read on, we’re going to dive into the subject. We’ll teach you what agates are, how to find them, and give you some ideas on what to do with them once they’ve been found!

Agates are primarily composed of chalcedony, which is a form of silica dioxide(SiO₂). It’s the same stuff that makes up glass, quartz crystals, and even opals.

The defining characteristics of minerals usually come from their crystalline structure. Chalcedony is cryptocrystalline. The term’s root reveals the structure: crypto means hidden. These microscopic crystals are hard to see even under a microscope.

Chalcedony exists on a continuum of cryptocrystalline SiO₂, which includes flint and chert. The defining characteristic is that chalcedony is transparent.

Traditionally, agate referred to banded varieties of chalcedony. These days it’s used for any stones with inclusions that are comprised primarily of transparent chalcedony.

These range from relatively mild banded stones to stunning Turkish agate. The variety of stones available for an agate collector is insane.

Agates are very hard, running a 7 on the Moh’s scale. This makes them perfect for carving or polishing, They have a long history of use in jewelry and as ornaments. Their hardness makes them a forgiving stone for beginners. They also take a long time to work.

If you take nothing else away from this, remember the following: agate are included varieties of transparent chalcedony.

What Types of Agate Are There?

For the agate collector, there’s a bewildering array of stones available. A comprehensive list is almost impossible, especially since some of the most stunning agates are only known by the name of their location.

In general, however, we can break down agate into a few categories:

The above isn’t a comprehensive listing. Similar to jaspers, agates are often called… well, whatever the finder wishes to call them. The above are some general guidelines.

Often agates will be called by their location, instead of simply by their description. Spectacular varieties like Lake Superior Agate or Hampton Butte Plume Agate are a couple of well-known examples.

While most agate nodules are in roughly the same “style” across the stone, two slabs from the same nodule can look quite different. Agates are three-dimensional since they’re transparent with heavy inclusions. Great agates are like a window into another world.

What About Dyed Agates?

Many a beginning rock collector has been fooled into buying dyed agates. Some unscrupulous sellers will present them as natural, especially if a person doesn’t know better.

Dyed agates are easy to recognize: they’ll be comprised of varying shades of the same color. Heavy color saturation, making a very deep hue, is the biggest tell. Some agates have striking colors, but they almost always vary in actual color across the stone.

There’s nothing stopping you from buying a nice display piece or specimen, of course. Just be aware that any single-colored, large piece of agate is most likely dyed. If it were real it would be a rarity, and you’d be paying a very steep premium.

Where Can I Find Agates?

Agates are surprisingly common across the world. If there was volcanic activity nearby… there are going to be agates to be found.

The most commonly sought-after agates are nodules. These are usually small, ranging from ½” to 3” across. Nodules can easily be found in riverbeds and streams. When wet they’ll stick out from more common stones, making it one of the easiest ways to find them.

While agates can be found in most places in the United States, not all of them are exceptional specimens.

Root Beer Agate is a good example of an underwhelming agate. Specimens can be found on the Central Coast of California, particularly on Jalama Beach where large nodules rest in the limestone. It’s plentiful, and it’s easy to find larger-than-average specimens.

The problem? Well, most collectors aren’t going to go crazy over it because it’s just comprised of different layers of brown. I certainly lost my enthusiasm for it after slicing two or three specimens and seeing that they were… well, boring on the inside.

They’re still agates, but most collectors are on the hunt for the good stuff.

Some of the best states for agate are the following:

Great agate varieties usually occur in tight areas, which may or may not be on public land. If you’re a rockhound then it’s your responsibility to know if you have permission to be collecting stones from the land.

Many spots are held in secret by the people who hunt them.

The truth is that there are good agates in an overwhelming variety of places. California may not top the list, for instance, but I’ve already noted collecting Root Beer Jasper off the beach.

On the other hand, Nipomo Agate occurs in the clay of a small town in the same area. It’s an orange variety of agate, which has thick plumes of marcasite that create a silver effect. It was even a trendy stone for a short time.

So, even if you’re not in one of the above-listed states you may not be out of luck. There are great agates everywhere, but you may need to hunt extensively for lesser-known varieties.

How Do I Find Agates in the Field?

Nodules are the best bet for the amateur rockhound. There are other forms of agate, notably vein agate, but they’re not going to be found without mining. For most collectors, nodules are where it’s at!

Actually finding agates in the field is going to take practice. An experienced rockhound may be able to recognize a nodule from some distance, particularly if they know the area. A lot of successful hunting relies on skills that can’t be taught.

That said, there’s a lot you can do to increase your chances of finding them.

The recommended spot for finding agate nodules is usually small streams or dry riverbeds. Streams make them easier to identify, a clean and wet agate shows its nature easily.

In streams, your best bet is to walk alongside them and look for areas where small stones are piled up. Agates are very dense, and they tend to “sit” in depressions and bends. Digging into these small piles can be fruitful.

Most nodules will be noticeably different in color from the more common stones in the area. The cryptocrystalline nature of agate also means a difference in texture. They’ll often feel “waxy” on the surface. They may be noticeably heavier than other stones in the area, but that’s not the case where there’s a lot of igneous stones.

In dry areas, you should bring along a rock pick. If the area was formerly a riverbed then look for spots where stones are piled up. Depressions are often the best. Since agate nodules are small you may have to dig through the stones a bit, often the smaller stones settle to the bottom.

I prefer to work an area of about 3’x3’ at a time, moving the rocks in one direction until I get to a layer where the stones are 2-4” or so. Agates often stick out, but if there’s a lot of dust a water bottle can reveal the nature of any suspected stone.

Some agates have matrix on them, often the host rock. These can be taken off later.

Related: How To Clean Agates

Nodules are usually round or egg-shaped. The surfaces will often be pockmarked, where bits of the matrix have been worn off. In most areas, they’ll have a significantly different shape than most of the common stones around them. Pay attention to the differences and you’ll be able to find more of them.

You may also find chips from larger nodules of agate. These may still be a big conchoidal flake, or the edges may be ground down. It just depends on how long ago the stone broke.

At times you may find something that you’re not sure of. The nodule may still be covered entirely in the host rock, for instance. That’s why learning to recognize the shape is so important.

If you don’t fancy hauling a bunch of “maybe” stones back, then you can take advantage of one of the agate’s properties. It displays conchoidal fractures, which also means you can often crack a nodule with a direct hit.

A hammerstone can be used in place of a rock pick if you’d like, but either way a good strike to the stone will reveal the inside. Agates will always be smooth on the interior when freshly broken, with a waxy or glass-like texture.

If you plan on cutting specimens, try to avoid field cracking them if possible. Even if you’re mistaken it’s no big loss. Frankly, agate is going to be harder on blades than anything else you’ll find.

With some patience and experience, you’ll be surprised at how many you can find! 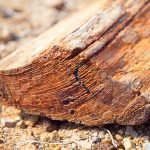 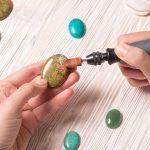