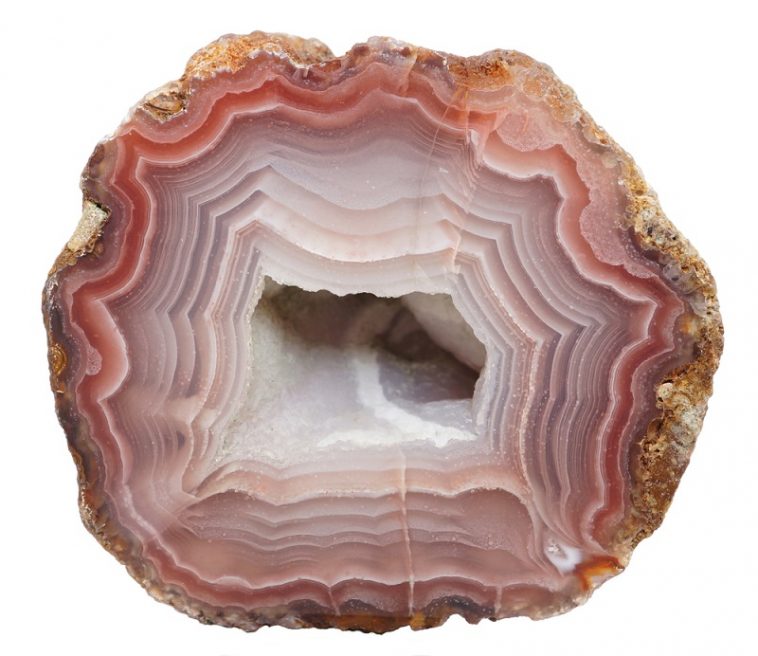 Agates and geodes are both hot ticket items for rock collectors big and small, but the exact definition can seem elusive. It’s important to be able to distinguish between different kinds of stones as a rockhound, terminology is one of the most important things to learn as your knowledge grows.

So, grab your mining helmet and let’s dig in as I explain the differences of agate versus geode so you can walk away with some new knowledge!

What is an Agate?

Agates are a transparent, cryptocrystalline silica mineral with inclusions. Strictly speaking, agates are supposed to be banded but the term has grown to include a wide variety of different included chalcedony stones.

The classic banded agate is easy to find, as are many varieties. Agates usually occur in small nodules that collectors either polish or cut open, larger agates are often cut into slabs that show a cross-section of the entire interior.

Agates have an incredible range of colors and shapes contained within them. Coloration emerges from impurities in the chalcedony base, while forms like plumes and moss are actually other minerals trapped inside the silica during formation.

The diverse range of the material, combined with its smoothness when polished, also makes it a valuable tool for specialized purposes. If you look hard enough you can also find agate used in guitar and bass picks, producing their own unique tone when the string is plucked.

Agates formation is primarily in nodules, but there are also agates that occur in larger veins and sometimes in the seams of differing rock layers.

Agate is made of the same stuff as quartz, silica or SiO₂, but they lack the same ordered internal structure. In other words, it doesn’t form as crystals on the scale they can be seen. Natural silica which doesn’t form crystals at all becomes obsidian in most cases, but in all cases, they’re technically a glass instead of a stone.

Like other cryptocrystalline quartz varieties, agates display a conchoidal fracture. While not as sharp as obsidian, you can get a pretty good edge with careful pressure flaking along the edges of a thin piece of agate. While some ancient artifacts are made of agate, the majority are created by modern knappers. Without a slab saw, agate is very hard to work.

One of the biggest differences between agates and similar decorative stones is the fact that it’s ridiculously hard. Running at a 7-7.5 on the Moh’s scale, agate is harder than the vast majority of materials we run into on a daily basis. That makes working it by hand exhausting, and even with the proper tools, agate is notoriously tough.

The takeaway here is this: agates are a form of included chalcedony, often with a banded pattern but including clear chalcedony that simply has inclusions of other minerals.

What is a Geode?

Geodes are among the first stones that draw most collectors in, but it’s more of a description than its own type of stone. Their defining feature is a sphere-to-potato shape and the fact that they’re hollow with crystals growing on the interior.

The majority of geodes that can be found are filled with either quartz or calcite, often with various other minerals also growing on the interior. Their causes vary a bit but the factor that ties them together is that they started as air pockets in stone before other minerals began to fill them in.

Geodes can be small or large, ranging in form from balls the size of a quarter to the massive cathedrals of amethyst found in Brazil. They come in quite a few varieties, but the defining feature is simply the fact that they’re hollow stones with minerals on the inside.

In many quartz formations, especially thicker ones, you may see other forms of silica on the exterior banding. This is usually some form of agate, often in a thin layer visible only when the stone has been cut. The larger crystals grow out of this solution.

There are also “geodes” that have a solid interior, called thundereggs.

Thundereggs are just round agate nodules. While the form is similar to a geode, its also the only thing that distinguishes them from any other form of agate that’s found n the field. They tend to be about fist-sized but there’s a wide range of sizes out there.

Strictly speaking, thundereggs aren’t geodes since they’re not hollow on the interior, but the two are usually put together in the same basket.

The thing to remember is simply that geodes are hollow internal nodules in stone that have crystallized mineral growth on the interior. Thundereggs are their own category, but their round form often leads to them being characterized as just a complete geode, rather than being recognized as simply a nodule of agate.

How Are Agates and Geodes Similar?

Both are common specimens found in many places across the planet.

From there, similarity gets hard to talk about since geodes are a description of form rather than the mineral itself. That’s before we come to the fact that thundereggs, often thrown in the geode “family”, are agate.

As far as similarity with quartz geodes specifically, quartz and chalcedony often form together and some of these geodes have banded chalcedony on the exterior. This could be called agate due to its similarity in form but unless the formation is particularly large the geodes are usually just sold as geodes instead.

Ignoring form, the biggest difference between geodes and agate is their crystal size.

Geodes, of any type, form macro crystals within the void they’re formed in. That means they’re large enough to be seen by the human eye unaided, often presenting as forms like quartz or amethyst points on the interior of the stone.

On the other hand, agate is specifically cryptocrystalline. That means there is no visible ordered structure to the raw stone, but it maintains a crystalline form if you use a microscope. While both varieties of silica can have inclusions, such as rutilated quartz, agate virtually always has inclusions and impurities which create the colors in the stone.

Agates often form in irregular nodules. One with a spherical shape is a thunderegg, but it’s still a nodule.

You can identify them in the field since they’ll have a distinctly different form than the stones around them. They’ll usually be much heavier than the matrix stone they’re held in as well, since they commonly form in limestone and other soft sedimentary rock.

Geodes, on the other hand, are much lighter than the stones around them in most cases. They’ll have a large pocket of air in the center along with the crystals, and one of the easiest ways to dig them out is simply to look for round or potato-shaped stones that are lighter than they look.

In a lot of ways, agates have inclusions, while geodes are inclusions in the host rock. It’s an important distinction to make.

How Do I Tell Agates and Geodes Apart?

If you’re new to rockhounding and aren’t sure what the rock you have in front of you is, you can take a quick look at this checklist to determine if you’ve got a geode or agate on your hands:

So, there you have it! The differences are vast and easy to determine, but there’s no such thing as a dumb question.

This one is largely about learning terminology, so take what you’ve learned into the real world and get digging! 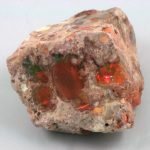 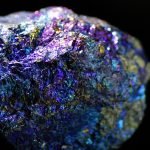