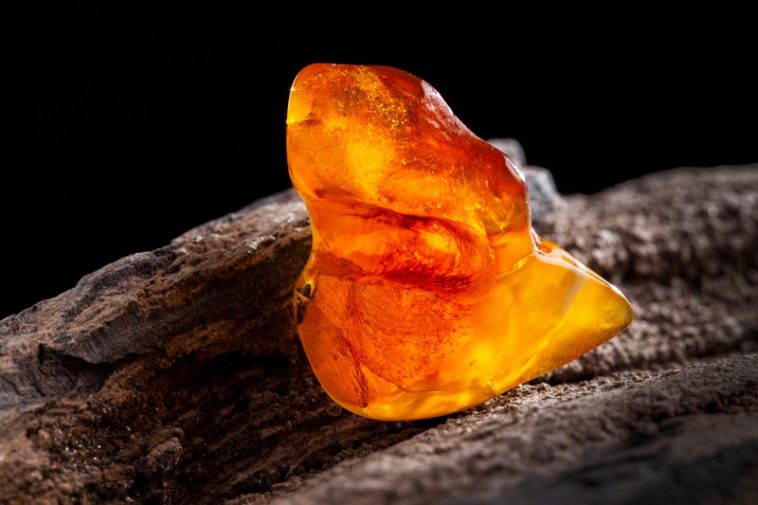 Amber is an amazing example of the sheer variety of gems produced by the Earth. In this case, amber is fossilized tree sap that often brings with it glimpses into a world far away from ours. Each specimen is a bit of history and collectors have a lot to learn.

Let’s dive into the what, how, and where of amber. It might just be the start of an amazing new journey.

Amber is a petrified form of tree resin. Essentially, immense heat and pressure drive the aromatic components and moisture out of the resin, which eventually forms a macromoleuclar structure.

Amber is a strange material. If you’ve never handled it before you’re in for a surprise, especially if you’ve been rockhounding. Real amber actually feels like plastic, and in many ways, it is natural plastic.

Amber is usually a warm orange color, but a blue variety also exists. Some ambers are also much deeper in color.

For most people, the attraction isn’t to the mineral itself but instead the various inclusions. Amber is famous for containing bits of plants and insects that give us a real glimpse into the primordial world. The most common are plant bits, but insects can be found readily. For those willing to spend a few thousand dollars, some specimens even have trapped vertebrates like lizards.

Amber has also been ground up and used for various applications, including perfume. Its industrial significance has lessened over the years, and most pieces are now used for the consumer market as jewelry or specimen pieces.

What Types of Amber Are There?

Amber is broadly classified by its exact chemical composition. The exact details are a bit beyond the scope of this article, but for those interested there are research papers detailing the differences.

For a collector, the exact composition doesn’t matter much. Different deposits are formed of different types, but it’s the visual appeal and inclusions we’re looking for.

Most amber is called by where it comes from. The following are some of the more common types.

There are deposits around the world, but the bulk of amber found on the market comes from the Dominican Republic and the Baltic deposits.

Most specimens should be evaluated on their own merits. Amber comes in a wide variety of clarity levels and colors, in addition to the possibility of exciting inclusions.

How Do I Know if Amber is Fake?

Amber is a valuable material, so naturally, there are going to be counterfeit specimens on the market.

A lot of them are easily identifiable. If you see something with a large scorpion, lizard, or tarantula in it that doesn’t cost as much as a car… well, it’s probably just a resin piece. They’re relatively common, especially online.

The best thing you can do to be wary of fake amber is to identify the inclusions. It doesn’t cost much more to manufacture a fake with insects in it, but the price difference is immense. Fake amber also lacks any inclusions other than the insects, real amber often has bits of plant matter or air bubbles contained within it in addition to the bug.

The big exception to this is copal. Copal is comparatively common and is often sold as “young amber.” That’s precisely what it is, copal is only a few thousand years old, as opposed to the millions of years for amber.

It’s also less expensive for the most part.

Copal is soluble in alcohol, so wipe a bit of the piece with denatured alcohol or high percentage isopropyl. It will cloud the surface or cause it to become sticky, making it easy to distinguish.

The chemical difference from amber is simple. Copal isn’t polymerized, so it doesn’t quite make the cut for amber although it has the potential to become amber with a few million years.

There are a few common tests used to help:

Buying amber online is a little bit sketchy at times, but most fakes are very obvious to someone who knows what to look for.

Use reputable merchants when buying samples. It’s impossible to recommend a platform as a whole, but instead, you’ll have to evaluate them for yourself. Places like Gem Rock Auctions often protect their buyers from fake stones but the usual suspects like Etsy and eBay often have good specimens as well.

Above all else, if in doubt then don’t buy the piece.

Where Can I Find Amber?

While the majority of the world’s amber comes from just a couple of deposits it occurs globally. It seems that a lot of the earth had trees that generate the kind of resin that formed into amber over millions of years.

If you’re hunting in the United States you’re not out of luck.

The following states all have deposits of amber:

Arkansas has the largest deposits, but New Jersey is noted for a complex ecosystem of inclusions.

Unfortunately, there aren’t any open paid digs for the public when it comes to amber. You’ll have to find an area to work and make sure that you’re able to get permission to dig. When looking for a spot you’ll be trying to identify places that are rich in lignite, also called brown coal. It commonly co-occurs with amber.

The majority of amber within the USA is found in clay beds. If you’re lucky enough to find a spot then you’ve got some work ahead of you. On the other hand, if you’re in certain places you can often find samples through normal beachcombing.

Having found a suitable location, you’ll need to get some basic digging equipment together. In this case you may not need a rock pick, but you definitely need a good shovel and a small rake.

Amber in these locations are held in thick clay in many cases, so you’ll be digging down then spreading the clay out to see what you can find. Often you can find a few pieces on the surface, look for collected areas of small round balls of clay.

Careful raking can reveal small, rounded nodules of yellow to brown material. Getting them wet usually reveals their character, and a heated needle or knife tip can help you identify them.

Since amber co-occurs with lignite, you’ll want to dig down to that layer for significant specimens.

Lignite is usually a few feet down, but it can be deeper than 5 feet in some areas. It looks like small chunks of charcoal or burnt wood deposited through the clay matrix. It’s down here that most of the larger pieces show up.

You’ll quickly acclimate to figuring out which bits are amber. Most are quite small, so rake thoroughly.

Honestly, there’s no real trick to it.

If you’re digging in the right area you’ll find amber.

If you dig enough, you’ll find some good sized pieces of amber.

Digging for amber is relatively straightforward and it’s easy to identify in the field. The question is mostly just a matter of finding the right clay fields  and getting permission to go digging if they’re not on public land.

Clay digging can be a bit rough, but there are some impressive specimens found that way. Or rather, impressive for American amber.

You’re not going to find any amber beachcombing in the US, but it’s not a bad idea to consider trying the beach if you’re on vacation. Finding the stuff on the beach was the only way amber was found in Europe for most of human history.

The places amber can be found are numerous overseas. If you’re in South America for a vacation, then you’ll be pleased to know that Dominican Amber regularly washes up on the beach of the Dominican Republic, making it a prime spot for collecting.

If you’re a regular beachcomber it’s a breeze.

Most of us have some way to organize the smorgasbord of visual information on a beach and once you’re locked in on amber you’ll find pieces all over the place.

Sea amber tends to be easier to find than amber held in clay. It will float up with the tides and be deposited on the beach, usually among stones. Just go digging and see what you can find, it’s best to get out just after the tide has receded to see what was deposited.

You may not be able to find amber on US beaches, but it’s something to consider the next time you decide to go on vacation! 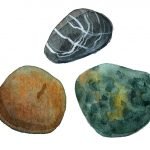