The variety of stones sometimes seems neverending, but learning how to tell them apart is a foundational skill for mineral collectors. Confusion can come from appearance, similar names, or even basic information that’s been passed down wrong.

Do you know the difference between aventurine and amazonite? Ready to learn? Let’s grab a pick and get to the heart of the matter in this comparison guide!

Aventurine is a variety of quartz that displays a shimmering effect, aptly named “aventurescence.” Aventurine is usually green in color, but red and orange variations are sometimes found.

Aventurine is a rock, meaning that it’s a conglomerate of separate minerals fused into one mass rather than being a single crystal. Most of us think of the latter when we hear the term “quartz” but green quartz crystals (called prasiolite) are another matter entirely.

Aventurine is commonly found with rock and crystal sellers in a bunch of forms. The unworked form isn’t as attractive as most quartz, mostly looking like a shimmery, green-ish rock, but high-quality specimens are often cut into cabochons or beads for use in jewelry.

Aventurine is often banded with deeper or lighter colors, and it can vary from translucent to opaque depending on the varieties of inclusions in the material. Colors range from light to very deep green depending on the locality and individual specimen.

Aventurine’s sparkle is what makes it attractive when cut, but the majority of samples are just tumbled and passed on in bulk. There’s enough stone out there that’s no sense cutting garden-variety aventurine when the good stuff is only marginally more expensive as rough.

Overall, it’s one of the more common collectible stones out there. It’s easy to work, very durable, and common in larger chunks. You can find it in most rock shops, where the majority of material is Indian in origin.

Amazonite refers to a species of microcline feldspar that occurs with a blue-green to light green color. The closest resemblance is to turquoise at a glance, but you’re unlikely to confuse the two unless you’re just looking at pictures.

Amazonite is actually named after the Amazon river in South America, called after stones found in the pounding waters. Oddly enough, no one is quite sure if the green stones that give amazonite its name were amazonite, but the name has stuck.

In an even odder turn of events, usage of amazonite as a decorative element dates back to Ancient Egypt… but it seems no one bothered to record anything about it! It wasn’t even recognized as its own species of mineral until the 18th century.

Amazonite’s coloration is different than the majority of blue stones: coloration is dependent on lead and water content in the stone. The lead is tightly bound, you don’t need to take any extra precautions working with it over the normal measures to avoid silica exposure (ie: respirator, work stone wet).

Strictly speaking, amazonite is high-quality microcline but in practice, the term has come to be used for all of it. Microcline often contains numerous internal fractures, so high-grade material is needed for lapidary use.

This pale turquoise material is very popular in both cut and native forms. The large crystals formed by microcline are unique and attractive, while the cut material makes a suitable turquoise replacement in traditional silver jewelry without commanding the high prices that the current turquoise market demands.

These two materials are similar mainly in their use. Both are sometimes used as replacements for more expensive stones in jewelry and they share a similar level of availability. In general aventurine will be less expensive, but the prices can have some overlap depending on vendor and grade.

Both materials also share a similar hardness, coming in at about 6-6.5 on the Moh’s scale. There’s also some overlap on the lower end of the scale when it comes to coloration, but you can usually tell them apart simply from photographs.

Still, ready availability and similar hardness do lead to some people finding separating them confusing. Especially since two of the biggest measures are very close to each other: even the specific gravity of aventurine and amazonite are very close.

Fortunately for those looking to identify a specimen, there’re a lot of ways to tell them apart!

The oddest thing about the comparison between aventurine and amazonite is that the two are quite similar in many respects but easily discerned at a glance. This is one of the few comparisons where I’d be 100% confident determining the samples just from photos, but trying to do more advanced testing can leave a beginner shaking their head at similar results.

How Do I Tell Aventurine and Amazonite Apart?

The easiest way to differentiate these stones is by their crystalline form. Indeed, the similarities of the two in hardness and density make the two go-to “home” methods of testing problematic.

Aventurine is a rock, so most samples will be irregularly shaped. Amazonite forms as an irregularly shaped crystal, and massive ones at that! However, by the time most specimens have made it to a home, they’re most likely a fractured piece of a larger crystal.

That said, amazonite samples often have natural flat edges from the exterior of the crystal and they’ll lack the granularity of aventurine samples.

Coloration is a big one: aventurine is very rarely a shade that actually approaches blue, while high-quality amazonite pieces are often a startling blue-green. Amazonite won’t have banding in its coloration either, though some samples may have spots of orange-ish, whitish, or just less blue material.

Lastly, you can tell two similarly colored and polished specimens apart by opacity: amazonite is invariably opaque while aventurine will let light through in the majority of cases.

In short: if the stone has a smooth natural surface and seems homogenous it’s most likely amazonite, if it’s coarse then you have aventurine. Color is the best indicator at a glance if you’re working with samples that have been polished or tumbled instead of bearing a natural surface. 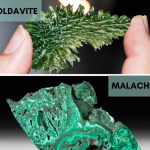 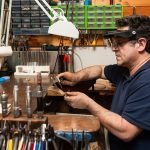