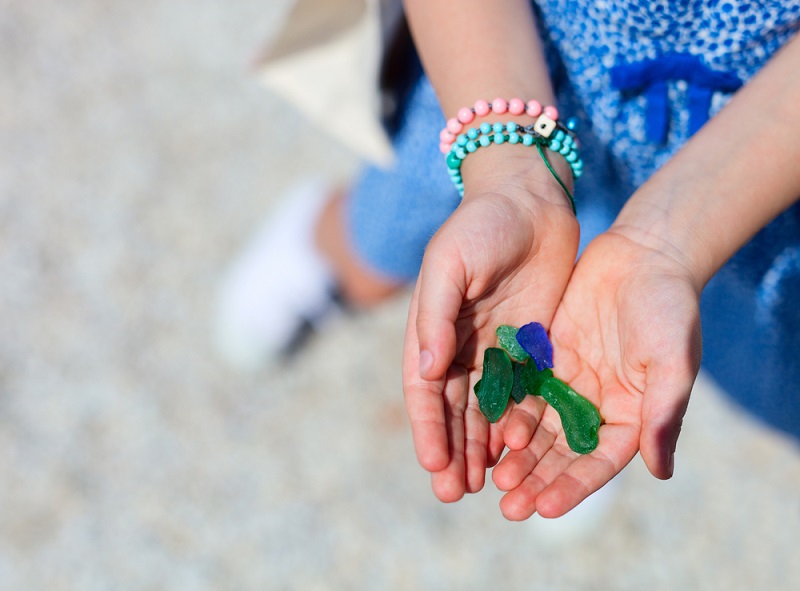 Sea glass has become a highly sought after commodity around the world. In the United States, there are both prolific and more challenging sites along both the eastern and western coastline, as well as a few sites along the Gulf Coast.

Sea glass hunters along the east coast have many choices. I will try to cover the most well-known, along with a few lesser-known, sites along the coast. But please note that there are many sites I will not be covering. By doing a bit of research for your particular area, east-coast dwellers may find some hidden local treasures.

I am mentioning the most well-publicized sites here, which means they can also become the most picked-over. By planning your trip in the early part of the year and watching weather and tides, you can greatly increase your chances of success.

If you’re new to the sea glass collecting community, it’s a good idea to read up about what to look for in genuine sea glass before you begin. Then you can begin to truly appreciate the unique pieces you may find or have already found along your local beaches.

Sand Dipper Beach Scoop Check Current Price
We earn a commission if you click this link and make a purchase at no additional cost to you.

We’ll begin our list of top ten along the New England seaboard, which has the greatest number of prolific sea glass sites on the east coast. The progress of the tides along with the older history and denser populations of this area makes for some rare and historically significant finds.

Jasper Beach, located along the northern shores of Howard Bay in Machias Bay near the mouth of the Bay of Fundy, has sometimes been called the beach with a billion billion stones. The beach is often sought out for the stones themselves. Rockhounds can spend days sifting through endless examples of the red jasper-like stone rhyolite and spotted, nearly-round balls of white quartz.

Scattered along with the billions of pebbles is a plethora of sea glass, especially in the spring or at low tide. The area has historically been touted as one of the most bountiful for sea glass. But these days there are many collectors so the finds are not as abundant as they once were. Some successful hobbyists have advised walking to the end of the beach, where several shallow caves continue to hide nuggets for dedicated seekers.

Located at the upper end of the Quoddy Narrows in northern Maine, Mowry Beach receives many treasures with the tides. The waves bring in debris that becomes trapped for local collectors and historians.

The area is sited for its sea glass in numerous online articles, and chat and blog sites display sea glass pieces found along the water’s edge. The area is a 48-acre state conservation project with enjoyable activities for the whole family while collectors are hard at work on the beach.

Much of the sea glass found on Great Diamond Island has been formed from the remnants of a huge military dumping ground off historic Fort McKinley. The fort itself dates from the Spanish-American War era through WW2. Pleasant Grove, or Sea Glass Beach, has one of the most abundant deposits in the area.

The beach is a 30-minute ferry ride from Portland, and while some shorelines are open to visitors, other areas are private property. Staying at the local inn will gain you greater access. Sea glass is located in several areas on the cove side of the island. It’s a quiet, picturesque place to visit, but you’ll want to find out where you can and cannot go.

Spectacle Island was the sight of a landfill through the 1940s and became open to the public in 2006 after some restoration efforts. It has now become world-famous for its wide assortment of sea glass specimens.

Local history can be traced through the sometimes large shards of glass and pottery recovered after 50-100 years of tumbling in the active surf. You’ll need to take a ferry from Boston to the island. Exploring and taking photos of your finds makes a wonderful day trip. However, removing sea glass from the island is not permitted.

The northward pointing “hook” of the Cape Cod peninsula creates a catch basin of the Western Main Coastal Current. Skaket Beach, located on the bayside of the cape, traps sea glass artifacts being propelled by this powerful current as it pushes past Maine, New Hampshire, the North Shore, and Boston. The beach is lovely, but parking is limited so early morning treasure hunting is recommended.

Skaket Beach is best known for its green, white, and some blue sea glass. Since this beach is more sandy than rocky, a cat litter scoop may be a helpful tool to turn the surface for better finds.

There’s a lot of history surrounding Race Point Beach, so it’s not surprising that the area has become known for enviable sea glass specimens. This area is fed by the same currents as Skaket Beach, which wash up lots of blue and green pieces along with brown and white.

Race Point is also extremely sandy, so extra time and tools will help bring buried sea glass treasure to light. Access can be challenging because of the beach’s popularity, so consider the best times for your hunting expedition. And while you’re at it, make sure you take time to just enjoy the spectacular view.

Nantasket Beach is located along the eastern side of a narrow strip of land protruding from the South Shore across from Boston. It is positioned to ideally capture tidal debris washed into Boston Harbor. The beach is being continually replenished with sea glass and pottery, to the delight of local and out-of-state collectors.

The area is known for a wide variety of sea glass specimens. As with most areas, the best time for a hunting expedition is at low tide or just after rough waters from winds or a storm.

Under current COVID-19 conditions, paid parking areas are restricted to 50% capacity, and public restroom facilities are closed. Limited accessibility can actually be helpful to treasure hunters, but you’ll need to plan an early arrival and perhaps a more limited time frame. Be sure to visit the website before heading there to get the most up-to-date information.

Far out on eastern Long Island’s South Fork are a number of beaches flanking a string of small seaside communities. These long stretches of oceanfront produce a treasure trove of sea glass colors from the most common browns and greens to the rarest purples, oranges, and reds.

Most beaches in this area have at least some parking fees. Some of the best-known sea glass collection areas are:

The Outer Banks is a long strip of islands just offshore in North Carolina. There are several places where sea glass is commonly found, including Bodie Island, Pea Island, Corolla, and Ocracoke. Really, anywhere along this island seaboard becomes a target for sea glass, especially after a storm.

Early mornings, during low tides, and early in the year are some of the best times to hunt here. The most common colors found along these beaches are brown, white, or green. However, there have also been beautiful blues, from cobalt to brilliant turquoise, along with occasional pale pink or lavender and bright red finds. Even an occasional well-patinaed, whole soda bottle is known to have been found here.

While sea glass is not as abundant along Florida coasts, there are still a few areas where it is found regularly, including along the Gulf Coast, where many shipwrecks along with a few dumping sites provide adventure for collectors and hobbyists.

The beautiful white beaches along the Gulf Coast are always a treat to visit, and finding sea glass along the way just adds to the adventure. The high winds and strong waves along Navarre Beach make it an ideal place for sea glass to wash ashore.

Navarre is a still relatively quiet gem along what is becoming an over-developed shoreline of abutting resorts. Common colors are often found. This is a sandy beach, so hunting sea glass can be a bit more challenging, but there continue to be regular finds here for those interested in spending the time to unearth it. 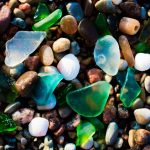 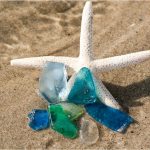