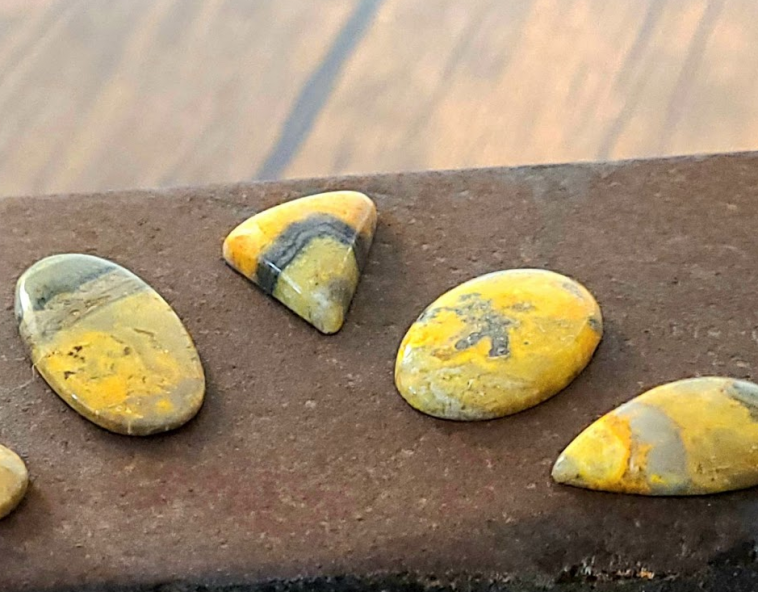 In the 1990s a new variety of “jasper” was discovered in Indonesia. The material’s orange and yellow dominant hues have led to it being called Bumblebee Jasper, but further discoveries have left a lot to be concerned about for fans of the stuff. Information can be hard to find and unreliable.

That’s where we come in. Let’s take a walk down the road of discovery, and we can discuss the ins and outs of this beautiful, sometimes mysterious, material.

Is Bumblebee Jasper Actually a Jasper?

No. Bumblebee jasper is not actually a type of jasper.

Jasper is a loose term for opaque cryptocrystalline quartz, usually only used when it has attractive coloration. When it’s dull we just call it chert.

Bumblebee Jasper isn’t a silicate mineral, which means its name is a bit of a misnomer from the start. The material’s superficial resemblance to other jaspers is just that, superficial.

Instead, the material we call Bumblebee Jasper is a complex conglomerate of minerals. Foremost among them is calcite, in which the coloring agents grow and create the complex patterns that the stone is known for.

The calcite formation in Bumblebee Jasper is a little bit different from the type you find in geodes. The crystals are formed as radial fibers from a central point, rather than the larger crystals that calcite is known for.

These coloring agents include realgar, and pyrite or hematite. The realgar content seems to be primarily found in orange and yellow sections of the stone.

Pyrite or hematite contains the oxidized iron that makes up the black parts of the stone. The end result is bands, orbs, and other complex structures that create striking patterns across the surface of the mineral.

Those of you who know minerals also know that realgar is a mineral that is high in arsenic, which is the cause of endless confusion about the material’s properties.

So, Is Bumblebee Jasper Dangerous?

One of the recent debates raging about this material is just how toxic it is.

I’ve heard everything from, “not at all” to “don’t touch without gloves and a mask” depending on who’s been asked. The latter is a perfectly reasonable step to take in response to the arsenic content, but the truth is a little more complex than that.

Realgar is toxic. Very toxic, as the As4S4 out front should have told you. It doesn’t need chemical processing in order to be used as a pesticide, which is primarily what the compound found use as before modern chemical engineering.

Arsenic is a cumulative poison. It builds up in the system over time and begins creating symptoms once it’s reached a certain threshold. It’s long been used as a poison for assassinations due to the fact it can slowly be introduced and do cumulative damage, rather than simply killing the person outright.

Be advised that I’ve been unable to find an actual case of poisoning by Bumblebee Jasper. Instead, what we’re left with are ways to reduce risk based upon the form the mineral is in.

People freak out about heavy metals, and understandably so. The symptoms of low-level exposure are the same as most other reactive metals, you’ll get a similar effect from screwing up your PPE use while cutting something copper-laden like malachite for instance, but it has trouble clearing the body and it can build up to fatal levels.

Your risk tolerance is up to you. I make no special precautions when handling it during jewelry work, but I do make an effort to have minimal skin contact in the finished piece.

Wire wrapping will have that effect, and I prefer to leave a full backplate underneath it when I set it with traditional silversmithing methods.

Frankly, I’m more worried about the copper and silver dust on my hands after setting any stone than handling a bit of Bumblebee Jasper for a few minutes.

The one truly dangerous thing I’ve seen recommended comes from crystal healing circles. Twice I’ve seen it recommended to make a “gemstone tincture” with the material for whatever metaphysical purposes. That means soaking the stone in water for an extended period… then drinking it.

That’s a terrible idea. Don’t do that with Bumblebee Jasper. For that matter, please don’t do it with any stone. Even those that don’t have water soluble components.

Bumblebee Jasper probably isn’t a good candidate for a very young child’s rock collection either, just because kids tend to stick things in their mouth.

Overall, I’d put Bumblebee Jasper at around the same risk level as malachite. It just means being extra cautious when doing lapidary work with the stone and perhaps putting a bit of effort into minimizing contact with pieces worn.

If you’re very concerned about skin exposure, a simple surface sealant will keep the arsenic and sulfur contained. Just keep it out of your mouth.

My personal take is that there’s a lot of fear-mongering about heavy metals, and basic precautions will protect you in 99% of cases where the contaminated mineral is used as lapidary material.

While the risk is real due to the presence of arsenic, keep in mind I couldn’t find a single medical case where Bumblebee Jasper was implicated in arsenic or sulfur poisoning. That said, much of the material is cut in areas where there may not be great data collection, so lapidaries should take standard precautions when cutting it.

Is There Fake Bumblebee Jasper Out There?

I’ve seen one example of a “fake” that was sold in the year 2002 to a friend. We later determined it was an “artfully” dyed bit of chalcedony due to the transparency.

Some of these fakes may still be in circulation. It’s normal when dealing with a newly discovered stone to have fakes flood the market for a few years until supply catches up with demand a bit.

Bumblebee Jasper is rare, but not high in cost. It’s still cheaper than malachite for a similarly sized piece, for instance. There’s not a whole lot of financial incentive to fake it at this point. The dye and material can be put to better commercial use, legitimate or illicit.

That said, I wouldn’t be surprised to find some other fakes on the market. Keep in mind that the stone comes from one locale, in West Java, so the location of your source is important. I haven’t seen any fake material in person since that one piece, and I couldn’t find an obvious example to share here.

It’s of little concern, just make sure you do a good bit of research before buying any stone online. 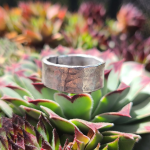 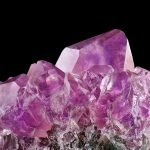