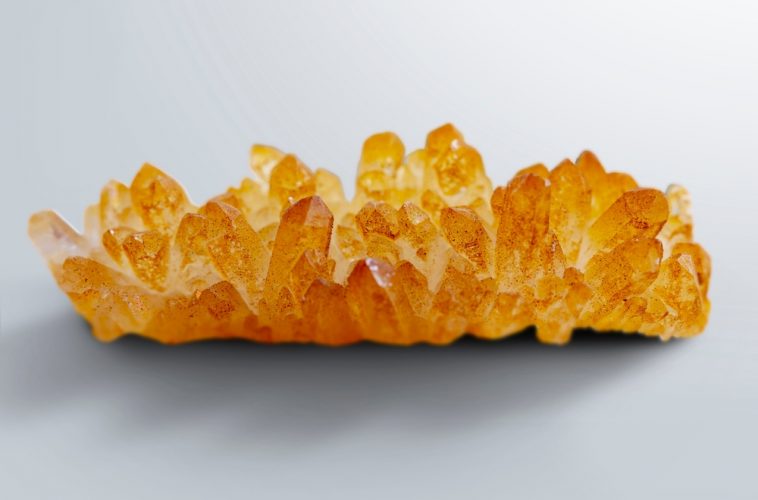 Citrine is among the most desirable of gemstones. A semiprecious stone with color that ranges from pale yellow to deep orange, it’s a favorite for many collectors of both specimens and jewelry. For the curious, however, there’s a lot to learn about this gemstone.

So, get your hard hat on and let’s dig into the heart of the matter with our guide to citrine.

Citrine is a variety of quartz that’s colored yellow to orange. It’s almost identical in physical makeup to amethyst, but differences in the original formation of the crystal cause it to take on a different color.

Quartz is silica, SiO₂, with a macroscopic crystal form. Silica makes up a large amount of the earth’s crust, and quartz is one of the most iconic crystals around. It’s known for its hexagonal shape and sharp terminations at the end of the crystal.

Indeed, the shape of a quartz point is often the basis for other crystals in art.

Citrine is a form of quartz that has iron in the color centers of the crystals. Depending on the formation temperature of the stone, you end up with one of three different forms of quartz. They are amethyst, prasiolite, and citrine respectively.

Please note that there are a few trains of thought on how citrine acquires its color. The above is the most common explanation found, and the one I tend to agree with. There may even be multiple causes of the coloration.

Citrine is a gem name, not a scientific classification. As long as the gem is colored yellow or orange through, and not just on the surface by something like ferrous oxide, it can be called citrine.

Of these, prasiolite is the rarest since it forms only in a narrow band of temperature between amethyst and citrine. These crystals form at the following temperatures:

Citrine is relatively rare since it requires higher temperatures to form. The charge of the Fe ion changes with temperature, altering the color of the stone.

It can seem to be a dramatic effect, but you can see similar changes with iron ions in other stones. One of the best examples would be pyrite and marcasite, two minerals with identical chemical composition but different iron ions caught in their matrix. One is the brassy stone known as Fool’s Gold, while the other is a silver, cubic crystal system that’s quite brittle.

We’ll get into further detail below, but the vast majority of citrine on the market is amethyst that has been heated after being pulled from the ground.

Citrine is used in jewelry extensively, especially since it’s one of the few affordable yellow or orange gemstones. Both colors can be quite limiting if you’re not ready to spring for colored sapphires.

What Kinds of Citrine Are There?

While citrine is all quartz, there are a few different varieties and common specimen types that are available.

There are three main types that you’ll see cut as faceted gemstones:

You may also run into a variety of crystals known as “lemon quartz.” Lemon quartz isn’t related to citrine, instead, it’s an irradiated form of smoky or clear quartz that ends up with a clean, even shade of yellow.

You may also run into ametrine. Ametrine is a citrine/amethyst stone with color zones from both ends of the spectrum. Often they’re cut so that there’s a clear dividing line in the center of the stone.

Natural citrine is often a grey-yellow color instead of the normal gold that’s associated with the stone.

It should be noted that citrine is very rare in nature, unlike amethyst. With its desirable coloration, we’ve got a problem on our hands for collectors.

And that problem is heat-treated amethyst.

Before we get any further assume that all citrine is heat-treated or irradiated material unless you have a report by a gemologist saying otherwise.

The vast majority of affordable citrine seen on the market started its life as amethyst. Usually as low-grade amethyst with pale coloration. When heated to the proper temperature, this causes a color shift towards yellow.

This is a common practice. While it’s ethical to divulge it if you know, it’s often impossible for a jeweler to be certain that any given piece of citrine didn’t get pulled from the earth as an amethyst. Gem dealers are under no obligation to disclose this treatment due to it being standard procedure.

Can you tell at home?

Kind of. There’s one known property of some citrine that won’t survive heat treatment.

Some samples of citrine are dichroic. You may be able to simply turn the crystal in your hand and see that it slightly changes colors as you go around. Better would be to use the proper tool to check it out.

If a sample displays dichroism, then it’s a real citrine from one of the localities dichroic citrine is found.

You’ve still learned nothing because not all natural citrine is actually dichroic.

Situations like that are extremely common in gemology, where a distinguishing feature is a positive but can’t actually provide a negative answer or vice versa.

The above applies mainly to faceted gems. There are some ways that citrine mineral samples can be identified as heat treated:

The above can give you a good indication, at least if you have a mineral sample, of whether or not you have heat-treated amethyst or citrine.

The fact of the matter is that producing citrine through heat treatment and low-level radiation is very close to the real thing. Stones are subjected to high heat and pressure when they’re deep under the earth, as well as low-level radiation.

On a personal note, I don’t bother to make the distinction with faceted gems but I do try to be accurate when I’m selling mineral samples.

For the purist collector, citrine is always going to be a headache. The bottom line is that HTA is more common than citrine by a mile and is created through the same processes as natural citrine.

The bottom line is that all citrine should be assumed to be HTA unless you have a certificate from a licensed gemologist that says otherwise.

Where to Find Citrine

The majority of citrine comes from Brazil, either as natural points and clusters or as heat-treated amethyst. That said, there are a few places where it can be found in the United States.

The following states are known to have citrine:

Californians have a couple of choices. The first is east of San Diego near Ramona, close to the tourmaline mines of the region. In the Bay Area, you can find citrine in both Marin and El Dorado Counties. Similar to the San Diego citrine, it’s usually located near mines in the area.

In North Carolina, the majority of citrine is found in Alexander County and North County. In particular, the area around Hiddenite seems to have a lot of spots where people have found the yellow stone. There are some beautiful samples from this region.

In Colorado, the citrine crystals tend to be smaller and have a less defined structure. The citrine in this state can be seen in the area around the Honaker Trail Formation.

Remember that citrine is quite rare in nature and most of it isn’t the bright yellow that we associate with the gemstone. Instead, there may be varying colors ranging from a smoky yellow to almost green depending on the location and the stone itself.

As I noted before, digging it yourself is the only real way for purists to be 100% sure that they have a true sample of citrine rather than HTA. It may be worth the trip, particularly if you can’t quite afford to start jetting to Brazil and Russia.

As always, be careful of the laws in the regions you might be collecting in. As long as you do that you’re sure to have a good time looking for this highly sought-after crystal. 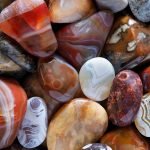