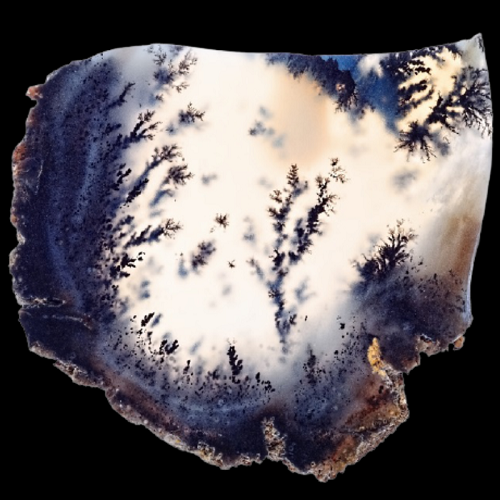 It can be hard to tell minerals in your collection apart, especially when it comes to those close in their chemical composition! Determining what you have in your collection can be a major chore for the new rockhound, so you should always be learning. For instance, what’s the difference between dendritic opal and dendritic agate?

Well, look no further! It’s time to dig in and learn how to differentiate these two stones!

What is Dendritic Opal?

Opal is a hydrated silica mineral, containing between 5-21% water in addition to silica and the various impurities that add color. Dendritic opal has black “dendrites” running through it, which are actually mineral inclusions that appear tree-like.

The majority of dendritic opal is a milky white color. It often has a blue tint around the edges of a nodule, and sometimes even blue specks.

The dendrites themselves are made of metallic oxide inclusions. These branch-like forms grow through the stone and are revealed in striking patterns after the rough material is cut.

Dendritic opal is not a form of precious opal, with its fiery way of capturing light. Instead, it’s a form of common opal. The latter is usually described as an opaque opal with no play of color. Common opal usually has a “glow” which is the strict definition of opalescence. The term is sometimes used interchangeably with iridescence to describe the fiery play of precious opal. In that case, it’s a misnomer.

Dendritic opal is commonly made into cabochons for jewelry or face-polished for specimens. Each bit of dendritic opal tells its own story of mixed metals and silica, no two are exactly alike. Because of that, the value of specimens ranges very far.

What is Dendritic Agate?

Dendritic agate is a form of chalcedony which has inclusions of iron or manganese oxide that form its tree-like patterns. In many cases, the chalcedony is quite transparent, ranging from milky to startlingly clear.

Since dendritic agate is a silica-based gemstone it’s very hard and often occurs alongside other silicate minerals when found. The main appeal for most collectors is simple: the transparent nature of chalcedony allows you to see the dendrites in all three dimensions.

Dendritic agate often mixes with other colors. Finding bits with pieces of orange or blue chalcedony in the same piece isn’t uncommon, and some of these pieces allow for the cutting of astonishing landscape cabochons.

Some colored varieties of chalcedony, such as carnelian, also bear dendrites on occasion. These stones are usually referred to by their specific name (ie: dendritic carnelian) instead of being lumped in as dendritic agate.

Dendritic agate, like many varieties of included chalcedony, has no bands. While this is sometimes considered the distinguishing feature of agate, the truth is that heavily included chalcedony inevitably gets called agate (ie: moss agate, plume agate) if it displays transparency.

Confusing these stones is pretty natural, and the majority of pictures online don’t help either. I’ve seen both labeled as the other, and with some samples, you can’t really tell without it in your hand.

They’re quite similar visually. Opal can even be a bit transparent. That said, if a stone is opaque then it’s most likely an opal, while a crystal-clear stone with dendrites is inevitably a dendritic agate.

It gets even testier when you realize that both of these stones are largely made of silica, and the dendrites can even be comprised of the same metallic oxides!

The biggest difference in the base composition of the stones is the percentage of moisture. While most opal sits at roughly 4-10% moisture, agate only has 0.4% water in its makeup. Some opal contains significantly more water, but it’s rarely seen in cut form.

The name is used almost interchangeably in the crystal trade, where you also have to deal with marketing names like “Merlinite” when trying to figure out what a specimen is. Fortunately, there’s no need to guess if you have the sample on hand.

Still, the stones have a few tell-tale qualities that you can use to tell them apart. Doing so merely by visual identification is sketchy at the best of times.

The chalcedony in dendritic agate can be quite opaque, but transparency is the best way to tell. The truth is that there’s not much of a distinction apart from that for most sellers, and an opaque sample may be heavily included agate or opal depending on where it came from.

Still, the hardness of the stones varies considerably. Opal is usually from 5.5-6 and agate ranges from 7-7.5 on the Moh’s scale. Agate is much denser as well, since it has less water, and will feel much heavier in the hand.

The differences between the stones are minor, but it’s enough to make them completely different as far as minerals are concerned.

How Do I Tell Dendritic Opal and Dendritic Agate Apart?

There are two easy tests that you can use at home to find out what you have in your hands.

The first is a simple hardness test: grab a decent knife and try scratching the stone in an out-of-sight location. This may not work with a cheap kitchen knife, which are sometimes made of softer, stamped steel rather than being forged and hardened. Some of the more exotic steels used in knives approach 8 on the Moh’s scale as well, which makes them unsuitable.

If it scratches, then it’s most likely opal, while agate won’t scratch with the majority of knives. You may want to test this on known samples beforehand.

While this is a good test, there’s some overlap between the bottom of agate hardness and the top of opal hardness. Instead, testing for the density of the stone is the best way to tell which form of amorphous silica you have.

Using a graduated cylinder or other volume measuring device, you can drop the stone in to measure the volume. Remember to be as precise as possible. Measure with the meniscus, or the bottom of the curve as the water clings to the sides of the container.

Then you’ll want to throw the stone on a scale to find out how much it weighs. In most cases, you’ll only need to measure to tenths of a gram, but you may want to measure in hundredths. Scales that can handle the job are numerous.

Convert the measurements to milliliters and grams. The majority of available geological information uses the metric system.

Divide the mass of the stone by the volume of the stone. You’ll end up with a figure that’ll let you know.

Density does change a bit based on inclusions but there’s a 25% difference between opal and agate on average, not enough for a few internal dendritic crystals to throw you off.

Agate’s density is in the 2.6-2.7 g/mL range, while opal will usually be somewhere between 1.9-2.4. If you find yourself in the interim, you’ll need to do hardness testing as well to confirm your findings.

But the goal is the same: to figure out which type of stone you hold in your hand. In either case, it’s hard to lose with a sample of one of these beautiful stones! 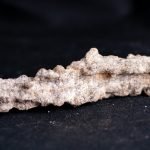 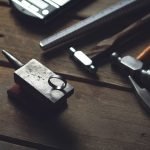