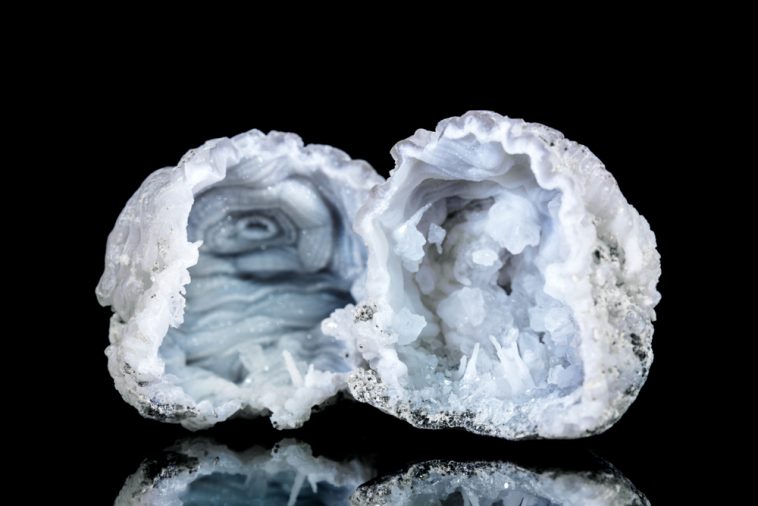 Sparkling rocks get the best of us, and druzy quartz is readily available and beautiful. Druzy comes in as a light coating of sparkling crystals, but where does it come from? Why does a stone form a druzy coating instead of growing normal quartz crystals?

You’re in the right place! Read on and we’ll show you the answers to your questions about druzy quartz.

What is Druzy Quartz?

Druzy is a light coating of small crystals on the exterior of another stone. Druzy quartz often occurs on chalcedony, forming a sparkling layer over the microcrystalline silica that makes it up.

The name druzy and druse are used pretty much interchangeably, but we’ll be sticking with the first version for this article. Just be aware the terms mean the same thing when you’re looking at specimens or looking up places to find some.

The coating is, of course, made of quartz. The attraction is all in the sparkle, once a druzy surface is cleaned up it creates tons of little bits of reflected light as the stone is moved. It draws the eye, and it can result in incredible specimens.

The actual coating itself is crystallized quartz in a tiny form. It can form on the surface of other crystals as well as inside vugs in nodules of other materials or in the seams between stone layers underground.

While it looks very different from normal crystallized quartz, it’s pretty much the same thing.

Just much smaller than we’re used to seeing.

Some druzy specimens are dyed in order to increase their appeal and value.

That’s fine for casual collectors, but it does mean those who only want natural stones should be on their toes. The dyed specimens are usually disclosed these days, but that doesn’t mean people won’t take advantage of trusting individuals.

Druzy is also sometimes coated with thin metallic layers, creating “aura druzy.” These coatings are identical to the ones used in making things like mystic quartz.

As a general rule, plain chalcedony or quartz with quartz druzy on them aren’t exceptionally valuable. On the other hand, rarer formations incorporating stones like malachite can be quite expensive and very rare.

Most druzy we come across will be in other stones, its more of a bonus to what you were looking for than something you specifically set out to find.

How Does Druzy Quartz Form?

Druzy Quartz forms from repeated evaporation of silica-rich waters on the surface of an existing stone, rather than forming directly. This coating takes millions of years to form, as the silica deposits continuously re-crystallize on the surface of the stone.

That’s why it’s mainly found inside geodes and seams in the bedrock. They’re considered a second-generation formation since they form separately from the stone that they’re coating.

Essentially, druzy is a secondary coating that’s formed on the surface of a stone after its initial formation. In this case, it’s quartz but that’s not always the case.

Druzy quartz can form on a wide variety of different stones. Among some of the more collectible are malachite and chrysocolla, both of which can be found coated in minuscule quartz crystals that give them a silky sheen.

I’d say 90% or more of the market for druzy specimens is taken up with quartz druzy. It’s the most commonly seen among a wide variety of different base stones. That said, it’s not the only stone that forms druzy coatings.

Do Other Crystals Form Druzy?

Other crystals can also form druzy, through the same process as druzy quartz. Among the most common are garnet, dolomite, and calcite. All of these form crystals on top of other stones, creating a coating that resembles quartz druzy.

Compared to druzy quartz, these are all rather rare and tend to occur in specific formations.

There are also some stunning examples of amethyst and smoky quartz druzy, but both of those are simple varieties of quartz. All that’s needed in those cases is for a bit of iron to make its way into the silica-rich hydrothermal fluid that creates other quartz druzy formations.

That said, not all that glitters is druzy quartz… just most of it.

Where Can You Find Druzy Quartz?

Druzy quartz is a common find across the United States, anywhere that agate or quartz can be found there’s some druzy nearby. Pieces of it in various conditions show up in most places that are worth rockhounding.

That said, the majority of these pieces are a bit unimpressive. They’re a common find in the nearby National Parks I frequent, but perhaps one out of ten specimens is actually worth bringing home.

I’m actually not sure there’s anywhere specific to dig up druzy quartz specifically. Your best bet is to find it anywhere you’d normally find agate, quartz, or geodes. The latter are often the best place to find druzy quartz formations, especially if you want a sizable chunk.

Druzy quartz is best thought of as a feature of other stones, rather than being considered on its own. The majority of druzy formations available on the market are simply druzy quartz on chalcedony. This is also the form you’ll see used in jewelry most often, since getting “cabochons” requires a large bit of base material.

It’s best to think of druzy quartz as a bonus when you’re looking for other stones. That said, some areas are known to house more of it, so check out your local rock and mineral clubs to see if there are any great spots!

While druzy is commonplace, there is still a lot of fun in finding that sparkle. Whether it’s cracking a geode, slicing into an agate, or just a nice layer of quartz crystals that formed in a seam in the bedrock. 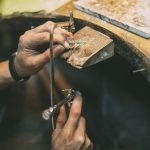 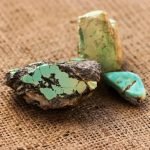