Agates are some of the most sought-after collectible stones. They’re reasonably priced and range from pretty to shockingly beautiful depending on the variety and individual formation of the stones. There’s just a lot to learn about this translucent, cryptocrystalline chalcedony!

So, let’s go ahead and start digging with a few of the most interesting facts about agate!

1. Agate Exists on a Mineral Spectrum

Agate is harder to pin down than people think, especially if you consider non-banded varieties like moss agate to be a true agate.

Agate is actually part of a spectrum of different varieties of cryptocrystalline silica. Other varieties with similar properties include chert, flint, and even jasper. Agate itself can be defined in a couple of different ways.

The first has to do with banding. A silica-based stone that has strong banding patterns is almost inevitably referred to as an agate, at least if it has any sort of translucency at all. Fortification and waterline agate are both varieties that show this property by their very nature.

The other is to refer to any included chalcedony with transparency as agate. This is the case for some of the most famous types, such as plume agate, that may actually lack agate’s characteristic banding patterns. I’ve yet to hear anyone arguing that moss agate, for instance, isn’t an agate despite a lack of banding in its most common presentation.

On the other hand, a patterned, colorful microcrystalline quartz stone that is 100% opaque is usually a jasper. If it’s dull-looking it may be referred to as a chert. Flint also exists in this spectrum, as a subvariety of chert.

Chalcedony, on the other hand, is often used to refer to high clarity cryptocrystalline quartz of various colors… even if it has significant amounts of banding. It is distinct from jasper or chert, however, due to the fibrous nature of the crystals.

But agates share the same internal structure as chalcedony (fibrous silica), and indeed are chalcedony with inclusions.

So are the rest of us!

While agate exists in this strange cryptocrystalline spectrum, it’s easier to define them in common terms. Agate is a translucent variety of chalcedony with strong banding patterns and/or distinct inclusions.

2. Its Use is Ancient

Agate has a long history of use by humans. It’s easy to see why: it’s a very hard, very common stone that rarely requires serious mining to pull from the earth. Indeed, the easiest way to find agate is just to walk creekbeds in areas where they’re found.

And that’s just about everywhere.

It’s also immediately recognizable as “something” when wet. While dry creek beds are my favorite place to hunt for stones, agate nodules are obvious to the trained eye when they’re in a running creek or stream.

Just look for the color.

It’s also hard, capable of taking very fine detail even with primitive tools. Artifacts like the Pylos Combat Ring are highly detailed works of art, and often truly ancient. The Pylos Combat Ring, for instance, is known to be over three thousand years old.

While that sounds old, there are older agate artifacts out there. A 15,000 year old knife blade has been found, for instance.

Its use in jewelry also dates back thousands of years, with it being a common talisman material among the ancient Egyptians as well. There are even 9,000 year old beads that have been found made from the material, proving that people thought it was worth the long, arduous task of drilling stone with primitive tools to use them as decoration.

The properties of agate lend it well to being worked with primitive tools. It’s hard, but not punishingly so like beryl or corundum gemstones, common, and the inclusions often become part of a greater whole during the creation of a piece.

While all gemstones are ancient in a geological sense, agate has been with us for much longer than many of the stones we more commonly think of as gems.

Due to its fine graining, agate displays conchoidal fractures. Most minerals have some plane of cleavage, where the stone will preferentially break. In fine-grained stones like agate, there is no plane of cleavage and the breaks occur in a different fashion.

This has serious implications for working with the material with crude tools. It makes it possible to both work the material using precise impact and for the material to hold an edge.

The most famous example of conchoidal fractures in nature is obsidian. Obsidian has been prized as a material to make knives, arrowheads, and spear points for a lot of human history. The volcanic glass can hold a monoatomic edge when freshly knapped. Indeed, obsidian blades are so sharp that exposure to air dulls the blade from its original edge.

Agate doesn’t appear to have been widely used for practical articles, but examples have been found. Among the modern knapping community it’s often used for its bold patterns and coloration, which take precedence over the inferior edge the material holds.

All of this makes it a great base material for modern knappers and the few older artifacts found appear to have been mainly ceremonial in use.

The heat treatment process is surprisingly low-tech. Evidence of heat-treated red agates (and carnelian, a red variety of chalcedony) dates back over 4,000 years.

4. A Lot of Agate is Altered

A lot of newbie rockhounds see the brightly colored agates available with most stone sellers and think they’re real. Unfortunately, extremely bold, deep colors are usually a sign that a stone has been altered, especially if they’re in a single hue across the entire stone.

You also have modified stones like Dragon’s Vein Agate, which is heat-treated and stressed to produce cracks before the dye is applied.

This alteration can seem a little bit dishonest, but modern dyeing techniques have been around for 200 years and there’s evidence that even the Ancient Romans engaged in some degree of dyeing the stone.

Agates are dyed in a simple process: they’re dumped in a barrel full of dye for a few months and then removed and dried. Without stress fractures it can take months for the dye to actually permeate the stone’s surface, most dye techniques leave much of the internal stone unaltered.

Dyed agate should be appreciated for what it is. The lightly colored, banded agate that’s generally used for the process isn’t visually interesting in most cases and it’s not really done to deceive. Anyone interested in agates will soon realize the stone doesn’t come in a deep purple, striking blue, or emerald green color without being altered.

Still, agate appears to have one of the longest histories of alteration. Less colorful varieties are often enhanced instead of being discarded, and bulk amounts of largely white agate can be found in many locations.

Still, it’s important for a newbie to know the difference.

5. Agate is Still Used for More than Decoration

Agate is smooth, hard, and relatively easy to work with. That makes it a great choice for many tasks, and it still finds its place in tools in addition to being used for decorative purposes.

Above you can see my agate burnisher. It’s basically just a shaped bit of white agate stuck on a stick, but the smoothness and hardness of the material allow it to rub over (or burnish) the surface of soft metals like silver.

While rarer these days, agate was often a key component of knife-edge bearings for precision use such as laboratory scales. The material’s smoothness and ability to resist chemical corrosion make it an excellent choice in those situations since the material won’t wear away coming into contact with metals.

You can also find guitar and bass picks made of the material. They produce a unique sound when used, and the material holds up while quite thin.

It’s also used as a mortar and pestle occasionally. Agate, as noted above, is made of silica but unlike glass, it has enough toughness for this kind of use. There are ceramic materials with similar properties available these days, but they’re just not as attractive overall.

Essentially: agate finds its use in many things where the material is required to be smooth, hard, and durable over time. Its prevalence isn’t quite what it used to be, but it’s still very much a part of our present world.

From ancient history to contemporary use, agate has been with us for a long, long time. And, as things stand, it looks like it will continue to be! 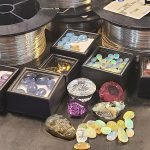 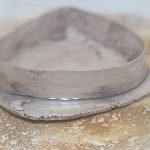