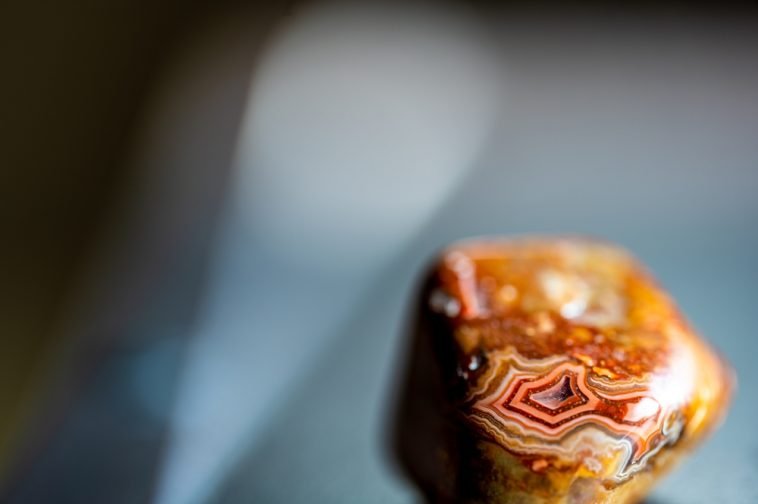 Fairburn Agates are among the most prized stones from North America. These richly colored fortification agates are distinctive, rare, and sometimes valuable which makes them a staple in the collection of rockhounds in North America.

The question then, is what defines them? And where can they be found? Read on and I’ll give you the answers you’re looking for!

What Are Fairburn Agates?

Fairburn Agates are a specific variety of banded chalcedony that show up in South Dakota and Nebraska. Like all agates, they’re comprised of silica and impurities that give them colors, along with the distinctive banding that gives the family of stones their name.

These agates are quite rare, and great specimens are even rarer. For that reason, they aren’t popular as jewelry stones, and even tumbling can sometimes be considered destructive. Instead, the majority of them end up as specimen pieces with either one face polished or just a bit of cleaning depending on the surface consistency of the individual stone.

Their distinctive pattern is what identifies Fairburn Agate from the other jaspers, agates, and various forms of silica that litter the prairies. They tend towards the more opaque side of things, compared to most agates.

The most distinctive feature is the “holly leaf” fortification of the agates. “Fortification” is simply used to mean that the different bands form complete circles.

While most agates have some sort of banding, the banding in these fortification agates has sharp corners and internal curves that lead to an almost scalloped appearance. Fairburn Agates in particular are known for the sharp points and inward curves that make up the bands.

These agates mainly come in earth tones. Reds, oranges, and even a bit of brown are to be expected. Other samples will include blues and yellows, and the best will emerge with bright color variations that pop out at you immediately.

That said, the defining features of Fairburn Agates are the fortification pattern and locality where the stone is found. Similar agates can be found across the world with their own unique characteristics, but Fairburn Agates are rare and that increases the amount of respect the stones receive from collectors.

What Are Fairburn Agates Worth?

And also the price. A “regular” Fairburn can be worth $5-50, and better specimens worth much more. It’s not uncommon for large, museum-grade stones to be sold for over $1,000 and the most expensive on record went for a jaw-dropping $13,000.

There is a little bit of controversy about what makes up these agates, which fall into the Fairburn category, and where they can be found. Essentially: there are a few different varieties of fortification agate that can be found in the prairies and some people believe that the majority of these are simply a different type of Fairburn Agate.

Discussions like this keep some of us up at night, but for the rest?

Fairburn Agates are a prairie agate with scalloped fortifications. The rest is a battle of semantics that’s best left to academics. Fairburn Agate is a simple, descriptive name that works for anyone who’s not observing thin strips of material under a high-end microscope.

Where Are Fairburn Agates Found?

The area between the Black Hills and Badlands National Park in South Dakota seems to be the most famous place for these stones to show up. There is also a limited amount of them in Nebraska.

For the most part, Fairburns are rare but show up all over the area. One of the better hunting grounds is to the East of the 79 south of Rapids City. This area seems to produce quite a few of the stones, and you can follow trails or wander around with a chance of finding them pretty much until you hit the Badlands National Park properly.

Determining where to go hunting for Fairburns can depend a lot on your personal definition. Some are insistent that the only locality that can produce “Fairburn” Agates is near the original town they were found. Others go much broader, lumping in Fairburns with all fortification agates from the same region.

The good news is that they’re not super-concentrated in one small area.

The bad news is that there’s a large area to find them with a hodgepodge of different laws governing where you can legally collect these stones.

For instance, if we go off the 79 as described above you have two very near jurisdictions to deal with. Badlands National Park doesn’t allow any collecting, which is the norm for National Parks in this country. On the other hand, Black Hills is also a National Park but does allow for surface collection of specimens.

Then there’s private property to deal with, where collection is completely illegal without the landowner’s permission. And far more likely to get you in trouble than a handful of illicit rocks from a National Park.

On the other hand, there are highway cuts and gravel pits in the area on public land where you can collect without worrying about restrictions.

So, a lot of finding Fairburn Agates simply comes down to one thing: making sure that you know the local laws and the specific zoning laws of the area you’re collecting.

With the value of these agates so high, it’s important to note that many of the public areas have been well picked over. There’s still plenty of exciting material to be found in this region of the Great Prairies, but finding a Fairburn Agate is far from guaranteed.

What to Do With Fairburn Agates

If you’ve managed to collect a few of these stones, you should carefully consider what to do with them.

There are several schools of thought when it comes to these stones.

Clean, raw stones are the preferred method for high-quality agates at the moment. Whether or not people prefer their samples polished seems to depend on the decade and a lot of people currently find the natural form quite pleasing.

The majority of larger specimens should be kept this way if you’re planning on resale at some point. Not only is it the “fashionable” way to keep rare agates at the moment, it also preserves their retail value if you want to do something else with them later.

Face polishing is my preferred method of keeping raw agate nodules. You can use a lapidary machine or hand tools to produce the effect, and a well-done polish will reveal details in the coloration and other inclusions that nature can’t quite match.

Rare agates aren’t cut into cabochons too often, and for something like a Fairburn Agate, you need an experienced hand. Not because the stone is difficult to work with, but because not everyone has the eye and touch to produce high-quality cabochons from slabs of this kind of material without compromising the high initial value.

Mine wait for the saw, but I’m a jeweler and most of my collection is destined to be set. It’s often best to preserve agates as cleaned but in their natural state to maintain value. 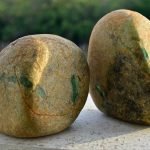 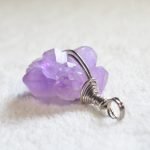