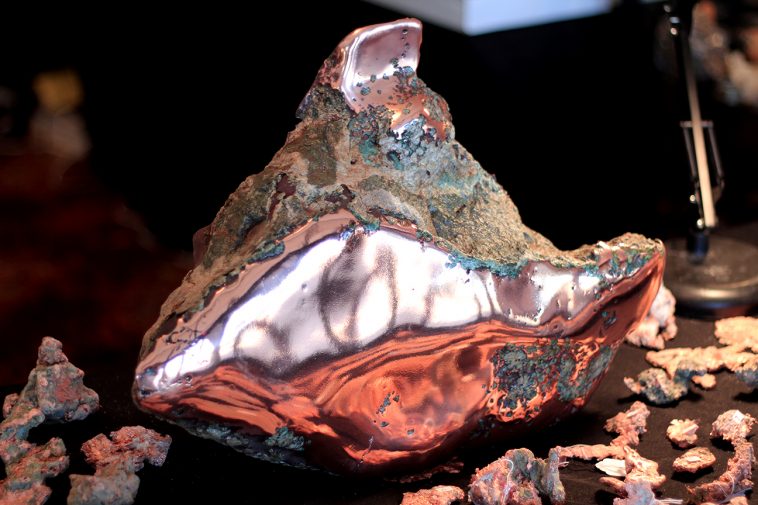 When you first hear float copper, the term can be confusing. After all, isn’t most copper locked into stones like malachite due to its reactivity? Most of it is, but strange pieces of metal have shown up in areas where it has no business being.

So, let’s take a look into the fascinating history of float copper.

What is Float Copper?

Float copper is native copper which has been moved from its original location by the action of glaciers. Glaciers are one of the more common sources of stones moving throughout history. As they moved and melted they leave behind nodules and masses of material from other areas.

Float copper can range from a few grams of material to many tons. The most famous piece of float copper is the Ontonagon Boulder, a 2-ton boulder discovered on the Upper Peninsula of Michigan.

Float copper is comprised of native copper. Native metals, such as silver or gold, are high-purity metallic forms of their namesake element. So native copper is essentially copper that existed in an elemental form before removal from its original area.

Copper is rarely found in this form, due to its high chemical reactivity. Much of the time when copper is found the deposit is in the form of malachite or other copper ores that are the usual source of the metal.

Native copper was very important to the natives in the Americas. Lacking a good source of iron, apart from the occasional artifact that may have washed up, copper was the metal of choice. Copper is usable as a knife, axe, or other tool but it’s not quite as durable as even raw iron, let alone steel.

Copper can be heated and worked very easily, and annealing is a simple process. The copper is simply heated and quenched which will allow the metal to be worked again until it becomes hardened. Copper’s ability to be readily worked makes up for some of the difficulties it faces as a tool with lower technology.

There’s actually some debate about how they used copper, whether it was smelted or simply worked raw. There’s evidence of heavy copper use by people in the area of Michigan, but not much is known about the people themselves. Archaeologically they’re referred to as the Old copper complex.

The biggest debate is about whether or not they engaged in metal casting, which would have been a very advanced technology at the time the artifacts are dated to.

This region contained much native copper, a relative rarity in many places of the world. Indeed, the Keweenaw Peninsula is the largest known deposit of native copper in the world. Other rich locations are found in Kazakstan and Bolivia.

Float copper comes in many shapes and sizes, but it’s rarely the same cubic form of native copper seen in deposits that weren’t moved by glaciers.

What Form Does Float Copper Take?

Most of the native copper brought from the north by glaciers is indistinguishable from other native copper nuggets. It appears that crystalline forms are less likely to have survived the transport intact.

Float copper is sometimes found as enormous boulders as well. These boulders are prized, and one of the largest was even moved to Washington D.C. for display.

You’re not so much looking for a copper color as you are the oxidation pattern on the exterior of the metal. Copper forms brightly colored salts on its surface on contact with air, which is responsible for the green patina sometimes seen on old copper statues.

Indeed, copper is a “live” metal. When worked it oxidizes rapidly, especially when heated. Over time it will form a crust of green salts when exposed to air, but oxidation can also be controlled with a torch and used to “flame paint” pieces of the metal.

Most float copper will take the form of small, rounded nuggets with a green and black crust.

If you’re not already familiar with the look of copper salts then the best examples can actually be found by looking upwards. Copper is sometimes used as roofing tiles and the patina formed on them is very natural in appearance. You’ll note the mottled mix of blue, green, and black on them and this is what most native copper found will look like.

When found underground some pieces may retain the copper color but the majority will still be oxidized. Copper is a very dense material, and you’ll quickly learn how to feel it out.

Where Can Float Copper Be Found?

The vast majority of float copper can be found in Michigan but there’s a considerable amount in the surrounding areas as well. The ancient glacial movement has gifted the area with a lot of incredible minerals and spread them across very wide areas.

This is one of the largest native copper deposits in the world. The area was mined extensively, starting in the 1840s, due to being so rich in orange metal. The area where float copper is most heavily concentrated is in the region that’s known as “Copper Country.”

The Keweenaw Peninsula is still the best place to look, although much of the material has been mined out. You can still find small nuggets and pieces in the region if you’re lucky and considerably more if you can gain legal access to mines in the area.

Some can also be found in Minnesota, but not in the same quantities.

Float copper will appear grey or blue in the field due to the surface oxidation of the copper. Often these nuggets are left untouched, sold with the natural patina still on their surface. Other specimens are cleaned, but this occurs less frequently unless the copper is in cubic crystalline form.

How Much is Float Copper Worth?

Oddly enough there’s a big value in these little copper nuggets. Float copper is worth far more than the weight of the metal, and specimens vary in price.

Larger pieces and pieces that have obvious native formations like cubic crystal systems are worth far more than simple nuggets. Very large pieces can form the centerpiece of professional collections and are almost priceless, essentially worth what the highest bidder will pay for them.

If you’re just looking for a smaller piece of copper and aren’t looking for anything particularly special about it then you’ll be looking at ~$15-20 for a piece an inch or two across. Smaller specimens can still be worth more, depending on the configuration of the copper.

Unlike most native metals, the actual value of float copper doesn’t really take into account the weight. Copper’s worth per pound is enough smaller than the value of the native form that it doesn’t really matter either, unlike when you have a gold or silver nugget.

Those looking to profit from float copper should look for unique and large pieces. The price differential between these and the lower end of things is enormous. The good news is that there’s still a thriving market for native copper, with pieces being bought and sold on a regular basis.

One more thing: if you plan on selling your float copper then do not touch the patina. The patina actually adds value in most cases, and it’s less work on your end. At times display specimens may have one or two polished areas to showcase the stone as copper, but this is usually only done on very heavily oxidized specimens. 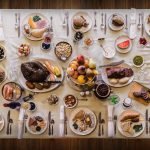 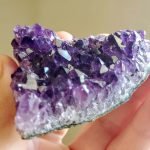