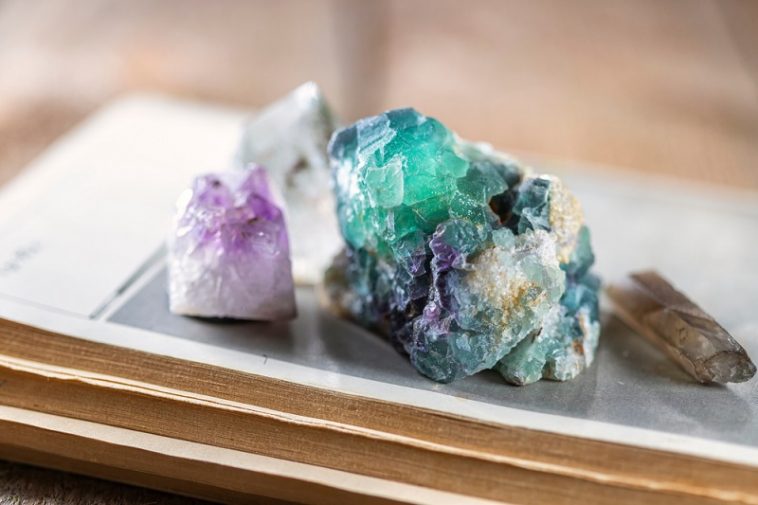 Amethyst and fluorite are two beautiful purple stones (or, with fluorite, green, pink, brown, and more). They are commonly available, inexpensive, and find their way into a rockhound’s collection quickly. The first rocks I bought from a rock shop were a large bag of rough amethysts for $13. While they can look similar, you can easily tell amethyst and fluorite apart using the tips in this article.

Fluorite is a stone of many colors, one of which is purple. Greens, blues, and browns are also common. Purple fluorite can look a lot like amethyst, and we will help you determine which purple stone you have, lower in this article.

The name comes from the Latin fluere, which means to flow. It got this name because it melts easily. The word fluorescence comes from fluoride, not the other way around.

Calcium fluorite (CaF2) is one of the halide minerals. It forms at shallower depths and cooler conditions than amethyst.

Fluorite is a common stone, but most commercial fluorite comes from China, Morocco, and Illinois. Fluorite comes in many crystal forms, including cubes, octahedrons, and more forms. Most fluorite will glow or fluoresce under black light.

The large and varied crystals, range of colors, and fluorescence all make this mineral popular.

How Is Fluorite Formed?

Fluorite formed late in the geological processes which created igneous rocks, because of its low melting point. Geologists often find it in granitic pegmatites. They also find it as a vein deposit in limestone and it sometimes colors marble. Lead ore (galena) can frequently be found nearby.

In the past, people called fluorite fluorspar, but today we reserve this word for industrially used stone.

Fluorite is useful in several forms. You can grind it down to make fluoride for toothpaste. In the US, we make most fluorite into hydrofluoric acid (HF), which is used in creating many chemicals, and aluminum fluoride (AlF3), for making aluminum. Both fluorine and fluoride come from fluorite.

It helps in smelting iron, bringing down the melting temperature of iron. You can make excellent lenses from thin slices of fluorite. We use most of these lenses for microscopes because they tend to be small, coming from a natural facet.

How to Identify a Fluorite

Fluorite comes in a variety of colors, of which purple is common. It is a softer stone and dissolves in water. Most fluorite will glow under a black light. And most fluorite has cubic or octahedral crystals.

Amethyst is purple quartz and a silicate (SiO2). Available in many shades of purple, from pale pink-purple to deep, dark purple, it is popular to use in jewelry. Color gradients change throughout the stone.

The name amethyst comes from the old Greek amethystos, meaning intoxicate. The Greeks thought the stone, formed into a cup or placed within one, prevented drunkenness. Any cup made out of amethyst, in those days, would be quite small because of the price and drinking from tiny cups may limit intoxication.

Once, people considered amethyst to be a precious stone, along with diamond, ruby, and emerald. In the 18th century, explorers found enormous quantities of the stone in Latin America, lowering the gem’s price, but not its beauty.

How Is Amethyst Formed?

When lava flows from a volcano, it cools with many air bubbles inside of it. These bubbles can be tiny, or as large as the geode found in Pingyi, China. The Pingyi Geode is the largest amethyst geode, measuring nearly ten feet long, nearly six feet wide, and over seven feet thick. It weighs 28,660 pounds.

The lava cools, leaving these pockets behind. Gradually, the silica-rich liquid slowly flows in. Over a great number of years, amethyst (or other crystals) form inside.

Amethyst starts as quartz with trace amounts of iron in it, along with other trace minerals. Mostly, the purple color comes from iron oxide (rust) trapped in the stone. When meeting underground radiation, the stone turns to a glorious purple. As quartz, it has a hardness of 7 on the Mohs scale.

Amethyst is famous for forming clusters, large crystals, and geodes. Brazil and Uruguay provide most of the amethyst currently on the market, but you can find it in many places, including Siberia and Sri Lanka.

You can sort amethyst in several ways. One is by the location where people mine it, giving it a place name to distinguish it. Most jewelers sort amethyst by the depth of color, where deep purple is most highly desired. Inclusions of other stones or a bronze tint bring down the value of the stone.

Jewelers sort most amethysts by color, which varies by the amount of iron (and other trace elements) in the stone and the amount of radiation that passes through it. These colors range from pink, through all the purples, to black.

Lavender, violet and light violet stones are all common, and popular to use for making jewelry and decorating. Green quartz (prasiolite) and citrine (yellow, orange, or brown quartz) are amethysts heated in the earth or in a lab. Chevron amethyst has bands of purple amethyst and white quartz.

How to Identify an Amethyst

Amethyst is most commonly purple, although it can be pink and is frequently mixed with other colors of quartz. It is a harder stone and does not dissolve in water or glow under black light. Most amethysts have six-sided crystals that come to a point.

Similarities Between Fluorite and Amethyst

You can find both stones in crystal forms, although their shapes differ. Both can also be purple, but that color alone is no guarantee. Both stones will, over time, fade when exposed to bright light.

Differences Between Fluorite and Amethyst

You can often tell the difference between the two by looking carefully, particularly if the stones are in their crystal forms.

Amethyst forms a six-sided crystal, often coming to a point. It fractures into smooth surfaces that are often curved in a concave shape. We call this crystal shape hexagonal.

Fluorite most commonly comes in cubic or octagonal crystals most of the time. It is an isometric (cubic or compact and symmetrical) form. If you see a lot of right angles, the stone is probably fluorite.

If you hold the two stones up to the light, fluorite is often more easily seen through than amethyst is – although both are translucent.

Larger samples of fluorite often feature color zoning. You will see banding of different colors within the crystal. But this can be tricky.

How To Tell Them Apart

Fluorite will dissolve in water. Amethyst will not. If you place your fluoride in water, it will slowly shrink and disappear. At low levels, like fluoride in drinking water, it is completely safe. However, at high levels, it can be poisonous. Do not drink water in which fluorite has been soaking, just to be safe.

One of the most certain ways to tell the two stones apart is hardness. Amethyst is a hard mineral, with a hardness of seven on the Mohs Hardness Scale. Fluorite is much softer, measuring a four.

This makes fluorite less popular for gemstones because it scratches so easily when worn. So, if used for jewelry, it is likely to be an amethyst.

Another good way to tell the two apart is to look at them under black (or ultraviolet) light. Fluorite will often glow under that light, but maybe only partially or a little bit. Amethyst will not glow. If the stone glows, you know it is fluorite. If it does not, however, it may still be fluorite or it may be amethyst.

Can I dig these gems in the US?

Yes. While the larger deposits are elsewhere, you can dig for amethyst in Arkansas, Georgia, and Arizona. You can dig for fluorite in Illinois and across the central United States.

Where can I find these rocks?

Any rock shop, whether online or in-person, will sell these stones. Amethyst can be found in many more places as it is the most popular rock for jewelry and decoration. I’ve even seen it at my grocery store.

What can you use amethyst for?

Artisans turn amethyst, with its low price and bright color, into jewelry and decorations. People who use crystals for healing use amethyst to fight anxiety and increase spirituality.

What does amethyst symbolize?

Once, the stone symbolized sobriety. It became a stone for royalty because of its purple color. Today, a gift of amethyst symbolizes peace, calming, and cleansing.

Can fluorite poison you if you wear it?

No. Fluorine is nasty, but the calcium in fluorite makes it stable and safe.

What color is fluorite, really?

Is fluorite rare or common?

It depends on the color. Purple fluorite is common. Rare colors include: blue, yellow, pink, black, and colorless.

How do you keep these stones from fading?

They do not fade quickly. If you keep them in a box or darkened room when not wearing or using them, their colors will last for a long time.

Mostly. Out of all citrine, 95% is heat-treated amethyst. The rest, largely from Zambia and the Congo, met its heat underground, and people call it natural. 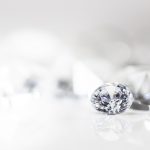