In 2001 Peru announced that they had found giant fossilized clamshells way up in the Andes mountains. But were these really giant clam fossils? Or were they something else?

This person who posted this video wanted to see them for herself to try and decide once and for all what they really were. So in 2021 she set out on her own to travel all the way to Peru to try and locate them. And as if that wasn’t crazy enough, all she had to go off of was an old article written in Spanish and a couple of old, low quality photos.

Now, I don’t know if you’ve ever traveled through the Andes mountains, but it’s significantly different than what most of us have ever experienced. Narrow, muddy roads with sheer drop offs right outside the window was the norm once she and her taxi driver started making their way higher and higher into the mountains.

But no matter how hard they looked and how many people they talked to, they could not locate the fossils. And just when she had given up all hope that they would locate the fossilized clam shells, they had turned a corner and there they were!

What Did She Find?

After making the incredible journey all the way up into the Andes mountains all on her own, what she found were a number of large stones that looked a lot like enormous bivalve fossils. They were all different sizes, lengths and thicknesses. An incredible find, that’s for certain.

But is what she found really giant fossilized clam shells? Take a look at the video and see for yourself. I’ve made my determination and I’ve expanded on it below.

Are These Giant Fossilized Clams or Concretions?

As cool as it would be to say that these are the ancient fossils of gigantic clams, it’s just not the case. What the adventurer in the video found were in fact large concretions, specifically calcareous concretions.

Concretions are a very strange and unique geological phenomenon. For an excellent example of another type of strange and bizarre concretions, go take a look at these Moqui Marbles.

According to the Paleontological Research Institution,

“Concretions are commonly misunderstood geologic structures. Often mistaken for fossil eggs, turtle shells, or bones, they are actually not fossils at all but a common geologic phenomenon in almost all types of sedimentary rock, including sandstones, shales, siltstones, and limestones.

“Concretions form inside sediments before they harden into rocks, when they are still soft, as minerals within a sediment precipitate, sometimes in successive layers around a nucleus such as a shell or pebble. Rates of this formation vary, but can sometimes apparently be relatively rapid, over as short a period as months to years.” 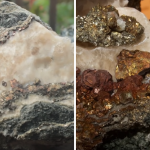 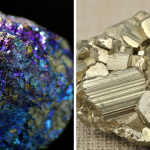