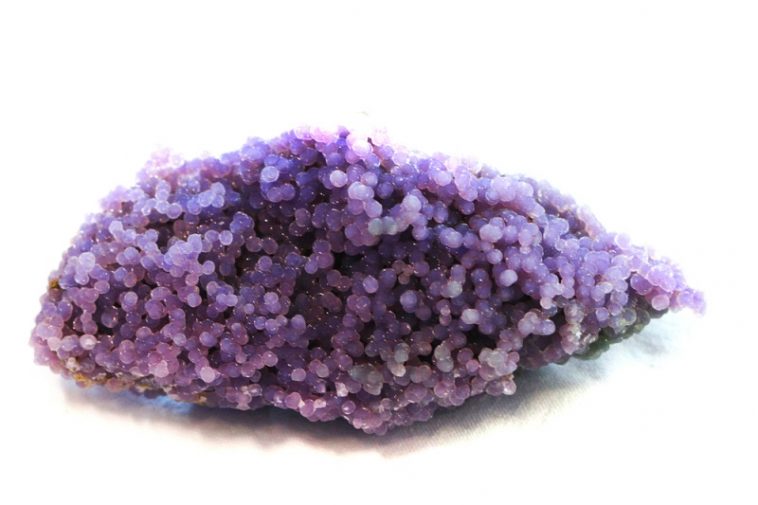 Ever wonder about those little purple clusters of chalcedony? Grape agate makes for an impressive display specimen, with deep coloration and a readily seen structure. It’s also relatively new to the market, and many collectors have their questions.

So, if you’ve ever wondered about grape agate then read on, and we’ll dig into the matter together.

What is Grape Agate?

Strictly speaking, Grape Agate is a botryoidal formation of purple chalcedony-ish material. Most specimens have a relatively rough texture along the outside, rather than being perfectly smooth.

Some specimens also come in green, and bi-color specimens are highly prized.

How Rare Is Grape Agate

This mineral is a rarity, and only recently discovered. While the material is certainly out there, A-grade and higher specimens aren’t cheap. Some of it finds its way into jewelry as well, particularly in high-end wire wrapped pieces, since it’s easier to set in a natural form.

Grape Agate seems similar to amethyst at first glance, but the spheres themselves are actually microcrystalline quartz that grows radially rather than the macro crystals that characterize quartz varieties like amethyst. They’re a bit hard to define, but they’re neither chalcedony nor classic amethyst crystals.

The term usually used for this form of silica is amethystine.

How Does Grape Agate Get It’s Color?

The coloration of grape agate appears to come from some form of clay inclusion, although it’s also been said to have the same coloring agent (ie: iron) as amethyst. The green varieties come from a different inclusion in the clay, and there are also many specimens with minimal coloration.

Not a True Agate

Grape Agate isn’t actually an agate. There is no internal banding, and the stones are comprised of relatively pure silica without the plume, moss, and other inclusions common in agates. The name has stuck regardless.

Grape Agate is graded by coloration for the most part. Bold colors tend to command a higher price, as do larger specimens.

What To expect When Ordering Grape Agate Online

It should be noted that you’ll often lose a “grape” or two during transit when ordering specimens. They’re well-attached, but break-offs are a regular occurrence during shipping. These are often repackaged and sold in gemstone bottles and other kitschy objects you’ll find in some crystal shops.

The majority of specimens will have a wide size of “grapes” across them. These can range from 2-20mm in size, depending on the individual specimen.

Is There Fake Grape Agate?

There isn’t really a market for a completely fake grape agate. Using the usual suspects, like glass, would take far too long and be too labor-intensive to make any money for the seller.

That said, I’ve seen the occasional specimen from the very early days of this material hitting the market. These were usually quite rough, with carving marks readily apparent. The biggest tell was the consistent, large size of the spheres. Each sphere was roughly the size of a marble in most cases.

The few I’ve seen were very obvious to the trained eye. Bad dye jobs and rough carving seem to have been the rule, just fakes formed from dyed chalcedony. It’s hard to fake a Grape Agate specimen without having to carve real stone, and the practice appears to have fallen off as the material became more common.

How To Spot Dyed Specimens

What you will run into are dyed specimens. The simple addition of a purple dye can make a piece of grape agate worth much more than if it only had pale coloration. Grade A+ specimens get expensive, and some unscrupulous dealers will take advantage of that.

Most dyed specimens will be a single color, almost always purple, and it can be hard to detect if you’re buying online without very high-definition photographs. If a deep purple piece of Grape Agate appears cheap… you’re probably looking at a dyed specimen.

Once it’s in hand, it can be a bit easier to tell. The best way to tell is to soak it in water, or even a bit of acetone, and see if the solution changes color. If it does… well, you have a dyed specimen. Natural grape agate won’t discolor either.

Note that, like amethyst, grape agate will begin to lose color after extensive sun exposure. Thus, a specimen fading isn’t 100% proof that you have a dyed specimen. Make sure to store it out of direct sunlight when displayed.

Where is Grape Agate Found?

Grape Agate is actually found in only one place in the world. The Manakarra Beach in Indonesia appears to be the first place that miners discovered it, shortly followed by a minor rush of people trying to get more of it. The material was instantly recognizable as being unique, which is rare for a modern mineral discovery.

The material was originally sold as Manakarra Grape Agate before the trade name simply became Grape Agate. The Beach is in Western Sulawesi, an island in Indonesia.

It appears that the material first showed up on the market in about 2016. Usually, when we refer to “recent” mineral discovery, we’re talking about in the past 40 years but in this case, it’s a very recent addition to the trade.

The samples which emerge from this area are colored white, purple, and green depending on the exact deposit. It appears to occur in the seams of the volcanic bedrock of the island. It’s not sure exactly why the crystals form in this fashion instead of one of the more common ones found across the rest of the world.

In addition to the Manakarra deposit, there appears to be a small amount of botryoidal quartz coming out of with a red coloration. The spot appears to be near the Green River, and it’s listed on ’s official page for mineral collecting.

The material from the Green River Agate Beds often appears sketchier in color than most of the sold Indonesian material. Often the individual spheres will have just a spot of red. Pure red specimens also exist but are quite rare.

That said, this area is the only place in the United States where you’ll find this material. The same area is host to Carnelian, red-colored agates, and jaspers of various types. It’s a good spot to hit if you’re planning on rockhounding in and the rare grape agate nodules are a bonus. 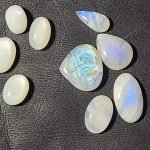 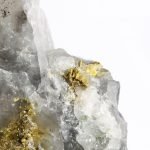