How Is A Geode Formed?

I’ve always been amazed by geodes. I remember the first geode I really was in awe with. I was just a kid, and my good friend Tim had a nice sized geode that was full of beautiful deep purple amethyst crystals. It was awesome.

But how in the world did the earth create such an incredible rock? It wasn’t until years later that I fully understood how geodes formed. And now, in addition to being in awe at the beauty of geodes, now I’m equally amazed at the painstakingly slow process that’s required to form these geological wonders.

What Are Geodes? (A Quick Recap)

Geodes are hollow rocks that oftentimes contain a beautiful collection of crystals and minerals inside the cavity.  And depending on the types minerals that find their way into the geode determines what kind of crystals are formed, such as amethyst, agate and quartz.

Geodes are treasured and sought after all over the world for their beautiful and brilliant crystal contents. Many rock collectors and crystal enthusiasts find a lot of enjoyment out of finding geodes on their own and cracking them open themselves to reveal the hidden treasures. While at the same time, there is an entire group of collectors who are willing to pay significant amounts of money to own certain types of geodes.

You can read more about geode values on my post, What Are Geodes Worth?

If you want to continue learning about geodes and how you can find them yourself…you can read more about them on my main geode article, How To Find Geodes: The Ultimate Guide.

How Geodes Are Formed

So how does an entire collection of different kinds of beautiful crystals end up trapped inside these hollow rocks?

The life of a geode ultimately starts as a small (sometimes large) void in the rock in which it will eventually form inside of. These empty spaces in the rock are typically pockets of air which were formed by lots of different methods.  But the most common way these empty voids in the rock were formed was by volcanic activity.

The Type Of Rock

With that said, however, geodes do not form in just any old type of rock. As a matter of fact, geodes are usually found in a handful of types of rock that are more prone to having these small air pockets inside of them. A couple of the most common types of rock that geodes can be found in are basalts and limestones.

Now It takes more than just a sealed air pocket formation inside of a rock for a geode to be formed. In order for that void to ultimately become a geode, crystals must begin to form inside it. And in order for these crystals to form, it takes minerals…and time.  Lots and lots of time.

Over many years, that moisture will evaporate and completely dry up. What’s left behind are all the mineral solids that were previously dissolved in the water. If you’ve ever evaporated a saltwater mixture, you would have noticed that when all the water is gone, all that’s left is the residue from the salt. It’s this same concept for how geode formation occurs.

Over thousands of years, the cycle of water entering, evaporating and eventually leaving behind all the minerals happens over and over and over again.  Eventually, these minerals begin to build up, grow, and expand inside of the void. As this happens, the crystals inside slowly begin to work their way to the center of the void. Ultimately, the crystals will grow to fill the geode entirely.

All of these crystals that took thousands or millions of years to form are then completely formed and are forever hidden inside the pitch black sealed tomb, until a rockhound like you or I strike it with a hammer and expose nature’s awesome display to daylight.

How Geodes Are Formed (VIDEO) 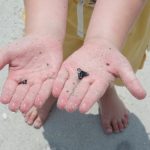