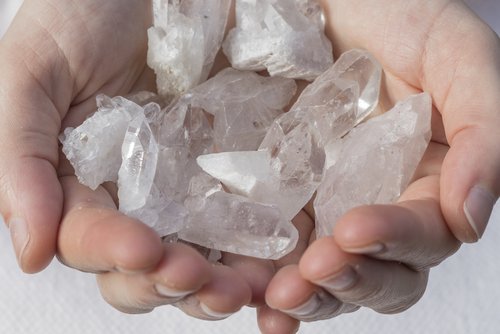 How To Find Quartz Crystals

I’m often asked by readers young and old where they can find quartz crystals in nature. The answer is that you probably already have some right at home! It’s necessary to keep your eyes open as there are many types of quartz, and it doesn’t always look like what you’re looking for, since quartz crystals can take on many different colors and appearances.

The good news is that quartz crystals can be found just about anywhere. But what we’re going to do in this article is provide some tips on what you can look for so you can find lots of beautiful, gemstone quality quartz crystals.

Where To Look For Natural Quartz Crystals

There are several locations near you that are excellent opportunities for finding quartz crystals. Those are:

As you can imagine, since quartz is one of the most common minerals on the planet, you can usually find it just about anywhere, including your own backyard.

When my kids were young, all we would have to do is take a stroll through our gravel driveway and in a matter of minutes my daughters pockets would be full of “pretty rocks”, or quartz crystals.

If you don’t have a gravel driveway, try taking a stroll down the sidewalk. Look for vacant lots or gravel driveways and parking lots. Even doing this you’re bound to find a nice specimen or two.

Roadside cutouts might be one of the best places to look for quartz crystals that are free to everyone. Many times you’ll find that some of these roadside cutouts actually cut right through a quartz vein or other major quartz deposit.

What’s left behind are massive amounts of loose quartz crystals just waiting to be claimed by someone.

Some of the highest quality quartz crystals I’ve found have been in these roadside cutouts and loose debris.

Another excellent place to look for quartz crystals are mine tailings. Mine tailings are essentially the dirt and debris that’s left over from a mining operation.

The rocks, dirt, minerals and other debris need to be removed from the mines and are poured out in piles near the mine. The mines will oftentimes allow the public to scour through these piles of debris.

These tailings are many times rich in various rocks, minerals and gemstones including quartz, especially if the mining operation worked through a quartz vein or other major quartz deposit.

Another easy way to find quartz crystals is to go to a fee-mine or dig-site that is already known for finding quartz crystals. A quick search online should give you some ideas of where these sites are located near your area.

Since quartz is so plentiful in nature and can be found pretty much anywhere, I always recommend rockhounds try hunting for quartz in free areas first. Then use pay to dig if you need to find higher gem quality specimens or larger quantities of quartz.

If all else fails, and you are absolutely determined to get your hands on a new quartz crystal specimen to add to your collection, then visiting a rock and gem shop near you will most certainly have what you’re looking for.

Can’t get out of the house? No problem, rock and gem stores abound in mass quantities on the internet. Just be careful when buying online and make sure you are buying genuine natural crystals and not man made synthetic quartz crystals.

What Are Quartz Crystals

Quartz is a silicon dioxide crystal and is a type of clastic sedimentary rock.

Quartz crystals are actually one of the most abundant minerals on Earth. You can find it in many different colors, including clear, rose, smokey and icy white. Although it’s not technically a rock, because its silicon and oxygen composition make it closer to a mineral.

Most quartz crystals which you find will be clear or white, but some have color – sometimes beautiful colors like purple, pink or red.

These colors are caused by impurities in the quartz structure that can only form at very high temperatures (over 1,000 degrees C) and so they indicate that your crystal came from a very deep-seated source.

Different Types of Quartz Crystals | What Do They Look Like?

Clear quartz crystal is a type of mineral known for crystallizing into amazing shapes and retaining their luster. This clarity and white coloring makes it easy to preserve this type of crystal, not allowing the oils from skin contact to darken or dull its colors. Clear quartz also found in many forms such as: amethyst, rose, cactus, citrine, dendritic.

Amethyst quartz is a purple variety of quartz and owes its violet color to irradiation, impurities of iron and in some cases other transition metals, and the presence of other trace elements, which result in complex crystal lattice substitutions.

Unlike many minerals that can only be seen with electron microscopes or an infrared microscope, amethyst’s unique crystal form makes it possible for individuals to see this semiprecious stone with the naked eye!

The pink color of rose quartz makes this type of quartz crystal a particularly popular gemstone. Rose quartz is one of the most common varieties of crystalline quartz, with massive occurrences found on every continent around the world.

Its standard colors are gentle pastel pinks that range from almost white to an intense vivid mauve, but many specimens have an antique or raspberry tone due to vanadium impurities typically present within the crystal structure itself. Its because of these colors that makes rose quartz a highly sought after gemstone.

Smoky quartz crystal is a brownish gray, translucent variety of quartz that ranges in clarity from almost complete transparency to an almost-opaque brownish-gray or black crystal.

It is a silicon dioxide crystal. The smoky color results from free silicon formed from the silicon dioxide by natural irradiation. Most crystals are found near active volcano sites and were probably formed at temperatures of about 800 degrees C higher than those for clear quartz stones.

Geodes are natural rocks with a hollow, spherical or rounded shape and structure composed of mineral crystals. Most geodes contain clear quartz crystals; however, some may have purple amethyst.

The varieties come in many different colors which can be beautiful too! Geodes look very common minerals when outside the rock but is actually quite interesting on the inside once opened. Quartz crystals or amethyst crystals are often found inside these rocks, but each geode can also house banded jasper, agate or rough-looking calcite or even dolomites and celestites.

Quartz oftentimes will form in clusters called crystal clusters. These clusters of quartz crystals are formed when crystals grow near each other, and their internal structure causes them to have a specific unique shape. If the crystals coat the walls of a cavity, they are called druse. These crystal clusters are highly sought after by collectors and are the ultimate prize for rockhounds hunting quartz. 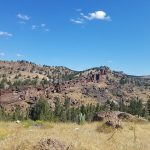 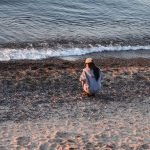