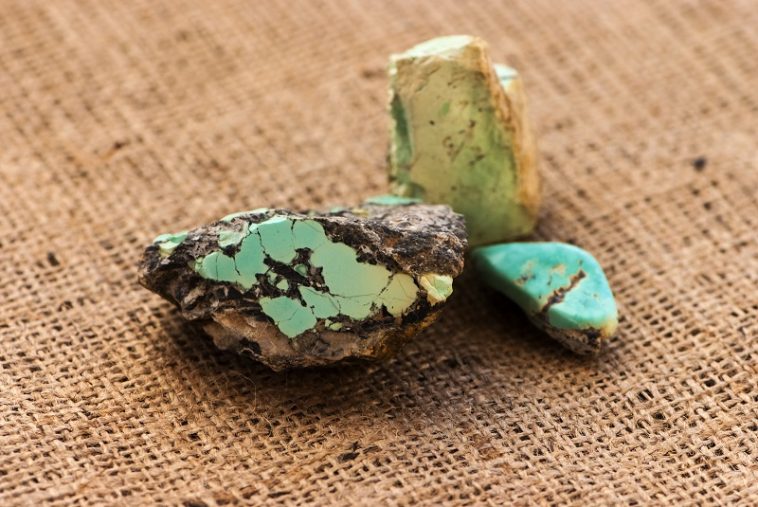 Turquoise is among the most sought after, and expensive, lapidary materials. It’s easy to identify in the field by it’s blue to green coloration. The problem is that with so much value it inevitably brings along fakes, undisclosed treatments, and other issues. The person selling it may not even know!

So, if you’re looking for a rough and ready guide on how to identify raw turquoise you’re in the right place! Let’s start digging.

Appearance alone is never a good way to identify minerals and stones, especially if you’re not the one who dug them up. Instead, it gives you a rough ballpark idea of what the stone may or may not be.

That said, raw turquoise is pretty distinctive. The coloration is the big thing, turquoise seems to run in its own special spectrum from light green to deep blue depending on the locality it was dug up in.

Raw chunks may have a lot of host rock on the exterior, but there’s almost always some indication that the inside is turquoise. You can chip away some of the matrix to check if there’s no indication in the piece you’re working with.

Raw turquoise can often appear almost botryoidal, with irregularly sized, vaguely round sections protruding in between thin layers of other material. That’s not the case with every piece of turquoise, it’s a highly variable material.

In general, you should check for color and possibly the exterior of the nodule before you go any further. Actual nodules with the normal bubbly exterior are a good sign, but howlite forms in a similar manner and is often dyed to resemble turquoise.

It’s kind of a shame since howlite is actually a great material on its own.

I’ll discuss simulants and synthetics below, just be aware many of them can be very close to natural turquoise in appearance. That’s why we need multiple points of reference in order to 100% ID a stone like turquoise.

This also means material that is a very solid color with no zoning or interruptions is most likely not turquoise. This grade of material does exist, but it’s exceptionally rare and usually doesn’t change hands by accident. Due to the decline of natural sources it’s very, very rare to see any sizable chunks of this exceptional material still in a rough form.

Turquoise is… a pain when it comes to hardness testing.

The problem lies in the fact that turquoise ranges from gem-grade, hard crystals to powdery material that scratches readily. On Moh’s scale, turquoise runs from about 5 to 7. Material harder than a 6 is prized, rare, and generally considered “gem quality.”

Most material runs from 5 to 6. Some materials not suitable for cutting before treatment will run a 3 or 4 on the scale. Anything under 3.5 isn’t really suitable for cutting and polishing, it’s simply too soft. If you have this sort of turquoise, you may want to consider stabilization.

In practice, I’ve rarely seen that softness of turquoise available for sale. It’s relatively common when mining and in some places, it will make up the majority of the dug material.

A simple hardness testing kit is something every rockhound should have around. If you don’t have a test kit then a piece of scrap copper should help you distinguish between turquoise and howlite.

For further testing to determine the turquoise’s grade you can use a steel knife. If the knife scratches the stone it’s under 5.5 in hardness, unless you’re using some sort of exotic steel in the blade. Essentially a normal steel knife won’t be able to scratch very high-grade turquoise.

Keep in mind that just because the stone’s hardness is under 4.0 or so, doesn’t mean it’s not turquoise. Stabilized turquoise will usually run from 3.5-to 4.5 on the Moh’s scale depending on the initial hardness.

That said, most of the time the person doing the stabilization will be the cutter, not the miner, so it’s rarer in rough than in cut stones.

Since we’re talking about rough… you’ll notice when it’s cutting. Epoxy has a distinctive smell as it burns due to the cutting and grinding wheels and if you have any experience at all it’s quite noticeable.

Please note that the Zachary Process, which is an electrochemical treatment used to enhance turquoise, will not give off many signs of being stabilized. It does have some tell-tale hints, but the science behind it is a bit outside the scope of testing raw turquoise.

That method is considered “above” stabilized turquoise in terms of grade.

Stabilized turquoise is the most common, with some estimates at 90%+ of the market being stabilized. This is especially true for newly mined material. Stabilization is easy to test for.

Epoxy will burn, so just heat up the end of a pin or nail until it’s red hot and poke the stone. Natural material will have no reaction, but material that contains epoxy will let off a bit of foul-smelling smoke.

Reconstituted turquoise is sometimes sold as stabilized or standard material to the unwary. It’s essentially crushed up turquoise spread throughout a block of epoxy. The difference in feel is immediate, this form of fakery inevitably leads to a stone feeling cheap and plastic in the hand.

If the material is on the softer side of things, then a simple hardness test may not give you a complete picture. Dyed howlite is remarkably similar to turquoise in appearance.

Fortunately, there’s a really simple way to tell if the material has been dyed: just take a paper towel, dip it in acetone, and rub it on the surface of the stone.

If the paper towel turns blue or green, then you have dyed material on your hands. While it’s not 100% unheard of for very low-grade turquoise to be dyed, the result indicates dyed howlite in the majority of cases.

Provenance is important with turquoise, both to the cost and the marketing. This is doubly true for the American turquoise mines, where each mine boasts its own individual varieties of turquoise. Names like Sleeping Beauty and Hidden Buffalo abound.

While these varieties are often quite distinctive, it’s almost impossible to track down the mine with 100% certainty when the stone has changed hand many times.

If you’re looking to determine the provenance of a piece of rough turquoise it’s best to find someone who is a true expert in turquoise in general. A quick search on the internet and looking at pictures isn’t going to cut it.

In general, you can claim a piece is from wherever you’d like, but you should be very confident in your assessment if you plan to sell the piece later.

Putting It All Together

While this is a lot of information, we can condense the tests for you into a simple form.

Grab yourself the following:

Once you’ve gathered up the materials do the following:

If your testing turns out positive you can be about 95% certain of what you have. There are still simulants and synthetics out there that will pass most of these tests, but they usually have a distinct appearance like Gilson turquoise and it’s solid color or spiderwebbed black patterns.

These are just preliminary tests you can run at home. If you have a truly valuable piece of material on your hands then you may want to speak to a jeweler or gemologist. They will have the tools and expertise to let you know what the stone is with 100% certainty.

For most material, however, the above tests will let you know what you’re planning to cut is turquoise instead of a cheap imitation or altered stone. 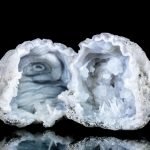 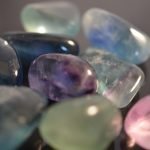