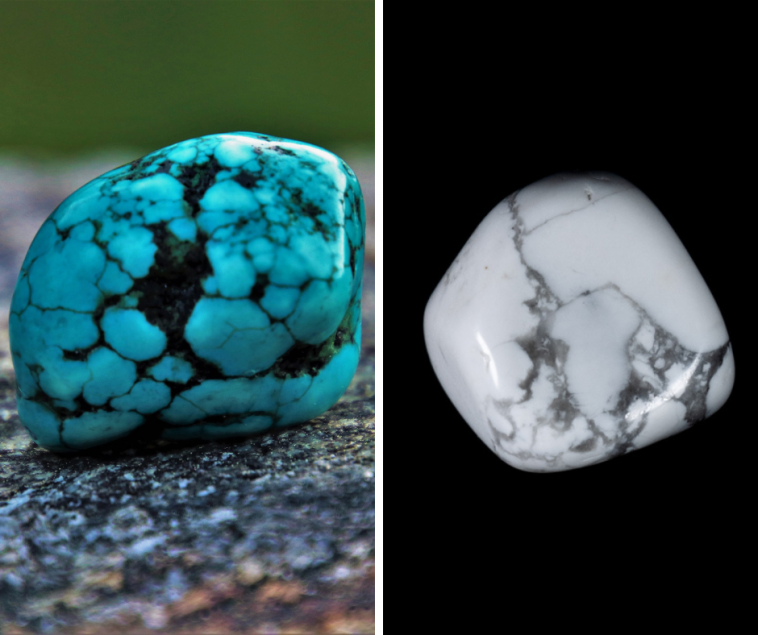 Howlite fits into a weird place in mineral collecting. For many of us it’s considered to be an inferior stone, one which is frequently altered to pass for others. On the other hand, it’s a beautiful stone in its own right and both cabochons and crystals are desirable specimens.

So, ready to learn a bit about howlite? Keep reading, and we’ll teach you everything you need to know about this stone.

Howlite is a calcium borosilicate hydroxide mineral, which is white or brown in color with black veins running throughout the material. It’s found in large nodules, which have a bit of a cauliflower look to them.

Howlite is, perhaps, best known for being used to imitate other gemstones. The veining makes it look similar to many stones with a lot more cash value, such as turquoise and lapis. At least with a bit of dye added.

The stone goes by a variety of misleading names. White Buffalo Turquoise is one of the more common ones and leads down a delightful rabbit hole of people arguing about which not-turquoise stone is the real White Buffalo.

The most common variety sold under that name is actually a magnesite and alumite mass found alongside turquoise in Dry Creek Mine in Nevada. It’s… very similar to howlite by appearance and it’s easy to see how the two could be confused.

On its own, howlite is a relatively soft mineral sitting at a 3.5 on the Moh’s hardness scale. This makes it very workable, and the truth is that the majority of white turquoise deposits are a chalky mass that’s much softer.

Howlite is found in nodules that range from fist-sized to much larger, with the upper end of found nodules appearing to be around 110lbs (50kg). The nodules have a mottled appearance with a discolored matrix, often appearing black or grey.

The better samples are pure white in color, with grey or black veins running through the material. Some samples are brown, but not to be confused with the dyed variety usually sold as brown howlite.

A Bit of Howlite History

Howlite had a heyday in the 1950s-1970s, when the location where the material was collected was open to the public and it could be gathered by the bucketfull with no real effort. It’s unknown how much material was removed from the site but howlite is one of the most common finds in estate sales of folks who had a lapidary interest.

When the area was closed to the public the massive amount of howlite still on the market ended up being dyed just about every shade imaginable as people sought to get rid of it. Today you can sometimes find magnesite sold as howlite.

Howlite has a sour reputation among some collectors. It’s one of the best fakes for turquoise out there and more than one person has ended up being tricked into buying dyed howlite instead of their highly-valued turquoise.

Howlite takes dye very well due to the porous nature of the stone. The dye can seep in and change the color throughout the stone. Add in the veining that resembles that found in turquoise and you have a recipe for fake turquoise that almost writes itself.

Unfortunately, it’s a close enough match that it’s hard to impossible to tell from pictures alone. On the plus side, you can easily distinguish them with a hardness test. Howlite’s 3.5 on the Moh’s scale can be differentiated very easily from the 5-6 that most turquoise varieties have.

Howlite is also commonly seen with a deep blue dye being sold as lapis, which is a bit more obvious but can pass casual inspection. Add red… and it can be sold as coral, which is harder to distinguish with basic tests.

You might notice that all of these are used extensively in Southwestern style jewelry. As a different, and less expensive market than traditional fine jewelry, it’s easier to slip through fakes for the unwary collector.

Dyed howlite is often labeled in odd ways. Spend some extra time reading the description if you’re buying anything labeled as turquoise, red coral, or lapis. Few sellers based in the US are going to risk litigation by not labeling the stone as dyed, but they’ll definitely hide that information deep in the description if they’re less than honest.

Howlite works so well as a fake because of its appearance. Turquoise and a well-done fake in howlite aren’t something you can distinguish with pictures. The problem isn’t as rampant as it used to be, but you should always be on your toes buying turquoise. It’s not just howlite you have to worry about in that case, the high prices of turquoise have attracted a lot of cons to the market.

Some older dyed howlite is put into some impressive neon colors. While a bit gaudy, they’re readily identifiable as dyed and there’s a market for them the same way that heavily dyed chalcedony is commonly sold.

Where Can I Find Howlite?

Howlite was originally found in Nova Scotia, where it was identified by a geologist named Henry How. The name was eventually given to the stone by another geologist to honor the discovery.

Today, however, the vast majority of the stuff comes from Southern California. Specifically, the best place to collect is to explore the area around Tick Canyon, which is a bit Northeast of Santa Clarita on Davenport Road.

How To Get There

To get there, you just need to go northeast on the Sierra Highway from Santa Clarita. You’ll follow it for a few miles before a righthand turn puts you on Davenport Road. Roughly a mile and a half down the road you’ll see piles of tailings on the right-hand side. This is a good place to start looking.

The mine is currently fenced off and closed in, so what you need to do is take a look around the perimeter. The mine there is a borax mine and howlite wasn’t considered to have any economic value so it was unceremoniously dumped in with the mine tailings. You can even find it used as base rock in concrete in the area.

Seriously, until the short craze for howlite started it was considered a complete waste product. That means hundreds of tons of it were dragged from the earth and thrown to the side for rockhounds to later find.

There are a few areas where the tailings were pushed out of the immediate, closed-off area. If you can find one, these piles of discarded stone are rich with howlite. Filling a five-gallon bucket is an easy task at that point.

A Word of Caution

If you do head out there, be cautious and don’t give in to the temptation to get on the fenced property. You can find more than enough for a season of cutting without having to break the law or risk the dangers immediately around the borax mine.

In the US, you can also find howlite in the Muddy Mountains Mining District in Nevada. It can be reached by taking the 15 northeast of Las Vegas for about 18 miles. You’ll be able to take the turn off to Valley of Fire Road from there, the Muddy Mountains will appear on your right.

This location doesn’t have as much data, but people have found samples there. For that reason, I’d recommend stopping off at Tick Canyon if you’re looking to collect your own specimens. Mindat has a few other locales listed in SoCal, but it’s incredibly easy to collect from the borax mine tailings at Tick Canyon and the location is public knowledge.

From recent reports, the only things you really need to collect howlite in the area is your hands, a bucket, and some water for the desert heat.

If you’re in a location that’s suspected to have howlite, you’ll need ot know how to identify it in the field. It’s not quite as easy to spot when it’s not already cut.

The biggest thing to look for is a dark matrix with bits of white poking out. Some howlite chunks have been broken recently (ie: within the last fifty years) and can be identified by the bright white interior as well.

Howlite forms as a conglomerate mass from individual round masses of crystals. Cauliflower is a good description for those who’ve never seen a raw bit before. Specimens without a broken side can look great when cleaned up.

Essentially, you’re just looking for black/brown and white stones. Anything that’s broken should have a porcelain-like “feel” where the stone is peeking through, rather than being granular.

Howlite is an easy stone to find and field-identify for the most part. You just need to be in the right location when you’re looking for it! 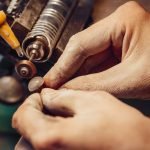 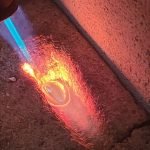