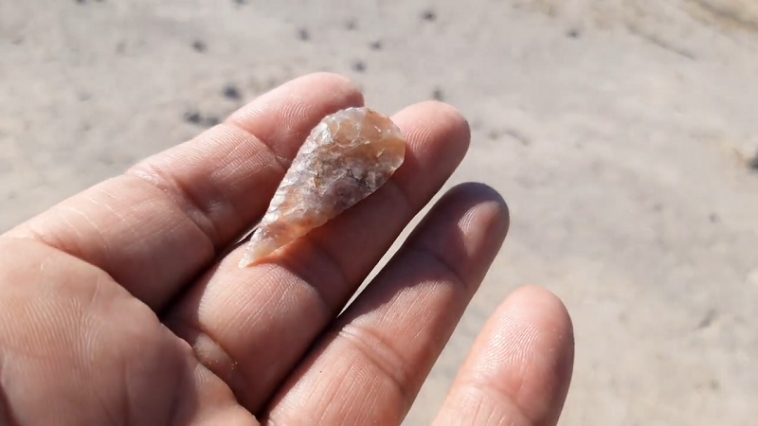 For at least 12,000 years, Native Americans in Arizona have utilized hand made arrowheads for both hunting and warfare. For most of this period, large, heavy points that topped darts (long, compound spears) were used.

The employment of the atlatl (throwing staff) made darts especially deadly, giving a faster projectile and therefore a longer range and more hitting power than spears launched by hand.

The bow and arrow eventually replaced darts in the Tucson Basin about AD 500. Arrows tipped with stone arrowheads were considerably smaller and lighter than their dart counterparts. And the power exerted by the bow gave the projectiles extremely high velocities, resulting in a far larger effective range than atlatl-thrown darts.

The combination of high velocity and the extremely tiny cross-sectional area of the small, thin stone arrow tips gave the hunter or warrior with tremendous penetrative force. A quiver could hold a large number of arrows, and a competent archer might fire numerous arrows at their target in a short amount of time.

It became clear very quickly that the arrowhead was the weapon or tool of choice.

Read More: How To Find Arrowheads In The Woods

Are There Arrowheads in Arizona?

As you can imagine, over 12,000 years of hunting and fighting has resulted in countless numbers of these arrowheads and other projectile points being strewn across the landscape.

How Many Arrowheads Are In Arizona?

Just think about this for a moment:

Consider how many arrowheads and spear points one individual might have produced in his lifetime if the average life expectancy of ancient Native Americans was 40-45 years. Especially when they started creating projectile points as children.

Furthermore, keep in mind that these arrowheads were essential to daily life. In addition to collecting different cultivated crops, animals were hunted for consumption, which would have necessitated the use of a huge number of arrowheads. They didn’t eat unless they hunted and gathered.

Now take that one guy and the number of arrowheads he would have produced and used throughout his lifetime by the tens of thousands of Native Americans who lived in ancient Arizona. Multiply that by the number of generations that lived in and moved to Arizona over the course of those thousands of years. The amount of arrowheads in Arizona lying on or under the ground right now must be countless.

How old are arrowheads in Arizona?

With that said, we can assume that some of the arrowheads, projectile points and other artifacts that we find in Arizona could be 16,000 years old!

Where Is The Best Place To Find Indian Arrowheads In Arizona?

There is no shortage of places in Arizona to look for arrowheads. You can walk out into the desert just about anywhere and start looking.

The question is, however, is that what you should do? Probably not. Here’s why.

Instead of simply walking out into the desert, there are a few things you can do to help increase your odds of finding arrowheads.

Some of the best places to find arrowheads in Arizona are:

Is it legal to pick up arrowheads in Arizona?

Keep in mind that this is merely my interpretation of the law, and is for informational purposes only. Please make sure you know the law in your own area before ever picking up an arrowhead!

With that said, I know that many kids who grew up in and around rural areas undoubtedly have an arrowhead they came across.  Possession of such items is typically not unlawful as long as they were obtained in a lawful manner.

A good rule of thumb is, if the arrowhead is discovered on private property, and you have permission to be hunting arrowheads on that property, then it is usually lawful to pick up arrowheads in Arizona.

But what about Arizona state land? Is it legal to collect arrowheads in these areas? According to ARS 41-841, it appears that surface collecting of arrowheads in Arizona is permitted. However, this is only my interpretation and should not be considered as legal advice.

I am copying the Arizona Revised Statute (ARS 41-841) below for you to review and make your own decision:

B. On lands owned or controlled by this state or any agency of this state a person shall not knowingly collect any archaeological specimen or vertebrate paleontological specimen without obtaining a permit authorizing the activity as provided under § 41-842 .  For the purpose of this subsection, “archaeological specimen” means any item resulting from past human life or activities which is at least one hundred years old including petroglyphs, pictographs, paintings, pottery, tools, ornaments, jewelry, textiles, ceremonial objects, weapons, armaments, vessels, ships, vehicles and human skeletal remains.  Archaeological specimen does not include arrowheads, coins or bottles. 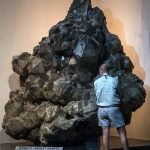