Play of color, or iridescence, is one of the most amazing qualities that minerals pick up. Gemstones, in particular, can be amazing when the light hits and the fire begins. There are quite a few of them out there as well, especially if you’re willing to bend the definition of gemstone a bit.

So, let’s get to it with our list of amazing iridescent gemstones!

Labradorite sees a lot of popularity these days. It’s entirely for the internal play of color that occurs within the stone. Labradorite has strange crystal intersections that scatter light and create an amazing optical effect.

Labradorite, and its clear counterpart Rainbow Moonstone, is usually blue to gold in color when the effect is present. There are also purple and vanishingly rare red specimens available, although the majority of red material on the market is counterfeit in one way or another.

Rainbow Moonstone is distinct from regular Moonstone, which is generally an opaque stone with an internal glow instead of having a true internal play of color in the light. Rainbow Moonstone is, essentially, water clear labradorite and not a true moonstone despite both being feldspar minerals.

Labradorite is available as both small cabochons and massive carved pieces. The stone itself occurs in large masses and it’s remained affordable despite the high-end nature of its optical effect.

Labradorite’s specific effect is called labradorescence, but it’s a definite color play effect. The internal glow, combined with masterful cutting and a good specimen, can create effects that seem supernatural and that’s why it tops our list.

Precious opal is known for its iridescent play of color, perhaps more than any other stone. The internal world of precious opal can be incredible, filled with a variety of twinkling dots, vivid patterns, or even just a splash of constantly changing color across the entire piece of stone.

Precious opal ranges from very expensive, in the case of high-grade Australian material, to relatively affordable depending on the locality and exact piece. You can’t really give a carat-for-carat price for these stones, each is unique in many ways.

Opal’s play of color is caused by its amorphous internal structure. Unlike other types of silica, which are crystallized to some degree, its comprised of tiny spheres that scatter light as it passes through them. This creates an effect that causes the “fire” in opal to change drastically depending on the viewing angle.

Opal has some serious staying power in the jewelry world, despite many problems the stone can bring with it. It’s not hard to figure out why it’s so highly sought after if you’ve seen a few nice pieces in person.

Ammolite is the exterior shell of fossils known as ammonites. The stone itself occurs in a very thin layer. It’s comprised only of the shell material of ammonites and it’s a relative latecomer to the gem world. The majority of readily available material for hand digging isn’t very usable as jewelry.

One company, Korite, supplies 90% of the world’s ammolite. The material is mined through open pit excavation. They just turn up a bunch of earth and put it through screens to find the material, the good stuff is often very deep in the ground and isn’t mined very often.

Ammolite is known for its intense, playful colors that shift with the light. The material itself is almost always thin, and most pieces end up with a doublet backing. This material is highly sought after by jewelers and collectors alike, it is a unique display.

Ammolite is one of the world’s few biogenic gemstones, being comprised of the same aragonite as the shells were originally made of. While rare, and requiring modern methods to work, ammolite is fast becoming a staple in North American jewelry, and it is widely available for those who can afford the expense.

Fire Agate is one of the rarest forms of agate around, with gem-quality material only emerging in the American Southwest and Northern Mexico. The iridescent effect the stone is famous for is caused by alternating layers of iron oxides and silica, which create a mass of bubble-like inclusions that show a play of colors similar to opal.

The internal botryoidal formation shouldn’t be overlooked. In this case, pictures only do so much, as a well-cut fire agate will often have only fractions of a millimeter of clear chalcedony remaining over the highest points. These internal structures are very delicate, and it’s easy to cut through them as they’re not a solid mass.

They’re thought to have formed from repeated breaking and re-healing with silica and iron-infused waters far underground. The formation occurs in broken chalcedony, creating the incredible effect seen on fire agate’s surface.

Rare, expensive, and absolutely breathtaking are all good ways to describe fire agate. Everyone who has a serious interest in chalcedony will enjoy this stone, and if you can afford it they make an incredible part of a collection.

Pearl and abalone are both technically shells. Both of them, especially pearls, are considered precious gemstones in many circles. The primary reason? The subtle play of color that comes across the surface of the mother of pearl that they’re made of.

The most famous nacre is undoubtedly the pearl, but high-end jewelry often features abalone shells as inlay or other decorative elements. Their method of formation is, of course, very different.

Pearls are the result of a foreign body lodging in certain varieties of mollusk, most famously in oysters. They’re also cultured using small plastic “seeds” in modern times, making them more accessible when it comes to reasonable sizes. Pearls come in a wide variety of colors, depending on species and locality.

Abalone, on the other hand, creates thick, hard shells of the same substance. The outer layer of the shell is often quite thin and can be easily ground or filed off the mother of pearl core. This is then cut and polished for use as pendants or inlay material. You can even find sizable shells which are highly polished with just the outer layer removed.

Regardless of their origin, both are highly sought after. Even rockhounds get in on the action sometimes, especially when they live near an area that hosts pearl-bearing or abalone species. They’re a simple reminder that the definition of stone used to be much more flexible than we currently consider it.

No list of iridescent gemstones is complete without addressing the wide variety of coated gemstones out there. Quite often these quartz or topaz crystals are among a newbie’s first few samples, and while they’re man-created there’s no denying their beauty.

The majority of these are made by vapor deposition of extremely thin layers of metallic compounds on the exterior of crystals. Gold and titanium are common examples, with each having its own special coloration.

These coatings can easily be scratched off in the majority of cases, and they don’t penetrate more than the surface of the stone. The process is a bit advanced to do at home, but fortunately, it doesn’t add much cost if you’re just looking for an iridescent crystal.

Topaz is sometimes coated after being faceted, adding an iridescent sparkle as a gemstone in various pieces of jewelry.

They may not compare to opals and moonstones, but these gemstones have earned their place in the trade. It’s great for newbies to be able to find something that looks especially exotic, and more than one rockhound’s journey has been kicked off just by wanting to know more about these sparkling, synthetic beauties. 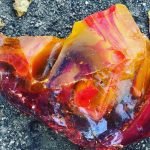 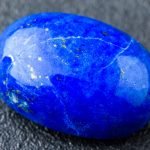