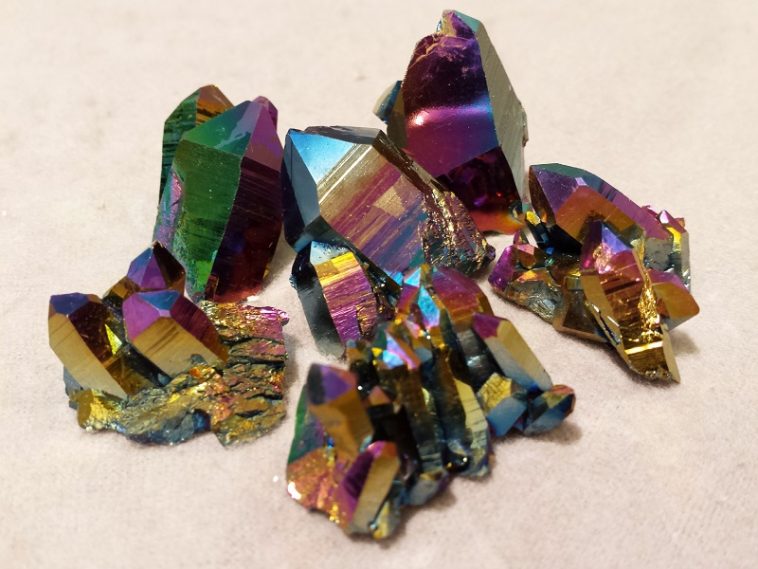 Aura Quartz. Mystic Quartz. Rainbow Quartz. There’s a variety of different names for it, but it’s all the same stuff. Quartz with an iridescent sheen on the surface, often purple dominant with flashes of gold.

But is Rainbow Quartz real? If not, how is it made? Let’s dig into the heart of the matter!

Rainbow or Aura Quartz is treated natural quartz. The quartz crystals that become these flashy specimens are just normal points underneath the surface. The alteration isn’t minor, it requires a lot of technology and some exotic materials.

I should note here that there is a variety of quartz sometimes called Rainbow Quartz that is natural. In this chase, there is a prismatic effect that comes through the crystalline point. You can see an internal rainbow similar to iris agate on these specimens.

That said, it’s most frequently used to describe multi-colored quartz points. These points are coated with metals through a special process. Coatings can range from gold to titanium, and some metals produce different colorations.

Aura Quartz specimens range from a single point to hand-sized clusters of crystals. It’s easy to see why they’ve remained available despite it being common knowledge they’re “fake.” They’re one of the few altered stones that seem to be mostly accepted even by those fascinated with natural specimens most of the time.

It’s hard to say they’re not real, but the correct answer is that Mystic/Aura/Rainbow Quartz is all heavily altered natural quartz crystals.

How is Rainbow Quartz Made?

The process used to create any variety of coated quartz is the same. The process is called Chemical Vapor Deposition(CVD) and requires the use of a vacuum chamber, high heat, and a specialized way to heat the metal.

CVD is a high-tech process, you’re not going to whip up a batch of Mystic Quartz at home. I took a quick look at AliBaba to check prices and you’re looking at five figures for a sketchy machine. You’d be better off studying the process and setting it up yourself, and it’s still going to cost a few thousand dollars at a minimum.

The specimens to be coated are placed inside a vacuum chamber. The chamber is then pulled down to as close to a true vacuum as possible. Mechanical pumps often can’t bring the pressure down enough for this process, but they can produce enough vacuum for sputter deposition.

Often this requires the use of both a primary pump and a backup pump that’s meant only to take down the remnants of air in the vacuum-charged chamber.

The specimens placed inside have to be very carefully cleaned. Any organic matter remaining on the crystals will mess up the coating, and the coating is very thin after it’s been laid down. 2 microns (.002mm) is about as thick as it gets.

The metal is then evaporated in one of two ways.

The first is to use resistive heating. The machine has a resistant coil, usually tungsten, that heats up rapidly as current is introduced. Metals are attached to the coil, by wrapping wire around the coil or another method, and will begin to boil in the vacuum.

The other method uses a magnetron to generate massive amounts of inductive heating. This can cause the metal to sublimate, or transfer directly from being a solid into a gas.

The atoms, thus liberated, have enough energy from the heat to travel in a fairly straight line and deposit on the surface of the crystal. The process can be controlled very closely, creating exactly the effect a skilled operator wants.

It’s complicated, but the short answer is that boiled metal in a vacuum chamber deposits on the surface in a very thin layer, creating interesting optical effects.

These effects are altered by the composition of the coating, and the way colors emerge isn’t exactly intuitive.

What Types of Coated Quartz Are There?

It’s hard to find a definitive listing of the metals used to create the various varieties of quartz sold under names such as aura, mystic, and rainbow. Between the tech and niche use the industry doesn’t exactly have available information just lying around in a handy form.

I’ve been able to track down some information regardless, and you can use it to draw your own further conclusions about other coated crystals.

Specimens sold as “mystic” or “rainbow” are usually coated with titanium. It creates a shimmering rainbow effect over the surface of the stone.

Gold produces a light blue tone on the surface of the quartz. It’s usually sold as “Aqua Aura Quartz” by crystal dealers. Add a little bit of platinum to the god coating and you end up with a purple and light blue shimmering surface that’s usually called “Angel Aura Quartz.”

Other named varieties include “Tanzan Aura Quartz” which is coated with the exotic metal indium to produce a deep blue tone that resembles tanzanite.

Other records show that lead produces a green quartz specimen, while a chromium coating shows up as red. Bismuth coated specimens actually look quite similar to citrine once applied.

Remember that these coatings are only a few microns deep at best, so you have to be careful if using them for jewelry rather than a simple display.

A Note About Topaz

One odd thing that I’d note for the would-be gemologist: topaz is another frequently coated crystal and the same color effects don’t emerge in most cases. For instance, titanium applies a red color to topaz often called “Mystic Fire Topaz.”

The end result? A smorgasbord of colors and shimmer that can be opened up… as long as there’s access to a machine that can complete the CVD process. 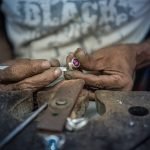