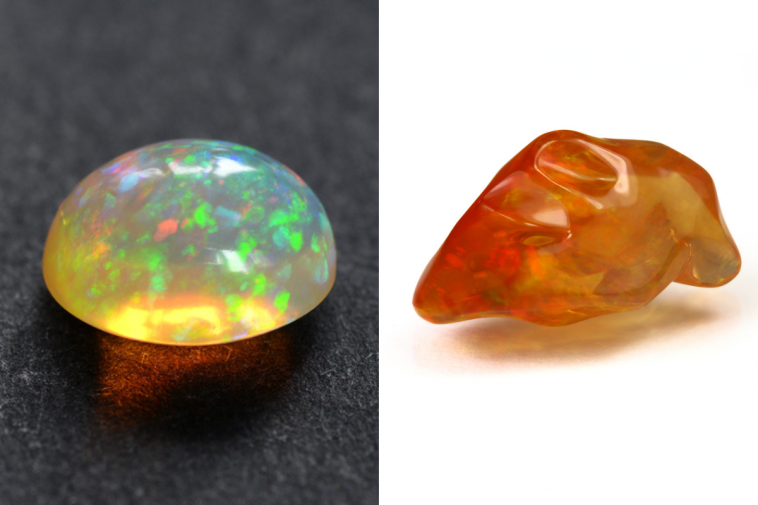 There are so many different types of opal out there. With such a bewildering cascade of names, it can be hard to discern what people mean. Jelly opal is one of the informal names that you’ll occasionally come across if you collect these excellent stones. It can also mean a few different things depending on the person you ask.

So, let’s take a look into the term, what the stones are, and where to find them. It’s time for a bit of education, starting with the answer to your question, just what is a jelly opal?

Jelly opal is used in two ways to describe different types of opal.

Like all other opals, jelly opals are an amorphous form of silica that is comprised of tiny spheres pushed together. When these spheres are in the right configuration we end up with the play of color that defines precious opal from the more common forms of the stone.

Opals have a considerable amount of water in them compared to most stones. It’s usually trapped in the lattice as molecular water.

Jelly opal can refer to fire opal without a play of color or to hydrophane opal with a gel-like appearance. The latter is a relatively new use of the term, and it’s mostly associated with the beautiful high-transparency hydrophane opal that comes out of Ethiopia.

We’ll be focusing on the first definition, as the latter is more of a descriptor. I’ve even seen Australian boulder opal labeled as jelly opal in recent days. As a general rule, however, if you see an opal labeled as a “jelly opal” it’s likely to be hydrophane. While fragile, these specimens are interesting since the colors seem to “float” on the interior of the opal instead of flashing on the surface.

Fire opal is an orange opal variation found in only a few places. It generally lacks play of color, and those specimens which possess it are very rare and valuable. The coloration and natural surface of the opal have a jelly-like appearance.

Fire opal is unique in that it has strong color while remaining transparent. Most transparent opal is clear or has a blueish tint to it, and the vast majority of non-precious opal is also opaque. This has given them a unique use, especially since there are few affordable orange gemstones available to jewelers.

Fire opals are often cut into faceted stones rather than cabochons.

Where Are Jelly Opals Found?

Mexican Fire Opal is found in only a few places.

The bulk of this gemstone comes out of Mexico. It’s mined in several states commercially and the material from here dominates the market. It’s most often seen labeled as Mexican Fire Opal or Mexican Jelly Opal depending on the retailer.

These stones range from light orange to deep red in body color, depending on the individual stone and the locality where it was found.

They can be found in the United States as well. This material comes from Opal Butte in Oregon and is almost identical to the Mexican material. There’s a lot of common and precious opal in this area as well. The main mine is on private property, unfortunately, which makes access hard to achieve.

For a “regular” rockhound, your best bet is to pay attention to the Juniper Ridge Opal Mine. Their Facebook page will post times and dates when they allow rockhounds to dig for a fee. This area has some of the best fire opals in Oregon, often with a larger size than those found in other places. Crystals up to 4” long have been pulled from the Earth here.

Since the material is precious access is often hard to achieve. In some cases, you may be able to find material in the same area without accessing the actual mines, but it’s a long shot and I’d only attempt it if you’re already doing something else in the area such as hiking or camping.

How Do Jelly Opals Form?

All opals form in roughly the same way, but the difference in the end result can be spectacular.

Generally, you’re looking at what happens when water slowly seeps into silica-rich magma. This traps water particles and causes the opal to form rather quickly. Opals that formed very quickly generally don’t have play-of-color, it takes time for the lattice of amorphous silica to settle into the proper formation for opal’s most famous property to emerge.

Most fire opal has formed quickly, which is why it has such a small chance of displaying internal fire.

The reddish color appears to come from the inclusion of iron oxide into the odd lattice that makes up the opal. Essentially, it’s rust that colors these stones and makes them display such a desirable coloration.

Opal is actually not a mineral, although we often refer to it as such. For something to be considered a true mineral, it has to have an orderly internal structure. In other words, it has to have some way to crystallize.

Thus, jelly opal is actually a mineraloid like obsidian.

This seems to happen with some chemical compounds when they form quickly. Keep in mind we’re still talking about “quickly” on a geological time scale. Hundreds to thousands of years is nothing compared to the age of our planet.

The formation of these opals runs across Mexico, where large and labyrinthine mines have been carved into the landscape. These often resemble canyons, and the walls in some places are as high as 60 feet.

The formation of fire opal is a lucky coincidence, but it’s one that opal lovers find easy to take advantage of. 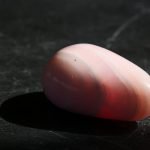 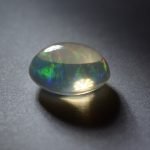