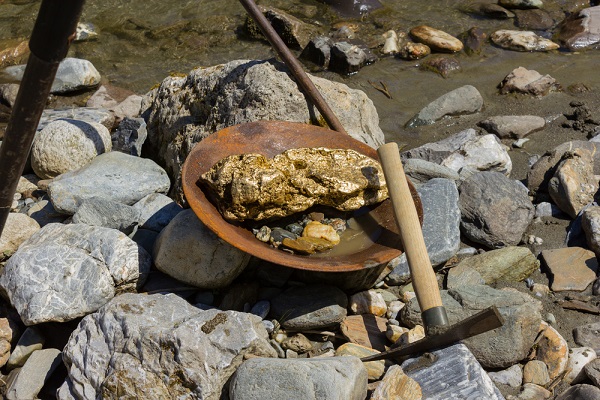 The Largest Gold Nugget Ever Found In Oregon: A Story of Riches to Poverty

Oregon is known for producing some seriously large gold nuggets. Some weighing in at well over 10 pounds each! Could you imagine pulling something that large out of a river? Something that size would be worth around $270,000! What would you do with it? Would you cash it in? I’m guessing most likely that’s what most of us reading this post would do.

But what if you pulled out a gold nugget that weighed 17 pounds? Something that size would be worth almost half a million dollars! I can think of a lot of things I would do with that kind of cash. But drinking myself into poverty is definitely not one of them.

Well, that’s exactly what happened to Mattie Collins, the gold prospector who discovered the largest gold nugget found in Oregon. In 1859 Collins found this massive chunk of gold in North Fork of Althouse Creek near the Rogue River in southern Oregon.

In today’s money and at today’s gold prices, a gold nugget that size would be worth just under $500,000. So what exactly did Mattie Collins do with the largest, most valuable gold nugget ever found in the state of Oregon? Surely he used it as a springboard to finance bigger and greater business opportunities. And surely he used the money to buid multi-generational wealth that can still be seen today.

Unfortunately, no. This isn’t the case at all. As a matter of fact, according to Oregon gold mining historian Kerby Jackson, what Mattie Collins ended up doing was cashing in his gold nugget for $3500 which he then used to drink himself back into poverty.

Of course, the story doesn’t end here. As you can imagine, once word got out about the find, that area of the river was prospected very hard. Then again, in the 1980’s, it made headlines again as one prospector pulled out 130 ounces of gold in just two weeks.

And even though the area has been thoroughly picked through over the years, even to this day, decent sized gold nuggets are still being found.

What About The Armstrong Gold Nugget?

Even though the Armstrong gold nugget is a massive chunk of gold, it only weighs in at 80.4 Troy ounces, or 5.5 lbs. Yes, quite a bit smaller than the Collins gold nugget.

However, the reason the Armstrong gold nugget receives so much notoriety is because is still exists today and can be viewed by the public. Whereas the Collins gold nugget was smelted down just about as soon as it was discovered.

It’s a shame that the Collins nugget is gone forever. It would have absolutely dwarfed the Armstrong nugget in comparison. That’s not to say the Armstrong gold nugget still isn’t something that’s amazing to see in person. Because it is!

If you’d like to see it for yourself, it’s on display at the US Bank in Baker City, OR.