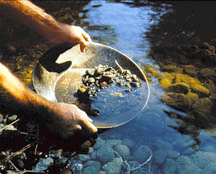 To find the largest gold nugget found in Wyoming, I really had to do some digging to find a good answer.

The issue that I keep coming across is that many of the gold nuggets that have been found were cashed in and smelted before any record of them could ever be made.

So what we’re left with are a couple different recorded gold nuggets that were found in the state of Wyoming that would definitely put a smile on the face of any gold prospector.

According to The Gem Hunter, the largest gold nugget found in Wyoming may have been a 24 ounce nugget pulled out of Rock Creek in the South Pass greenstone belt.

The Gem Hunter also mentions that prior to 1905, a boulder was found which contained gold. Although it’s not a gold nugget, it’s still worth mentioning, because the boulder was reported to contain nearly 40 lbs of gold!

Although there’s not a lot of information recorded on large gold nuggets found in Wyoming, there have definitely been many walnut sized nuggets found in recent times, bringing hope to all the prospectors that continue to sift, pan and dredge for gold.

Where To Find Gold In Wyoming

Gold has been discovered in every mountain range in Wyoming. So if you’re looking for a couple good places to prospect for gold in Wyoming, you can head just about anywhere. But here are a few good places you can check out.