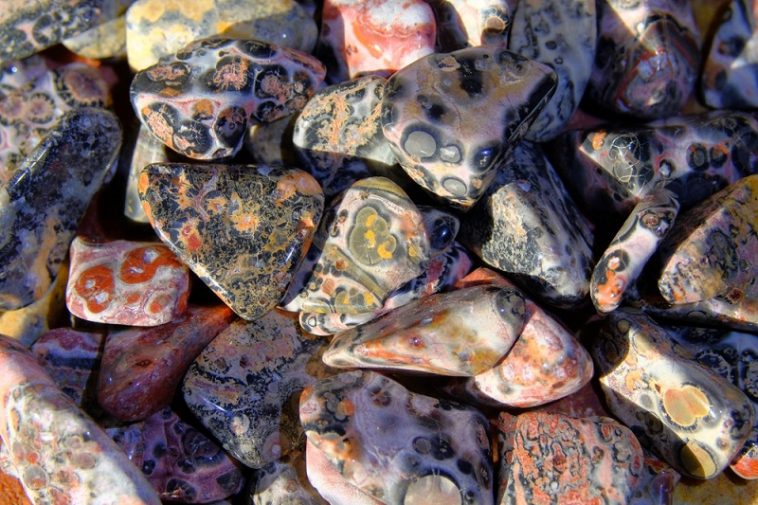 There are an innumerable variety of different jaspers out there, but Leopard Jasper remains a favorite. Its unique coloration patterns and ability to take a great polish make it a favorite for collectors and more than one piece has found its way into jewelry made to show off its spots.

But what is it and where is it from? Read on, as I take you on a deeper look.

What is Leopard Jasper?

These stones generally have a lighter-colored background, with “spots” that are outlined in black. Its patterns are similar to other jasper-type stones, notably Ocean Jasper and Orbicular Jasper. The latter is very close to Oolitic Jasper, but they have a different proposed formation type.

We’ll discuss this in a moment, but on a technical basis, Leopard Jasper is actually silicified rhyolite. The actual difference for a collector or lapidary artist between these variety of stones is non-existent.

The stone itself is pretty common in the trade. It’s pretty, takes a high polish, and it occurs in large formations that allow it to be used for carvings in addition to the normal jeweler’s use. It’s one of the stones I’ve frequently found in bags of mixed polished stones for… over 20 years now.

The tiny spots on the exterior of a polished stone are actually the remnants of an internal crystal structure. Think Grape Agate contained within a stone. The spheres are comprised of an initial crystal seed which then shows radial growth, making them appear as spots when the stone is cut.

Leopard Jasper varies greatly in colors and spheres. If you look at a picture of a group of tumbles you’ll quickly note the different colors and even arrangement of the spheroid crystals and background.

Most Leopard Jasper comes out of Central and South America, although some come from Africa as well. The majority of the material on the market is Mexican in origin.

Unlike Ocean Jasper, Leopard Jasper isn’t a registered trademark. It’s just the common name for a certain “look” of Jasper. Fortunately, it’s a relatively common Jasper globally so it remains modest in price.

In other words: Leopard Jasper is a trade name for a silicified rhyolite variety. It’s spotted, cryptocrystalline silica that takes a high polish and happens to be called Leopard Jasper. There is no fixed definition or locale.

Where is Leopard Jasper Found?

The majority of Leopard Jasper seems to come from Mexico and Brazil. Deposits have also been found in Africa,

The most common source is Agua Caliente in the Chihuahua region of Mexico. The material that comes from this area is essentially the “gold standard” of Leopard Jasper. In other words, Leopard Jasper found in other locales will be compared to the material from Aquas Calientes.

The material from this region does have a striking resemblance to Leopard patterns. The spots are outlined in black, with a yellow-brown base tone and brown in the center of the spots. The name has spread a bit, and I’ve seen Orbicular Jasper that is primarily red also referred to as Leopard Jasper.

Unfortunately, there’s no real presence of the material in the United States and there don’t appear to be any public areas for digging it up.

There’s a lot of argument surrounding the various jasper and rhyolite qualities in certain rockhound circles.

Here’s the skinny of it: rhyolite is an intrusive igneous stone and among the most common in the world. It’s similar to granite in composition, hard and taking a great polish.

Rhyolite is a silica-heavy mineral, often colored red by iron contamination. It’s a common feature in volcanic eruptions, essentially made up of the same minerals as obsidian. The difference is in cooling: rhyolite cools more slowly which allows for crystal formation to begin as opposed to the amorphous glass of obsidian.

Jasper, on the other hand, is… an opaque aggregate of chalcedony and other crystal phases of silica. Pinning down “jasper” gets painful in a hurry once we move out of geology, however, as some of the most common varieties of jasper could be considered other stones.

Rhyolite’s main difference lies in the fact that a good bit of the material is feldspar. Because of that, it’s often softer than jaspers at a 6 instead of a 7 on the Moh’s scale.

Rhyolite can end up with a higher silica content over time as the beds get altered due to geological processes. Once infused with silica, the differences between the mineral’s properties become extremely minor.

Once silicified, rhyolite behaves under the saw and grinding wheel identically to a jasper. It polishes like a jasper. It’s useful for carvings, cabochons, and just polished display pieces in the same manner.

So if we get technical, Leopard Skin Jasper is silicified rhyolite with orbicular patterns. This is mainly of interest to those studying the formation of the stones, rather than working the stones or collecting them.

Rhyolite is pretty important when it comes to rocks coming out of Mexico. The stone itself works well for building things, often cut into blocks, and it can contain a wide variety of other minerals.

Perhaps the most famous of these is the Canterra Opals which are often grouped in with other Mexican Fire Opals. Here the rhyolite is often cut around the opals, keeping them in the matrix to create an attractive display.

Yes, Leopard Jasper is a form of rhyolite. But, so are Rainforest Jasper, Ocean Jasper, and many of the other Orbicular Jaspers that people accept without question. Jasper is a far-reaching term, and one that’s gone far beyond its original use to refer to gemmy, spotted stones.

For most of us, this is more of a bit of trivia than it is consequential. And it’s certainly not going to hurt enjoying the stone! 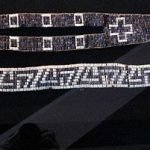 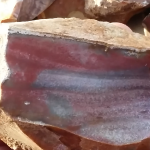