Malachite and moldavite are two great stones for collectors, but the similar name and color can lead to some confusion. Fortunately, it’s easy to tell the two apart as long as you know what you’re looking at.

Let’s get into it, and I’ll break down the differences between malachite versus moldavite and even give you some information on identifying fakes of both!

Malachite is a green, banded, copper-bearing stone. The rich green has made it a perennial favorite among those who collect stones, and it’s still used as a low-priority ore of copper in some areas.

Malachite is also easily worked, making it a longstanding lapidary favorite. Prices for exceptional cabochons can be quite high, and there’s enough of a market for counterfeits to be present.

Malachite runs a 3-4 on the Moh’s scale, depending on the locality and individual formation. It comes in quite a few different forms, including an attractive botryoidal form that creates clusters of round stone.

Azurite is often closely associated with malachite. The specimens where the two combine are highly sought after.

The important thing to remember is that malachite is an opaque, banded, green stone that’s a bit on the softer side.

Moldavite isn’t quite a rock or mineral as we commonly understand them. Instead, moldavite is a glass that was produced during the impact of a crater in Czechoslovakia. This kind of formation is called a tektite.

Moldavite is of terrestrial origin but formed during an impact. The material flung outwards is sand that reached a critical temperature, and it’s this “flinging” that moldavite owes its unique shape.

Moldavite is invariably green, ranging from deep olive to a lighter blue-green. Unfortunately, moldavite is also a glass, which makes it easy to fake for the high prices it commands. Many of the usual “tells” like internal bubbles are present even in natural samples, making fakes a source of constant frustration.

Still, the stone has gained a lot of popularity in recent years. It can be identified easily: it forms in irregular chunks, often with a distinctly thinner end.

Moldavite has little in common with most other stones, apart from the superficiality of being a hard, natural material. This interesting “stone” is available, and moldavite is unlikely to be confused with anything else.

Both are technically stones, and both are easily faked. There isn’t a whole lot more to be had in common with these two, confusing them is more likely a matter of a misremembered name than a bad identification.

With that in mind, even the fakes are made in totally different ways and require different methods to identify.

How Do I Tell Malachite and Moldavite Apart?

It’s pretty easy overall: malachite is a banded, smooth stone and moldavite is irregularly shaped chunks of glass with a unique surface texture.

For most people, identifying which samples of either are fake is going to be a bigger concern.

Malachite has the dubious distinction of being highly sought after and easy to fake visually. Since the price is high, you can naturally expect to run into counterfeits on the market. That said, most of the fakes are terrible in quality and will only catch up with a novice.

There are two main types of fakes: resin fabrications and “reconstituted” malachite.

If you already have the sample you can easily test: heat up a pin using a stove or lighter and a pair of pliers. Press the pin into a portion of the stone (preferably somewhere kind of out of sight. If the hot pin goes into the stone, creates a puff of smoke, creates a smell, or otherwise reacts?

Your sample is fake. This test will catch both types of fakes without any serious issues.

Being able to tell from just pictures takes a little more finesse. As a general rule, fake malachite will have very clean patterns and bright colors. Natural malachite is often dark with some fuzziness between the boundaries of different color layers.

The name recognition and easily identifiable coloration make it a gold mine for scammers targeting newbies, but most collectors eye malachite carefully enough to avoid bad purchases.

Moldavite is a glass. More specifically, it’s a silica-based glass… just like all of the glass we use in our daily lives. It’s also worth a lot more than most people think, making fakes a lucrative market.

And there are a lot more fakes than it appears at first glance. It’s hard to overstate the presence of fake moldavite on the market. It’s at the point where I have serious doubts most collectors have actually come in contact with a single piece of the “real deal.”

Read More: Real vs Fake Moldavite: How To Tell The Difference

If a moldavite chunk is much larger than a dime and doesn’t make you screech internally at the price… it’s probably fake.

You can’t ID moldavite simply by looking at it. At this point, there are even specialty molds made for faking moldavite. The whole market for the stuff is a real mess. Adding to that: there’s no reliable way to 100% ID moldavite at home.

Real moldavite can be found, but it takes a practiced eye and a lot of trust to find a good source. Moldavite is rare, comes from one small portion of the world, commands high prices… and can’t be distinguished from glass by an amateur.

Always buy moldavite with caution. It’s not a good market for a beginning stone collector to break into, but if you choose to buy online you should be realistic with your expectations. No one is looking to hawk an egg-sized piece of lime-green moldavite for $20 when it commands a per-carat price even for small, irregular samples. 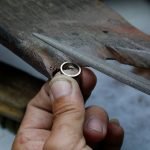 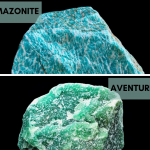