Mama Rae’s Rocks and Rhymes: A Book All Rockhounds Will Love

The Best Black Light Flashlights (Reviews): Plus 7 Reasons To Own One

The Ultimate Guide to Rockhounding Tools

Some of the links on our website are affiliate links. At no additional cost to you, we earn a commission on products purchased after clicking on those links.

Mama Rae’s Rocks and Rhymes: A Book All Rockhounds Will Love 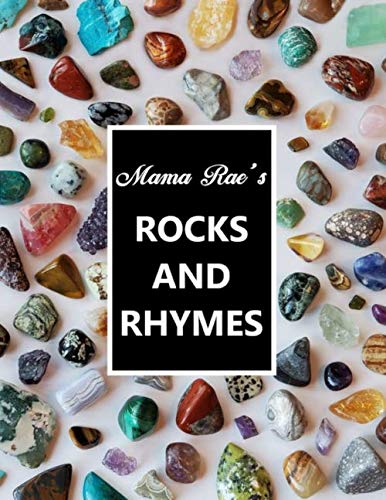 This article was written by a member the Rock Seeker Community, Suzette Rae Fell Buhr. She is the author of Mama Rae’s Rocks And Rhymes. If you’re interested in writing for Rock Seeker, contact me at [email protected]

Mama Rae’s Rocks and Rhymes: A Book For All Rockhounds

Raised in a family of rockhounds in the 1960’s, my parents, along with my sister and I, traveled and rock hunted as kids. I totally loved it. The fresh air, playing in the dirt, and finding amazing treasures!

Everyday spent rock hunting was a great adventure, and when we weren’t finding rocks outside, we were at Burnie’s Rock Shop in Madison, getting our fill of more fantastic stones, rough rock, and jewelry.

In my 20’s, I went to college in Madison, Wisconsin. Worked in Radiology and Dental for several decades. But I never forgot about my rock hunting passion. I became a member of the Madison Gem and Mineral Club, volunteering at their events and shows. I also created my own gemstone designs called Designs in a Nutshell that I worked on at the MGMC lab.

These designs were created by crushing stones that were inlayed into Walnut shells. They can be seen in Rock & Gem Magazine, April 2016.

Family has always been a huge priority in my life, and I always loved sharing my rock collection and stories with my children Alicia and Josh, and all our friends. We have rock hunted together and toured caves.

One day in 2015, in the early hours of the morning, I woke up with an “Amber” poem from a dream. I jotted it down. I thought it was cool, but I had no clue what I would do with it at that point. I was busy taking care of my family.

A month later, an “Agate” poem popped into my head. It was at that point I started writing a lot of rock and gem poems, and making a collection.

After a few dozen, I asked my son what I should title the book, and he said: “Mama Rae’s Rocks and Rhymes”. My daughter also loved the title, after all, Mama Rae was the nickname the kids gave to me when they were teenagers.

And with that, I proudly present: Mama Rae’s Rocks and Rhymes by Suzette Rae Fell Buhr.

Mama Rae’s Rocks and Rhymes is a comprehensive, educational reference book that looks at 120 rocks, gems, and minerals, and shares their stories, history and scientific facts through a poetic guide.

“Welcome gem collectors, students, and rockhounds, ages 5 to 109, this book is filled with 120 poems, for you to ponder and keep in mind. It includes a variety of rocks, gems, and minerals, with poetry from A to Z, along with over 700 photos celebrating these stone, for you to enjoy on this rock hunting spree!”

This book blends the Earth Sciences with historic treasures to enrich the learning experience. The creative writing in this book cherishes the likes of Shakespeare, Dr. Seuss, and Langston Hughes.

While it’s geared towards middle and high school students, anyone on a quest to learn can enjoy the hundreds of gem and mineral photographs.

A Look Inside Mama Raes’ Rocks and Rhymes

Below are two poems and 8 photos from K2 Stone and Peridot that I would like to share with you. To see more photos and read more about these and other amazing stones that are displayed in this book, please be sure to check out Mama Rae’s Rocks and Rhymes by Suzette Rae Fell Buhr available for purchase on Amazon.com.

The following images and poems are re-produced with the exclusive written permission of the author.

K2 Stone is found near the base of a mountain,
between China and northern Pakistan,
at the second tallest mountain in the world called K2,
named after the Karakoram mountain range in Pakistan.

The most intriguing thing about K2 Stones,
are the blue orbs of Azurite,
they lay in the gray and white Granite stone,
occasionally with green dots or streaks of Malachite.

Along with the Azurite, some Malachite, and Granite,
K2 Stones contains Quartz, Mica, and Feldspar,
the occasional flecks twinkle in the light,
but it’s the bold blue circles that are most outstanding by far.

The blue spots look like a permanent marker,
that leaked out of a broken pen,
dripping random blue ink dots of different sizes,
like a writing dilemma between an octopus and a calligraphy pen.

K2 Stone has spots that look like they’re from the action game Twister,
or even circles from BINGO daubers or Tic-Tac-Toe,
or the blue dot in the middle of a Google Chrome Icon,
or the circular chips from the game Connect 4 by Hasbro.

Long before Peridot was known about,
all green jewels were called “Emerald” gems,
it wasn’t until scientists and geologists thoroughly analyzed these stones,
and differentiated them through a microscope lens.

Peridot was found to be “literally” from “out of this world”,
when it was discovered in meteorites,
it was also detected on Mars and the Moon,
by NASA’s Mars Global Surveyor on an orbital flight.

Outer space isn’t the only place,
where Peridot gems have been seen,
they exist on our planet Earth, inside of volcanoes,
and they’re known as Olivine.

The lava bombs that exploded out of Mt. Kilauea in Hawaii,
during the eruptions in 2018,
littered the ground with Olivine crystals,
in the colors of chartreuse, olive, brown, and lime green.

In some deposits of Peridot around the world,
Diamonds and Kimberlite have also been found,
that’s because they’re both created from intense pressure and thermal activity,
like that of Peridot, being formed in Earth’s mantle and Igneous rock underground.

If you’d like to read more of the 120 poems and other information put together by Suzette Rae Fell Buhr, you can check out her book, Mama Rae’s Rocks and Rhymes on Amazon.com.