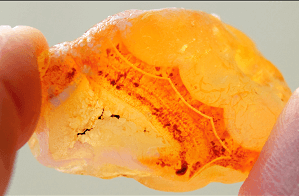 A List Of Minerals And Gemstones Found In Oregon

Oregon is rich in geological history. And it’s this rich history that makes Oregon one of the top rockhounding destinations in the United States. While other popular rockhounding states like Arizona and New Mexico have carved out a reputation for themselves in the world of rock collecting, Oregon is the silent competitor when it comes to accessibility to dig sites, the variety of minerals and gemstones that can be found, and the amount of public lands available to rock collectors. And that’s not to mention the overall beauty and wonder that is Oregon.

For years, settlers came to Oregon in pursuit of the wealth that had been found in mining different kinds of minerals.  The most common of these was gold. As a matter of fact, the gold prospectors who flocked to Oregon all those years ago are responsible for the settling of a lot of the southwestern and northeastern parts of the state.

But this article is not just about gold. The purpose of this article is to provide you with a list of minerals found in Oregon, along with other gemstones that can also be found here.

Available In Your State!

Rockhounding Oregon: A Guide to the State's Best Rockhounding Sites
$18.72
Buy on Amazon
We earn a commission if you click this link and make a purchase at no additional cost to you.

A List Of Minerals And Gemstones Found In Oregon

Oregon has proven itself to be a very productive state when it comes to looking for gold. The state of Oregon has had several gold rushes over the years, which has accounted for a total of approximately 6 millions ounces of gold found. In addition to gold, silver is another precious metal that has been successfully recovered.

Oregon is a very popular destination for gold prospectors even today. Gold has been found in nearly every part of the state. And with its numerous rivers and streams, it makes for a gold prospectors dream.

For more information on finding gold here in Oregon, check out my post, Where To Find Gold In Oregon.

As you know, there are many different kinds of agates and chalcedony. And Oregon is a great location for finding these wonderful gemstones. While these can be found all over the state, the more popular areas these gemstones can be found are along the Oregon coast, including Agate Beach at Newport, in some of the streams draining the Western Cascade, near the town of Antelope and around Prineville in central Oregon, near Hart Mountain and Lakeview in south-central Oregon, and at Succor Creek in southeastern Oregon.

You can read more about my favorite locations to find agates and chalcedony in my post, Where to Find Oregon Agates: 3 Not So Secret Locations.

While jasper falls into the same chalcedony family as agates, jasper is often times sought after as a separate gemstone. And like many other chalcedony varieties, jasper is widely available for rock collectors in the state of Oregon.

And while there are many different kinds of jasper in Oregon, the most popular types of jasper in the state are Biggs jasper, Deschutes jasper and Owyhee Jasper. Each of these are known for their unique appearance when cut and polished.

Again, jasper can be found all over the state, but I often will find lots of jasper when searching for agates. And for me, the best place to find jasper in quantity is in the Willamette Valley. Specifically on the gravel bars of the Willamette River and its tributaries.

Obsidian is a volcanic glass that’s actually a rock and not a mineral. The best place, hands down, to find obsidian in Oregon is at Glass Buttes in Lake County. Glass Buttes is a massive deposit of many different kinds of obsidian. There’s so much obsidian here that all you have to do is step out of your vehicle and literally reach down and pick it up. Dendrite Butte area is another good choice for hunting for obsidian.

You can read more about Glass Buttes in my post, Glass Butte: The Best Place To Find Obsidian In Oregon.

Oregon Sunstone also happens to be Oregon’s state gemstone. Sunstone is a feldspar crystal that weathers out of certain lava flows in the south-central region of Oregon. The color of the Sunstone is dependent on the amount of copper that’s found in the stone. This is what changes the sunstones color from yellow (less copper) to red (more copper).

Sunstone can be collected on BLM land near Lakeview, OR. The sunstones collected in this area are known for being quite clear and show the included scales and spangles of hematite, which increases the beauty of the sunstone.

Read More: Sunstone Mines In Oregon (Open To The Public)

In 1965, Oregon rockhounds voted the thunderegg as Oregon’s State Rock.

Thundereggs can range in diameter from less than one inch to over four feet, while golf ball sized thundereggs seem to be the most common size found. Incredibly plain looking on the outside, When cut open and polished, thundereggs reveal exquisite designs in a wide variety of colors. Thundereggs are found mostly in Crook, Jefferson, Malheur, Wasco and Wheeler counties.

Oregon’s state rock can be collected at fee and free sites in central and southeastern Oregon. To learn more about thundereggs, how they were formed and where you can collect them, check out my post, All About Thundereggs And Where To Find Them.

I love looking for petrified wood. It’s probably one of my favorite things to look for. These ancient wood fossils are found all over the state. However, there’s some places that are better than others. Generally speaking, the western side of the state offers better rockhounding opportunities for petrified wood.

In addition to pay to dig sites, there are plenty of areas you can search for petrified wood that won’t cost you a cent. Without question, the best place to find petrified wood in Oregon is in the same areas that I recommend looking for agates and jasper. Mixed among the other rocks in the gravel bars in the numerous rivers and streams of the cascades and Willamette Valley are excellent quality specimens of petrified wood.

To learn more about where to find petrified wood, be sure to read my article Where To Find Petrified Wood: Top Places To Discover Fossilized Wood.

In my opinion, opal is one of the most beautiful gemstones that can be found in Oregon. Oregon produces a variety of types of opal which can be found by the most determined rock collectors. Some of the varieties located in the state include, but not limited to blue, dendritic, crystal, hyalite and rainbow.

To find opal in Oregon, the central part of the state will be your best bet and where you’ll want to focus most of your efforts.

The most popular destination in Oregon for opal collectors is Opal Butte in Morrow County. This site is known for its production of common colored hyaline opal.

Another one of my favorites, amethyst crystal can be found in Oregon, although it is not as common as some of the other gemstones and minerals on this list.

Similar to the way that quartz is formed, amethyst is formed in crystal lined geodes or filling cavities in rhyolitic and basaltic rocks. And it should be noted that the amethyst crystals found in Oregon are not nearly as brilliant in color as the amethyst crystals found in South America. Oregon amethyst is much more pale in comparison, and is part of the reason why it hasn’t been highly sought after in the state.

Quartz and all of the different kinds of gemstones that belong to the quartz family (including amethyst) make up the majority of semi-precious gem material found in Oregon. As a matter of fact, there are more than 200 varieties of quartz in the world, and half of these can be found in Oregon.

If looking for a location to collect quartz, consider exploring the Quartzville Creek area. According to OregonDiscover.com, “Quartzville Creek is known for its quartz deposits. Also, collectors can find agates, jasper, petrified wood, and gold nuggets along 9-mile of the recreation corridor. Recreational mining guidelines are available in BLM, Salem District. There are private claims in the area, be careful not to trespass.”

Available In Your State!

Rockhounding Oregon: A Guide to the State's Best Rockhounding Sites
$18.72
Buy on Amazon
We earn a commission if you click this link and make a purchase at no additional cost to you.

If you live or plan on spending time in Washington, you won’t regret owning a copy of this guidebook.