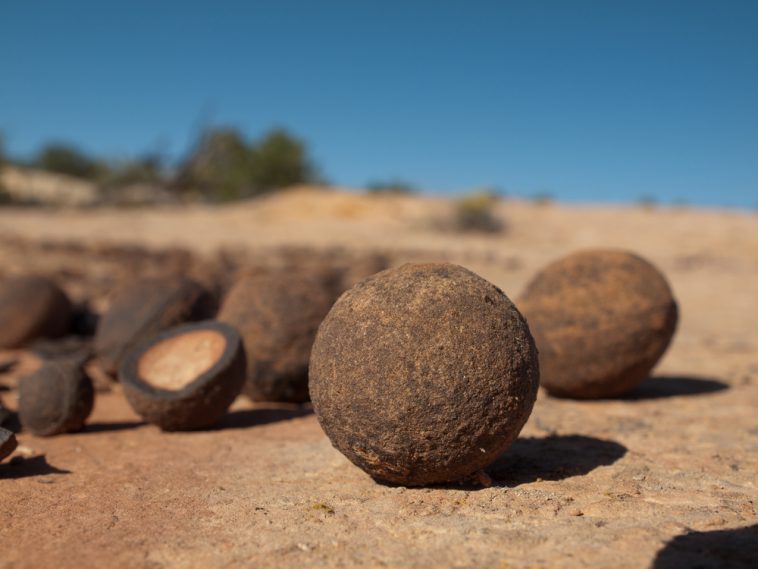 Moqui Marbles are one of the stranger bits of material that we run across as mineral collectors. They’re not quite rocks, but their uniform shape and interior containing sandstone have mystified people for years. Fortunately, the truth isn’t nearly as complicated as you’d think but it’s still quite mysterious!

Ready to learn? Let’s dig into the fascinating world of Moqui Marbles!

What Are Moqui Marbles?

Moqui Marbles or Moqui Balls, depending on who you’re talking to, aren’t actually stones. Instead, they’re a concretion of iron oxide which is wrapped around a sandstone core. Their shape is always spherical or ovoid, with an exterior that may or may not have a few ridges and fractures.

The mineral which is shaped around the exterior of the ball is actually hematite. Occasionally you’ll find polished specimens that show off the shiny exterior that hematite is known for, but in most cases, they’re left rough.

The interior of these stones is the same sandstone as the surrounding rocks.

They range from the size of marbles to larger than a fist.

Essentially, a Moqui Marble is a hematite shell that is formed around a portion of sandstone. The iron oxides give the stones a distinctive look, the black oxidized iron looks out of place in the natural red and yellow sandstone where they’re found.

These aren’t actually considered stones. Concretions occur much more quickly than stones. Indeed, concretions in siderite formations of the UK have been found to contain artillery shells and other ordinance from the WW2 era.

It’s a weird distinction, but it makes sense when you understand how they’re theorized to be formed.

How Are Moqui Marbles Formed?

No one seems to have a 100% handle on how these balls were formed, but there are a few good guesses.

Moqui Marbles are formed in Navajo Sandstone. This sandstone is a rich cream color in many locations, but the color varies. It’s known for some of the striking formations in places like Zion National Park. The color is due to the inclusions of hematite and goethite. The cream-colored stone has been stripped of its iron, generally due to water.

One of the leading theories is that water stripped the iron from the surrounding stones during rainfall and natural erosion. The water then worked its way deep inside the sandstone until it encountered water with different chemistry or a fracture to settle in.

Over time, the water continued to deposit the iron oxides that make up the shell of Moqui Marbles, creating the form we know today.

Others speculate that it could have been due to chemical action by bacteria. This is supported by two things:

Legend holds that they were playthings for the spirits in the area, left behind to let their currently living relatives know they were happy in the afterlife. The name comes from that legend. The idea of their loved ones playing with marbles after their death is a reassuring, hopeful one. Even if the truth is more mundane.

This is actually a Hopi legend. Moqui is another word that was used for the tribe but it is considered outdated currently. The tribe is officially designated as Hopi in modern paperwork.

Moqui Marbles have a rich and fascinating geological history but we’re not 100% sure how they formed yet. There are tons of working theories, but these stones are relatively young and a geological oddity even among the strange world of concretions.

Oddly enough, the answer for that may lie in another part of our solar system.

Where Can I Find Moqui Marbles?

Moqui marbles can be found in Utah and Northern Arizona.

Mars too, if you can make the trip. I’m dead serious on that one by the way, they were predicted to occur in the iron-rich Martian soil of the red planet before we landed probes. Martian “blueberries” have an almost identical makeup and they’ve been discovered on the surface of the planet since.

The rest of us will have to be content with searching the Navajo Sandstone formation. This enormous formation regularly drops Moqui Marbles from the sandstone as it erodes. This is a “look, don’t touch” sort of thing in most places.

Unfortunately, it’s also illegal to pluck these stones from any of the state parks or national parks where they reside. Other great places to observe Moqui Marbles are found on Indian Reservations.

Keep in mind: this is one of those rock laws that is actively enforced. You do not want to get caught with one in your pocket without a receipt. If you’re in these areas you’d be better off visiting a tourist shop and buying them.

They’re still found on private land in the area, which is where most of the commercial market comes from. I was unable to find any paid digs or people who advertise their property as having them. Rockhound groups in Southern or Northern Arizona are probably your best bet for finding a place to gather them.

In other words: the places best for hosting Moqui Marbles the most have gone to significant lengths to make their collection illegal.

These fascinating stones can easily be found online. Most vendors buy them from either Native Americans who are allowed to collect on the reservations or from those who have a property that hosts part of the Navajo Sandstone formation.

And the truth is… the law is right. Leaving these strange concretions behind for the next generation to enjoy is much more important than letting people collect them for their shelves.

Moqui Marbles are still a mysterious formation, and there’s much to learn from them. Fortunately, they’re relatively cheap and easy to find online… you just won’t be able to find a legal place to collect them yourself.

There’s something strange and mystical about seeing these stones, especially when they’re still in the sandstone matrix. I’m sure the fascination with them will continue for a long time into the future, as will the things we learn! 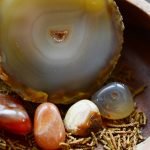