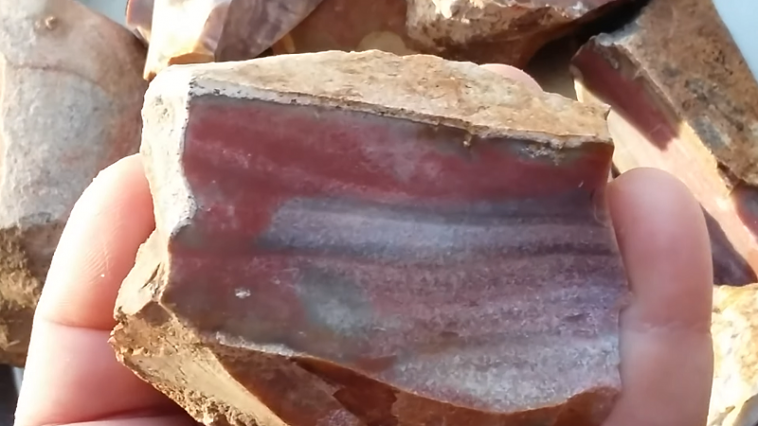 What Is The State Rock Of Missouri?

Mozarkite is the state rock of Missouri. While not a gemstone, it’s a beautiful stone that takes a high polish when it’s been worked, and it’s got some popularity behind it. That said, what is it and where can it be found?

You don’t have to wonder anymore. Let’s move right along and I’ll answer your questions about this stone!

Mozarkite is the common name for a specific variety of chert or jasper that’s found only in Missouri. It’s comprised primarily of microcrystalline silica combined with chalcedony. The structure of the stone makes it quite hard, rivaling agate at 7-7.5, and it’s suitable for jewelry use.

The name itself is a portmanteau of Missouri and Ozark, which is natural since… the stone comes from the Ozarks in Missouri.

The stone has varying amounts of chalcedony, and it’s usually simply referred to as a chert. The distinction between jasper and chert is debated, but in the end, it’s much simpler than most people make it out to be. Chert is usually just dull-colored jasper.

Mozarkite has relatively dull colors, coming in with browns and pinks primarily, but some specimens show other colors. In particular, some bits of Mozarkite hold a soft blue or green that looks great as a contrast to the other colors found in the stone.

I’ve seen Mozarkite Jasper used as a trade name for the stone. It usually it implies the pieces are a bit more exotic than the light pink and orange that make up a lot of the material available. That’s not always the case.

Mozarkite’s hardness also lent it well to neolithic reduction, or knapping, for tools. It was a prime tool material for natives in the area, and it’s still a prized material for knapping. The interspersed chalcedony creates a material that generates great conchoidal flakes and doesn’t take excessive force to shape.

These days it’s mostly seen in jewelry and stone collections. The stone’s hardness means it can be used in rings and bracelets, and the varying colors mean there’s a shocking variety of different colored cabochons of the material out there.

But the takeaway is simple: Mozarkite is a multi-colored chert that’s known for varied colors and an extremely hard, compact structure that lends itself well to tool use.

Mozarkite is found exclusively in Missouri, primarily in Benton County. Specifically, the area around Lincoln seems to be the hot spot for the stone.

There’s also a considerable amount of the stone to be found near Warsaw, Missouri.

It seems the stone can be found throughout the area. Highway cuts and creek beds are a great place to start looking. There are some actual mines as well, but I was unable to dig up any information about public access.

The stone is quite common in the area. It seems to come in a few different types, which makes sense since it’s a metamorphic stone.

The most prized samples are “gemmy.” That just means they’re hard enough to cut and polish well, and this is what most of the mozarkite you’ll see cut is made from. The consistency will be similar to jasper or chert from other areas, and it has a very tiny crystalline structure.

The second type is still valuable and sometimes cut. It’s made up of larger crystals that give it a different sort of feel. In the article linked above, the author said the locals refer to it as “sugary” which is an apt description.

Lastly, the stone can be found with a sandy, coarse texture. These are interesting but may not be suitable for cutting in the majority of cases. It’s just another sort of leaverite for most people, but sometimes a bit will show up with interesting colors.

Digging around for mozarkite is the same as going for jasper or agate for the most part. You need to find an area, find a spot where there are dense stones gathered up, and start digging.

I recommend bringing the following with you:

You’ll also want to be dressed appropriately. Boots, jeans, and other tough clothing can be surprisingly resilient in the face of thorny vegetation or sharp rocks.

Read More: The Ultimate Guide to Rockhounding Tools and Supplies

Make sure to bring some water as well. More than you’ll need to drink. You can pour it on dusty rocks to get their true colors to show.

I also recommend familiarizing yourself with the stone’s rough form before going out. Look for big lots on sites like eBay and observe the shape and exterior coloration. Most Mozarkite is pink on the exterior, which makes it immediately recognizable.

The exterior of the stone will tell you a lot about what is inside the nodule. You’ll be able to find out if it’s worth cutting just by feeling the outside. Good material for cutting will be very smooth to the touch, especially if it’s been river polished.

The pieces that have a sandy feel won’t cut well or take a good polish. Even tumbling them can lead to problems, so be selective in what you decide to take home.

If you decide to bring an entrenching tool or folding shovel along, you may want to try digging in spots. You should make sure of the legality of this before you go for it, but sometimes you can find some treasures underneath the rest of the material.

And that’s about it! If you’re familiar with hunting jasper you won’t have any problems. Mozarkite is a unique stone, and good-quality samples can be stunning.

Good luck and have fun! Mozarkite is still there for the taking, it’s just a matter of getting out there and taking a look! 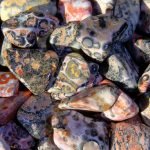 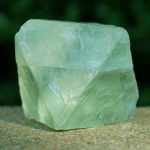