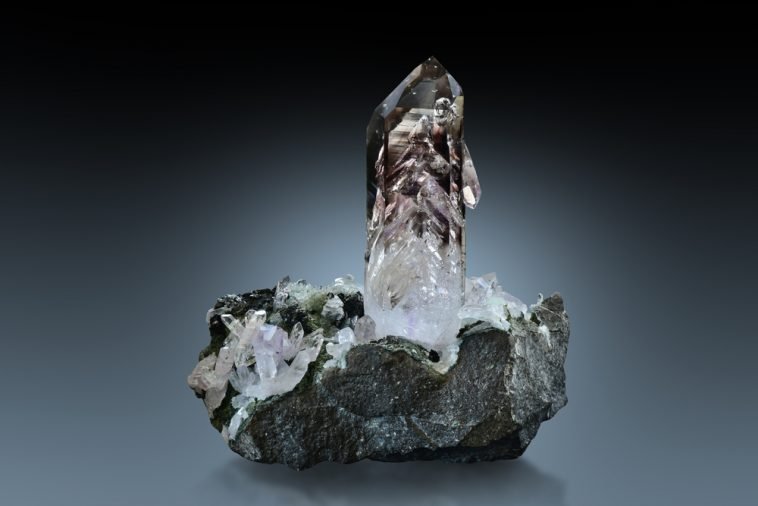 (Read This Article Ad-Free In The Rock Seeker Club)

Phantom quartz is an interesting phenomenon that’s found in quartz crystals. For many people, they seem almost impossible, but there’s a reasonable explanation for the formation of these unique crystalline variants. Whether for metaphysical or aesthetic reasons, they’re one of the more common variations of quartz crystals that people seek out.

So, let’s get down to it and take a look at Phantom Quartz and find out if they’re real and how they’re formed underneath the surface of the Earth!

What is a Phantom Quartz?

Phantom Quartz are a quartz crystal that seems to contain another crystal. The clear nature of quartz allows you to see another fully formed and terminated crystal inside the larger one.

In some cases this is very distinct, with one crystal contained clearly within another. In other cases, the distinction can be harder to draw since the quartz inside may be malformed, twinned, or otherwise not resemble a single quartz crystal clearly.

In many cases, the visual indicators are very ghost-like, often semi-clear white streaks showing the outline of the contained crystals. The best examples are more clear.

Phantom Quartz specimens are often prized by collectors. Like most of the odd growths of quartz those into metaphysical qualities of stones claim that it has extraordinary powers.

There are a few different types of these specimens, but the most common are simple clear quartz with a bit of white inclusions. These are generally chlorite that occurs during formation, and we’ll discuss that in more detail below.

If you’re looking for Phantom Quartz you may have stumbled across some Garden Quartz labeled as Phantom Quartz. I’m not sure where the distinction comes from, but it’s common enough that you’ll regularly come across them when searching for phantoms.

Garden Quartz is simply included quartz crystals, generally from Brazil. These often have complex intergrowths of chlorite and metallic minerals on the interior, forming a “garden” similar to that found in Moss Agates.

This form is also sold as “lodolite” which is generally used as a Spanish description for mudstone. It’s kind of a mess, which isn’t uncommon in the stone trade.

These quartz can be completely natural, natural and dyed, or wholly synthetic depending on the source. For the chlorite to have gained color it generally needs to have been exposed to air, and the same cracks which allowed this also make for easy dyeing.

These really need to be evaluated on a case-by-case basis, but anything with very strong colors is immediately suspect.

Yes, they’re pulled from the ground that way. There are also some fakes out there, and synthetics made from fused quartz powder, but Phantom Quartz is a long-recognized phenomenon. These are generally pretty obvious to the trained eye since they often include strong colors as well.

Fakes are sometimes made with glass, but more often they end up being synthetic quartz instead.

Since synthetics are essentially the same material, it’s hard to determine whether or not an individual sample is synthetic. You can’t just hardness test like you would with glass.

The best indication that what you’ve got is fake is in the striations on the exterior of the crystal. Natural crystals will generally have horizontal striations, creating a sort of ladder effect if they’re deep enough, while synthetic quartz will have vertical or diagonal growth patterns.

If you’re questioning a specimen you might purchase, I’d suggest looking for similar specimens with proof they’re natural from the same region. Anything exceptionally interesting is likely to have the provenance included with it… if it’s legitimate. That’s the sort of thing high-end rock collectors take note of, after all.

For colored specimens, I suggest taking a look at proven examples before buying. The most common “chlorite” phantoms I’ve seen are clearly different in structure from the natural ones known in places like Arkasnas. That would suggest something is seriously amiss.

How Are Phantom Quartz Formed?

Phantom Quartz can seem like a mystery, but the way they form is well understood. In essence, a brief pause in the formation of the crystals allows for the inclusion of other minerals. These define the outer edges of the “internal” crystal, capturing the quartz’s image from an earlier stage of growth.

The inclusions are unlikely to coat the entire surface of the younger crystal in the relatively short (geologically speaking!) period of time where growth is uninterrupted. For that reason, many phantoms will only have parts of themselves defined, giving them a more ethereal look than the rarer cases where a crystal is completely coated before formation begins again.

The most common mineral seen in these seems to be some form of chlorite, but there are others that find their way in. These include such age-old favorites as iron, which can leave a rusty color behind.

In some cases, there is a clear difference in the color zoning. The most common example I’ve seen is a smoky quartz “contained” in a standard clear quartz cluster.

Essentially, these crystals are formed because they were interrupted at some point during their growth. A similar thing occurs with druzy crystals, but in those cases it appears that growth has stopped entirely before a small amount of silica grows as a secondary, sparkling coating over the exterior of the formation.

Where Are Phantom Crystals Found?

Phantom Quartz isn’t unique to one location, no matter what some dealers will tell you. Instead, it’s found in quite a few places and there’s a chance of their formation in any area where there are quartz crystals.

Many of the best samples seem to come from Brazil or India, both also known for their variety of quartz already.

In the United States, I could only find confirmation of one location that seems to produce a lot of phantoms. It’s one of the mines located at the world famous Wegner Quartz Crystal Mines. The specific mine is called the Phantom Mind and is open to fee digging for those who’d like to claim their own from the Earth.

Related: How To Find Quartz Crystals (Tips and Resources) 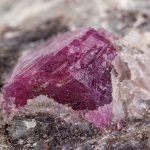 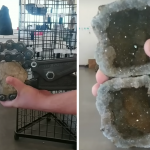