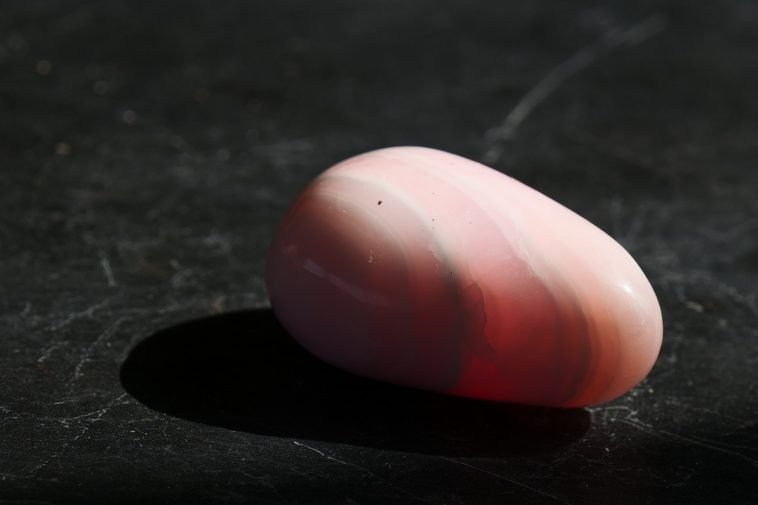 For new rockhounds, especially those still relying only on sight, the difference between pink calcite and rose quartz isn’t immediately obvious. There are some serious differences that are easy to check if you’re trying to determine which you’ve got in hand.

So, let’s take a closer look at the properties of pink calcite versus rose quartz, and then I’ll help you scratch the surface of figuring out which is which.

What is Pink Calcite?

Calcite is one of the most common minerals to find, especially in crystalline form. It’s one of the many forms of the chemical calcium carbonate, which exists along a spectrum that also includes aragonite and dolomite.

Calcite is naturally colorless, but it’s found in many shades. Blue and pink calcite are both readily available in bulk, being among the most common colors of the mineral. The coloring agent is caused by tiny inclusions of manganese minerals which give it a nice shade of pink when spread throughout the crystals.

Calcite itself is known for occurring in many different crystalline forms. You could fill a cabinet with just the different forms of calcite before you even get into the many colors it comes in. This has made it a favorite for many collectors since it’s common, varied, and relatively cheap compared to more exotic minerals.

Calcite is a soft mineral, sitting at 3 on the Moh’s scale of hardness. It’s a favorite of carvers, especially for decorative objects that aren’t meant to be worn. While it’s very soft it also takes a nice polish and the lack of hardness makes it quick and easy to work.

Calcite’s simple nature means that it’s found very often, but pink stuff only comes from certain localities. Pink calcite is often massive, rather than in well-formed singular crystals. That just means that it’s comprised of interlocking crystal systems that create a single solid mass rather than individual crystals. It doesn’t have anything to do with size.

Put together, we’ve got a soft, beautiful mineral that’s highly variable in crystal shape. Pink calcite tends to be massive and is colored by manganese minerals.

What is Rose Quartz?

Rose Quartz is a light to deep pink variation of quartz. It’s quite a bit different from the normal crystals we expect to find from quartz and even some variations such as citrine and amethyst. Namely, the normal quartz crystalline form of hexagonal crystals with a pyramidal termination are almost never present.

Instead, virtually all rose quartz is massive in nature. The interlocking quartz crystals end up creating a system that looks quite similar to pink calcite. Rose quartz is found on rare occasions as single crystals, but those with good color, clarity, and lack of heavy inclusions are even rarer and can fetch high prices.

Massive rose quartz sometimes displays asterism. Asterism is the star that’s sometimes seen in sapphire and ruby cabochons, where included rutile creates an optical effect similar to a six-rayed star. This is particularly the case with material from South Dakota, which is one of the best places to find this mineral in the world.

Like all quartz, rose quartz is very hard. Quartz is the mineral that defines 7.0 on the Moh’s scale, although some massive pieces may be slightly softer. Quartz is silica, or SiO₂, a common mineral found across the entire planet.

Rose quartz is colored by inclusions of different minerals in its crystalline lattice. Aluminum, titanium, and manganese have all been found in varying levels in samples of rose quartz. It’s similar to the way that amethyst is colored, where the elements actually end up in the crystal.

So we have a hard, pink mineral that generally occurs in massive form.

These stones are both pink, of course, and have a similar appearance.

The similar appearance is the closest they get together. They don’t even have the same coloring agents despite the similarity in coloration.

The other place where they’re similar is in their crystal formation. Both pink calcite and rose quartz are most often seen in a complex intergrowth of crystals, which we call massive. Crystal shape usually matters little in the formation of massive minerals, they generally end up with a similar blocky appearance due to the different growing crystals.

You’ll only ever confuse these minerals if you rely only on sight. Telling the difference between them is an easy matter.

How To Tell the Difference Between Rose Quartz and Pink Calcite

Most of the tests available to a hobbyist rockhound will quickly tell you which of these stones you’ve got.

Hardness is the easiest to check.

Grab a knife, then try and scratch the rock. You’ll leave a streak on either stone, but they’re very different. Calcite will actually scratch, which can be felt with your fingernail. With rose quartz you’ll end up leaving a streak of metal scraped off the knife due to the hardness difference, this is silvery on close inspection and doesn’t actually scratch the stone.

The other easy test is the vinegar test.

Take an eyedropper and place a couple of drops of vinegar on the stone. Silica is entirely unreactive with the weak acetic acid solution, but calcite will react with fizzing and bubble formation.

Enough vinegar will even cloud the surface, so be careful how much you use.

Since these two tests are quick and easy there’s no need to go any further in your testing. I prefer the scratch test, finding it does less damage to the stones, but either will work just fine.

And that’s all there is to it! These stones may look similar but they can be told apart very easily once you get under the surface of the matter. 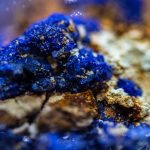 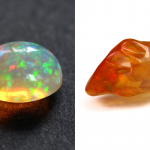