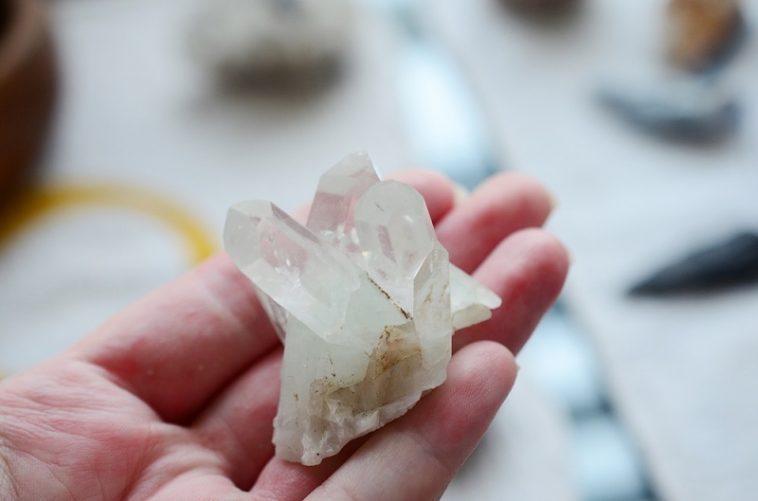 Quartz is one of the most sought-after crystals among collectors. In addition to it’s shimmering clarity, quartz specimens vary widely and many people find them very attractive. It’s a lot of information to take in for a newbie.

If you’re fascinated with this timeless stone, then read on. We’re going to teach you what quartz is, the varieties to look for, where to find them, and then give you some tips to make any collecting trip a success!

Quartz is a macrocrystalline form of silicon dioxide(SiO₂ or silica). The crystal formations are visible to the naked eye, unlike cryptocrystalline forms of silica like chalcedony or jasper.

Quartz crystals are usually hexagonal, with six sides and a terminated point resembling a pyramid. Some crystals are double terminated, meaning they have a point on both ends.

Quartz has a long history of use, and not just as jewelry. Rock crystal has been used to make everything from sculptures to crystalline plates and bowls. The crystals are also favored among those who believe in the healing power of stones.

Quartz also displays a strong piezoelectric effect due to its structure. It’s commonly used to power watches and in audio sensors, where its unique properties can really shine.

Quartz is also the main constituent of a wide variety of stones that we’ll cover in a moment. The truth is, however, there’s enough variation within just “regular” clear quartz to keep a collector occupied for a lifetime!

What Types of Quartz Are There?

Prasiolite is an olive green quartz variety, which occurs very rarely in nature. Most known deposits are mined out and the bulk of the material available is irradiated or heat-treated amethyst.

Rutilated Quartz- A specific inclusion that consists of black rutile crystals contained in the quartz. Low-quality specimens may look “spotted” but high-quality rutilated quartz allows the crystals to be seen in their entirety.

Smoky Quartz is a darker variation of quartz, ranging from dark brown to almost black in hue.

All of the above there are many sub-variations, but they’re the common natural colors.

For those who specialize in collecting quartz crystals, however, crystals are often rated by the type of formation they’re found in. The following are some of the more common varieties:

The list is really endless, especially for those who get into the crystal healing side of things.

Quartz is often treated, and some of the fancier varieties are synthetic in origin.

That’s not necessarily a bad thing, but any collector should be aware.

Heat treating and radiation treating are both common for quartz gemstones, bringing out deeper colors or even changing them. Heat-treated amethyst is often sold as citrine, for instance, but it should be noted that the only difference between amethyst and citrine is the temperature at which they were formed.

Since they’re chemically identical, you usually have to judge based on how the colors look. In formations like clusters, the stones will often have a “burnt” look to their coloration, with the deep orange even fading into brown at some points.

Other stones are almost always treated, such as prasiolite. Natural stocks of the stuff are low and the vast majority is heat-treated or irradiated to bring in the characteristic olive hue.

In addition to treated specimens, collectors will also find “mystic quartz” available. It’s a pretty, iridescent piece of quartz but it’s not natural in the slightest. Instead, these stones have a thin layer of gold or titanium deposited on their surface.

In other words, it’s wholly synthetic and it really only appeared on the market in the late 1990s.

Anytime you see a “new” variation of quartz available do your research. Most aren’t natural. For many collectors, that’s an important distinction.

Where Can I Find Quartz? Quartz crystals are common, but they’re not something you’re going to dig up in your backyard. If you’re on the hunt to find quartz crystals in the wild, you’ll have to find a good hunting ground.

They occur across some big portions of the USA, but the most valuable deposits for collectors are in the following states:

Other states that produce good amounts of quartz are:

Some of these areas have paid digs, which are your best bet as a newbie. They’ll often have instruction on site, the equipment you’ll need, and are located directly on large veins of quartz.

In other cases, you may have to dig up a location yourself. Quartz is common enough that most rockhounds aren’t too protective of their spots, so connecting with online communities is a good way to find excellent hunting grounds.

Unfortunately, most quartz suitable for collecting is in large deposits. In some areas riverbeds, the go-to for new rockhounds, produce quartz cobbles. Unfortunately, if you’re looking for actual crystals you’ll have to head to the source.

Must Have For Rockhounds! Easy To Use Rock Collecting Pouch
This might be my all time MUST HAVE rockhounding tool. This ammo pouch doubles as the ideal rock collection bag. Check it out for yourself!
Buy on Amazon
We earn a commission if you click this link and make a purchase at no additional cost to you.

If you’re going to a paid dig, ask the people there how to do things. Every site is different when you’re rockhounding and the people who work there are going to have the best ideas for finding good crystals. They may even let you know where richer deposits are.

If you’re headed out on your own, you’ll need the usual rockhounding equipment set:

Quartz mining isn’t like finding stones that occur in nodules. In most cases, you’re going to have to dig and may even need to break down some rock.

In that case, a folding shovel(like the famous e-tool used by the military) and a small sledgehammer are good ideas to bring along. The hammer should be a couple of pounds heavier than your rock hammer to be of the most use.

You may also want to bring a pry bar. I prefer short flat bars with thin edges. You want as much surface area contact as possible when prying open a stone, it will give you better leverage.

You’ll often dig into “pockets” of mud or clay while excavating stone. These pockets are the richest source of crystals, the silica forms into crystals in the softer matrix. If you’re digging on the ground make sure to break open any dirt clods or clay balls you find, crystals can be found in their interior.

The important thing is to look for clay and mud in most cases. In other cases the crystals form in actual rock, making them more problematic to extract. These crystals are often the best, however.

So, apply the knowledge in the real world and find the next great specimen for your collection! 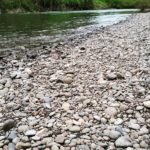 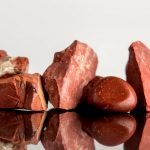