Montana is known as the treasure state, and for good reason! That’s because over 150 years ago, the hills of Montana were absolutely full of gold prospectors drawn by the dreams of striking it rich.

In more recent times, other precious stones like saphires have been what calls prospectors to Montana.

Today, Montana offers a huge variety of options for rockhounds and prospectors. From gold to agates, sapphires and even fossils. And many of these sites are free and open to the public year-round.

But first, let’s take a quick look at just a sample of some of the rocks, minerals and gemstones that can be found in Montana.

The garnets are referred to as a group of equivalent complex silicate minerals that crystallize as dense and resistant in the isometric crystal system; in ancient times, due to the relative hardness and abundance in nature, humans used them as an abrasive material.

The deep red color of common garnet created a demand for the mineral as a precious and semi-precious stone and is a major niche in the industry that garnet continues to supply.

It is also an indicator mineral for calcium-silicate hydrothermal alterations related to Skarn-type deposits.

This mineral has been found in these locations.

Rhodonite is a mineral from the group of silicates, with the chemical formula Mn (SiO3), where 54.1% of the volume is MnO, and 45.9% corresponds to SiO2, it is found in metamorphic rocks associated with manganese minerals.

In rocks affected by contact metamorphism, metasomatism and hydrothermal processes, it is mainly used as an ornamental stone.

Rhodonite comes in pink, red, and reddish-brown colors, but when exposed to air, it turns brown.

This mineral is generally found in metamorphic rocks associated with manganese minerals.

They are also found in rocks that have been affected by contact metamorphism, metasomatism, and hydrothermal processes.

This mineral has been found in these locations.

Serpentines is a group of minerals of similar origin and physical properties, complying with the following generalized formula (X) 2-3 (Y) 2O5 (OH) 4, it is made up of more than 20 minerals, among them, we have lizardite, antigorite, chrysotile, among others.

Serpentine is the result of hydrothermal metamorphism suffered by ultramafic rocks such as peridotite, which is composed of olivine.

It has been used in the asbestos industry as a heat insulator due to its fibrous habit.

It is used in the field of jewelry as a gemstone to replace a jade for its similar appearance.

Sculptures can be carved, and ornamental uses are made of this mineral.

It can also be a replacement for green marble and used as a fertilizer.

Beautiful Serpentine has been found in many locations around Montana, but there is no specific location where you can go to; you just have to pick a mining site.

It is a bit random when it comes to this unique mineral, at least in the state of Montana.

Staurolite is a mineral that belongs to the group of silicates and has a characteristic brown and black color. It can also have slight white and gray shades.

It stands out for having concentrations of iron, zinc, and magnesium, although the amount varies according to the specimen.

This crystal is used to carve pieces that are very attractive to the eye.

It is also a variety highly sought after by collectors of precious and semi-precious stones. This specimen looks great in the display case, and it can even be a lovely gift.

Imperial topaz consists of a variety of topaz stone that has shades between orange and yellow. It is also known as golden topaz due to its color characteristics.

Likewise, its name is related to the Island of the Topaz, an ancient region of the Red Sea. At present, it is known as Zabargad Island, where apparently the first specimens of this natural product were found.

Its main use is in jewelry, so it is common to see this product in all types of garments.

The wonder stone jasper is an impervious microcrystalline chalcedony or quartz. This beautiful stone is considered silicon dioxide, with its origins in the USA.

Its beautiful wave-like colors make it a big attraction to collectors; you can find it in yellow, violet, maroon, and pink.

Many do confuse it with the mookaite jasper that originates in Australia.

In geology, kimberlite is described as a magmatic rock with a high magnesium content (MgO greater than 25% by weight); therefore, it is considered a variety of rock belonging to the group of peridotites. Thus, kimberlites are ultramafic intrusive igneous rocks.

This rock is very important because it is considered the main source of diamonds throughout the world.

Also, because its components originate in the mantle areas, they represent a valuable source of information about the earth’s layers and especially the mantle.

It is known that some 6,400 kimberlite pipes or diatremes have been discovered in the world; however, only 900 of them have been classified as diamondiferous kimberlites and only 30 of them have passed an economic evaluation and have proven to be profitable.

Here are some of the locations you have to explore in order to find them.

The optical properties of diamond include a high refractive index, high dispersion, and brilliance, giving it the title of the best-known gemstone on the planet.

Diamonds have been found in these locations.

The sapphire stone is one of the most demanded precious stones in the world; it has an excellent resistance to wear, great beauty, and its prices are pretty accessible in the jewelry market.

Naturally, the sapphire stone is a mineral that purely appears with intense blue colors; however, it has some varieties that go from greenish blue, green, and almost white; all of these color changes appear because of its impurities.

In the global market for gems, jewelry, and precious stones, the real attention of the consumer is directed only towards a small group of gems that are known as “the four great gems”.

This group is made up of diamonds, rubies, emeralds, and sapphires.

Sapphires have been found in these locations.

The dryhead agate is one of the most beautiful of its kind; it is a form of fine-grained microcrystalline Quartz.

With its beautiful color patterns and bands, you will immediately fall in love with it as soon as you see it.

Agates can have many distinctive styles and patterns, but each agate is unique in its own habit, as no two agates are alike.

A generally accepted requirement in the definition of agate is that it must have bands. This quality distinguishes it from other forms of chalcedony that are not grouped.

Dryhead Agate has been found in this location.

Where To Go Rockhounding In Montana

In this post, I’m going to list the some of the best rockhounding dig sites you can visit in Montana. So grab your rock hammer and your gloves and get out there!

Located on the Pioneer Scenic Byway south of Wise River, Crystal Park is an inspiring public dig site where you’ll find amethyst as well as smoky and brilliant clear quartz scepters in a variety of forms. The area is typically open from Memorial Day to Labor Day, with a $5-per-vehicle entry fee. You’ll need to bring your own shovel and screen

According to GatorGirlRocks.com, The Crystal Park site is under claim to the Butte Mineral and Gem Club and is jointly maintained and supervised by the club and the Beaverhead National Forrest.

The site is located 7,700 feet above sea level in the Pioneer Mountains of the upper Big Hole Valley southwest of Butte, Montana in the Beaverhead-Deerlodge National Forest.

The site has been a favorite with recreational rockhounds for decades because of the exceptionally well-formed quartz and amethyst scepter crystals.

Lucky rockhounds also might find a “Japan Law Twin,” a pair of crystals joined at an unvarying angle of 84 degrees, 39 minutes.  Another prize is a “scepter,” a larger crystal on the end of a smaller one.

The Butte Mineral and Gem Club began filing mineral rights claims at the area in the late 1950s.  In 1976, the group entered into a cooperative agreement with the Forest Service for the management and development of Crystal Park for public recreation.

The club contributed funds for a boundary fence and portable toilets.  Crystal Park is about 65 miles SW of Butte.

From Butte, take Interstate 15 south about 25 miles to the exit to Divide.  Take MT 43 about 11 miles to the town of Wise River.  At Wise River, take the Pioneer Mountains Scenic Byway Road approximately 25 miles to Crystal Park.

About six miles west of Wise River, the Calvert Hill Mine is a good place to find epidote, aquamarine, scheelite and garnets. The mine itself was a tungsten mine, and is no longer operating. In its tailing and around its ponds are plenty of beautiful rocks that are easy to find.

The Tom Miner Basin, which is federal public lands managed by the United States Forest Service, contains a petrified forest.  The specimens are interesting to see.  Subject to federal restrictions and obtaining a permit (in advance), individuals are allowed to collect a single twenty cubic inch specimen (about fist sized).

Gem Mountain Sapphire Mine is a family owned business and is operated by the Cooney Family for the purpose of entertaining treasure-seeking visitors from around the world.

The mine is situated in a very accessible area of spectacular natural beauty that is rarely visited or seen by millions of visitors who hurry by on their way to either Glacier or Yellowstone National Park.

The mine provides everything you would need to find your own Montana Sapphires. They have a fantastic hands on staff that can do all the heavy lifting and show you exactly how to find your Montana sapphires.

The area around Anaconda has long been a favorite destination for rockhounds. Here you can find old tailings of scheelite and epidote at Cable Mountain, northeast of Georgetown Lake. Argilite and quartzite can be found west of the lake.

However, gems and precious minerals aren’t the only things that can be found in the ground around Southwest Montana. In the remote southwestern corner of the state, near the town of Lima, evidence of prehistoric ocean sea beds west of the Continental Divide can be seen in modern-day displays of tempered rocks, lava and fossils.

The Spokane Bar Sapphire Mine & Gold Fever Rock Shop offers mining for beautiful Montana sapphires. You can dig for a fee and the shop will rent you the proper equipment if you don’t have your own.

Here visitors can screen gravel from the Missouri River gravel terraces.  The geologic structure called Spokane Gravel Bar is a deposit consisting of unsolidified sediments, deposited by an ancient river.

The site is located near Hauser Lake along the Missouri River near Helena, Montana.

Discovered in the early 20th century by geologists mapping the Missouri River area, the site was named after the Spokane Hills that are composed of Spokane shale.

The present river level is more than 50 m below the ancient river deposits.  Four major gravel terraces are visible on both sides of the river. 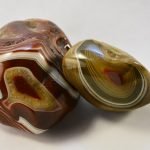 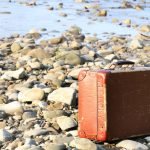