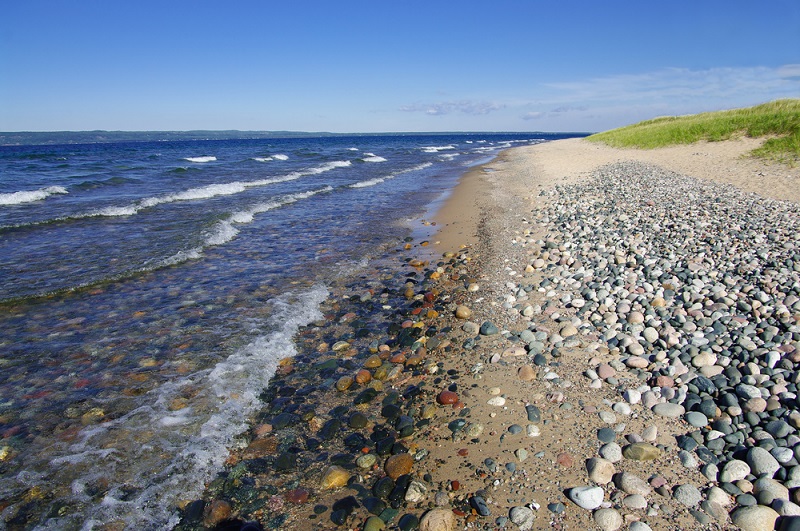 Minerals and Gemstones Found in Michigan

The 11th largest state, Michigan is comprised of two separate peninsulas. The Upper Peninsula is known for its lush natural resources, including the state’s gemstone, Isle Royal Greenstone. According to the USGS, the state contains 1853 mines.

Most of Michigan’s gemstones and minerals are formed following lava cooling or can be attributed to the minerals brought from lava. This is in part due to the Midcontinent Rift System, near Lake Superior. Moreover, glacial movements have also given the state a wealth of gemstones.

Found in gem-quality only in Michigan, Isle Royal Greenstone is Michigan’s state gemstone. These rare gemstones are green or blue and have a unique turtle shell pattern. While its primary location is within its namesake, Isle Royale National Park, it may also be found in the Keweenaw Peninsula.

The more technical name of the gemstone is chlorastrolite, meaning green star stone. This name arises, in part, due to how its minerals crystallize from the cooling of hot lava. It is in Greenstone Ridge, the largest lava flow in the United States, that these state gemstones are formed.

Chlorastrolites are typically fairly small and rarely found larger than an inch in diameter. The largest ever found was 1.5 by 3 inches and is located in the Smithsonian.

Owing to its rarity and its small size, chlorastolite does not have many aesthetic or jewelry-related uses. That being said, several locals have crafted stunning, personalized jewelry, featuring the state’s gemstone.

The 47th element and a precious metal, silver can be found in certain parts of Michigan. Those looking to find this highest conducting metal would do well to look along the Iron River. It has also been found in various mines in the Upper Peninsula.

Due to its nonreactive nature, it can be found in its elemental form in nature. This is unlike most metals, which are found as oxides, carbonates, or other types of ores. Perhaps, it is for this reason that it became one of the seven metals of prehistory.

Early cultures used it as a type of currency. Today, even a cursory list of its uses would be exhaustive. Suffice to say, silver is ubiquitous in modern civilization, extending into jewelry, electronics, medicine, technology, figurines, and more.

Silver is a highly lustrous element, which is where its original name comes from. It was first known as argentum, the Latin word for shiny or silver. From that arose several mythology stories and its periodic table prefix, Ag.

A brittle ore of iron, hematite is common in Michigan mines. In particular, it can be found in the Jackson and Beacon Mines. It is there that prospectors can expect to find the specular variety of hematite.

The gemstone hematite refers to an iron oxide ore, appearing sometimes red, black, or gray. Specular hematite, or specularite, contains small crystals of iron-rich mica. This gives it a silvery sheen that tends to sparkle in the sunlight.

Early in civilization, hematite was used for its red pigments with some cultures using it for cave chalk and others for dying clothes. It was this blood-red color that earned the gemstone its name, which derives from Ancient Greek as blood-red stone. Some have since speculated that hematite has blood healing properties.

Most commonly, hematite is used to make jewelry and alter pieces. Recently, it was discovered on Mars, where it exists in tiny balls, since dubbed blueberries.

Michigan is the number one producer of the yellowish sulfate mineral, gypsum, in the United States. In the state, gypsum can be found in glacial deposits and the Michigan Basin.

The mineral is very soft, having a Mohs hardness of 1.5 – 2.0. This makes it excellent for use as chalk. Another of its prominent uses is as various plasters.

In fact, one of the origins of its name is from the Greek word gypsos, which means plaster. Dehydrated gypsum is what makes the popular “Plaster of Paris”.

Though gypsum usually appears yellow and cloudy, it can take on several appearances, depending on trace impurities. Copper will give it a greenish hue, while iron turns it a reddish-pink.

The Banded Iron Formation, or BIF, jaspilite consists of alternating layers of quartz and hematite. It appears with bands of reds, grays, silvers, and blacks, depending on the iron content.

These gemstones represent the largest source of iron on Earth, which is made ironic when considering they no longer are formed. BIFs, including jaspilite, are dense sedimentary rocks formed generally in the Proterozoic. This makes Michigan’s supply all the more precious.

One of the best locations to find jaspilite, or jasper taconite, is the far-Western portion of the Upper Peninsula. There an Ironwood Formation of Jaspilite can be seen. It contains layers of bright red jasper, dark red hematite, and silvery magnetite.

In addition to serving as a source of iron, jaspilite also is used in jewelry and small figurines. Some have given in metaphysical properties, as well. Owing to its age, it is typically associated with longevity.

An extrusive igneous rock, basalt is formed as the lava flowing on top of the Earth’s surface cools. Generally, iron- and magnesium-rich, it is a very hard mineral. Thus, its name arises from the Latin word, basanites, meaning very hard stone.

As 90% of all volcanic rock is classified as basalt, it is further divided by mineral content and texture. In Michigan, iron-rich basalt is typically encountered. These can be seen along Lake Superior shores, specifically at the Keweenaw Peninsula and Isle Royale.

Owing to its durability and formation, basalt is found in some of the harshest conditions, including acidic hydrothermal vents. It has also been discovered on the moon. There it can be seen from Earth as dark spots on the moon’s surface.

Today, basalt is used for its hardness. Primarily as a tool for construction, it is seen in statues and cobblestone streets.

These northwestern-specific agates are formed from cooling lava eruptions. Owing to the region’s high iron content, they have been imbued with rich reds and burnt oranges. The perfect spot to find them is right along the shores of Lake Superior, where the current takes them after cooling.

In particular, prospectors can head to Muskallonge State Park or Whitefish Point. The former is the site of the annual Rock on Lake Superior Agate Festival, which features the banded beauty.

The primary use of Lake Superior Agates is aesthetic. They can be found in several local jewelry pieces and figurines.

Along with gypsum, Michigan is the number one producer of limestone in the United States. In fact, the state’s Rogers City holds the largest limestone quarry. Accumulations of the mineral and its quarries may be found along Lake Huron’s shores.

Limestone is a crystallized calcium carbonate. It is easily eroded by acid rain to produce carbon dioxide. Though at times troublesome, this can create beautiful caverns and canyons.

Limestone’s uses are fairly wide-spread. It can be used directly as an antacid, whitening agent in toothpaste, or in bath salts. More industrially, it is used in several building materials.

Existing in a range of colors, fluorite is a mineral of calcium and fluorine. It usually appears transparent, but can take on opaqueness due to impurities. Typically, it appears in a semi-transparent green or violet.

Its name comes from the Latin word to flow, indicating its first use as a flux in smelting. Now, it is known for a great many uses, including jewelry, lenses, semiconductors, and a source of elemental fluorine. It is also fluorescent.

As a halide mineral, it contains quite unique properties. Though it is the defining Mohs hardness of 4, fluorite can be quite brittle. It also has a relatively high specific gravity of 3.2.

Fluorite is not common within the United States and is typically imported. Still though, Michigan hosts a few treasure troves of the bright gemstone. It may be found in Keweenaw County in limestone cavities.

The so-called magnesium limestone, dolomite is crystallized calcium magnesium carbonate. It typically appears opaque white with shiny grey impurities. Its appearance can vary based upon its formation.

In Michigan, dolomite is collected as a crushed stone to be used for construction. Several quarries are designated to this along the lower peninsula. There several rocks, including limestone are processed together.

Though it is primarily used in construction and to produce magnesium, dolomite may also be used to make ornamental pieces.

Blue slag is a man-made rock created as a by-product of iron smelting. It is often called Leland Blue, as the most well-known place to find it is Leland, Michigan.

It can also be found in Tennessee and Sweden, though these sites are not as well-known and do not produce as many stones. Blue slag is most often a robin’s egg blue, but I’ve seen greenish and purplish stones.

Blue slag is popular because of its aesthetic beauty and because it is a very unique and relatively rare type of rock. The type of iron smelting that produced blue slag was phased out in the late 19th century, so little to no blue slag is being created these days.