Rocks and Minerals that Glow Under Black Light

Glow in the dark rocks and minerals is not new in science. Erik Rintamaki, a Michigan-based rock hound, is credited for discovering a group of rocks that glow under Ultra-violet light. Today, over 500 minerals exhibit fluorescence when observed under different wavelengths of black light. Below we list down ten rocks and minerals that glow under black light (ultraviolet light).

10 Glow in The Dark Rocks

According to science direct, fluorite, popularly known as fluorspar, is a class or rock belonging to the halide mineral category. It is the mineral form of calcium fluoride (CaF2) and can occur as massive or vein deposits. Fluorites emit many colors when under UV light but will mostly appear blue, violet, yellow, or green. These colors are most vivid when viewed under long wave ultraviolet light though some specimens can glow without any visible light source.

Gem society describes scapolite as a group of minerals ranging from meionite to marialite. Scapolite is highly sought after by mineralists and jewelry collectors due to its spectacular fluorescence qualities. The rock emits various colors ranging from pink, violet to orange, yellow, and pale green. Scapolite has phosphorescent and fluorescent qualities, meaning some varieties glow without any visible light source while others glow under UV-long, UV short, and X-ray exposure.

Calcite is a natural rock with a high concentration of calcium carbonate and is commonly found throughout the world. Calcite is the primary compound in limestone and marble. Calcite has many applications ranging from ornamental purposes to construction and agricultural applications.

The rock mostly appears whitish Gray, but some specimens glow red, blue, yellow, and pink when viewed under black light. However, not all calcites are fluorescent.

Scheelite is a group of rocks rich in calcium tungstate minerals with a chemical composition of CaWO4. The rock appears as granular or compact masses and is widely distributed in the Americas and northern Europe. It is an essential ore mineral and is highly valued by mineral collectors for its distinct colors that range from white, brown, blue, and yellow. The color combinations will depend on the quantity of molybdenum present within the rock.

Selenite, named after the ancient Greek goddess of the moon, is a sedimentary rock within the gypsum group of minerals. Selenite mostly appears as a translucent and glass-like variant of gypsum; however, some specimens glow blue and occasionally lime green when under UV light. Selenite large deposit of sedimentary rock and dissolves easily in water.

Autunite is a group of rocks that form due to the oxidation of uranium minerals. The phosphate-rich mineral composition gives autunite rocks a yellow to dark green fluoresce when under ultraviolet light. The rock is fragile, and its coloration varies depending on hydration levels. Dehydration causes the rock to appear yellowish and pale green.

Willemite refers to a class of silicate rocks with high concentrations of zinc silicate Zn2SiO4. It is named after the rock is formed from the metamorphism of hemimorphite and smith stone deposits. The mineral’s crystals appear hexagonal with distinct cleavages and are widely distributed across the globe.
When observed under ultraviolet light, the minerals emit a combination of vivid colors ranging from colorless to white, flesh-red, mahogany brown, black, yellow, and pastel green. Faceted willemites are soft and fragile, making the rock unsuitable for jewelry and craft applications.

Sodalite rock belongs to a mineral group that also includes lazurite, nosean, and hauyne. Its crystals appear in massive or granular form and are primarily blue. However, the stone glows differently when viewed under black light. Some specimens emit pale pink to raspberry red glow when under shortwave UV light and bright yellow to orange when under longwave UV light.
Sodalite has many applications. Its mineral composition allows it to soak up electromagnetic residue making it effective in treating radiation damage. It is also helpful in combating emotional trauma due to calming and mood-enhancing abilities.

Aragonite is a naturally occurring crystal with a primary makeup of calcium carbonate, CaCO3. It arises from both biological and physical processes of precipitation from freshwater and marine ecosystems.
Though similar in composition to calcite, aragonite appears as orthorhombic crystals while calcite forms in trigonal-shaped crystals. It fluoresces white, yellow, blue, green, and orange when observed under black light.

Chalcedony is a crystalline variant of silica that comprises fine particles of moganite and quartz. The stone is compact and occurs in many different patterns and colors. It is naturally occurring as a hydrothermal mineral deposit. It glows yellow, green, or white when viewed under black light. The color variations depend on the nature and quantity of impurities in its composition.

How fluorescence in rocks works 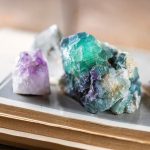 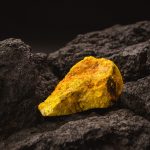