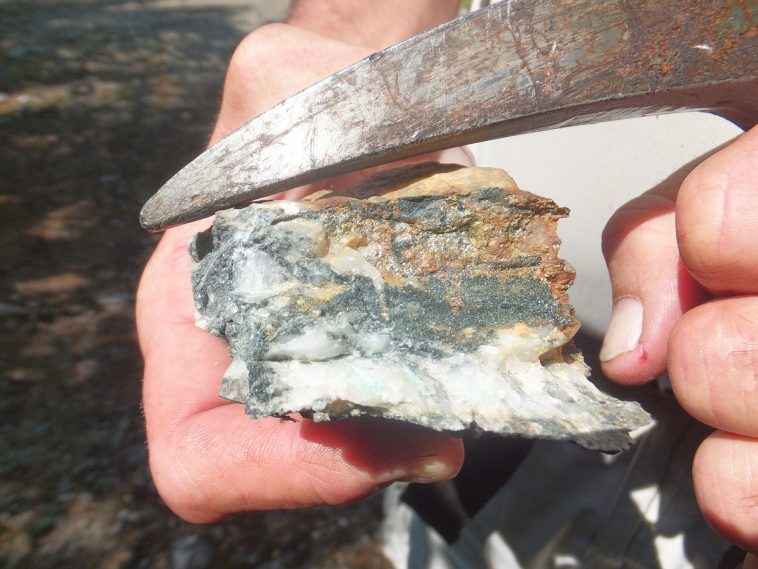 Whether you’re a would-be prospector or just naturally curious, knowing which rocks contain gold can be something of a challenge. The unique properties of the yellow metal have made it prized, and it’s also led to many techniques being used to find it in the various formations that have auriferous potential.

So, let’s take a look at the various gold-bearing rocks out there, and then I’ll give a short summary of why these stones are prone to bearing it!

Related: Can You Keep Gold Found On Public Land?

Quartz is classically aligned with gold. The majority of hard rock deposits found appear to occur in quartz, and gold-in-quartz has even taken on a life of its own. The gold that appears in quartz is almost universally native, meaning that it’s in a metallic form contained in the crystalline quartz. It’s universally considered the richest of the gold ores out there.

The proper term for quartz that contains gold is auriferous quartz. The first word is just used in place of “gold-bearing” because of the need for specific words in the hard sciences like geology. Classically, you’ll often find gold downstream from these formations. The extremely dense gold then settles into the bottom of the waterways that flow through the region, eroding away as time goes on. This secondary deposit is referred to as an alluvial deposit.

Gold found in this way is the easiest to process. You can simply hit it with a hammer and crush the quartz around it until you’ve got only the gold remaining. If you actually find a piece these days, however, I’d recommend holding on to it. Gold-in-quartz actually has a higher value in its original formation than the simple gold weight on most occasions.

Famous deposits include those that precipitated the California Gold Rush, and they’re still being dug in Alaska and Australia. It’s the most easily recognized form of gold, but many deposits have been mined to the extent that there is no longer visible gold in the stone and instead many tons must be processed to receive a small amount.

Granite is a complex stone, which is why it comes in so many colors. It’s loosely defined as a coarse-grained, quartz-rich, intrusive igneous rock. Auriferous granite often contains gold-bearing quartz veins as well, and these veins are generally sought out first by miners due to their higher gold content. The surrounding granite often contains fine grains of gold as well, which must be separated from the stone.

Auriferous granite is generally leached out with cyanide, a dangerous process that involves the use of a lot of nasty chemicals. The granite is first ground into a fine powder, then floated in a dilute cyanide solution with a zinc catalyst. This allows the gold to be filtered out of the solution as it precipitates. The waste from this is incredibly toxic, but the result for the miners is pure gold.

Granite is a very common stone, and not all of it contains gold. Examining granite for gold deposits is still a great method for prospectors. You’ll generally be looking into cracks and crevices for accumulated gold, but there’s another tell-tale sign. Most granite that contains gold also contains an appreciable amount of iron and quartz. Checking for quartz and limonite or hematite can help point you in the right direction.

These deposits are generally used in areas that have already had their auriferous quartz mined out, granite contains far less gold by weight and requires a lot more chemical processing after all. Thus it is associated with the same regions as gold-bearing quartz.

Slate is another stone that can be considered auriferous, depending on the exact formation. In this case, gold ends up deposited in the thin faults and cracks in the slate over time. Slate is actually the metamorphic form of shale. In this case, shale has been under intense pressure and heat for geological amounts of time.

Slate is most well-known for being used as roof tiles. Here the basic nature of slate can be taken advantage of, it separates into layers of almost uniform thickness. It’s also been used in other forms of construction and it’s found in many places around the world. The most important accessory minerals to slate are primarily sulfides, the result of long-dormant hydrothermal vents, and the others are iron oxides.

You may have noticed a trend here: most of the sources of gold that we can exploit are associated with ancient hydrothermal activity and iron oxides of various types. The presence of these in slate can point to the inclusion of gold in the extremely thin cracks in the material. While some slate is auriferous, it’s rather uncommon. The richest sources generally have rusty streaks through them, a tell-tale sign of larger than usual amounts of iron deposition.

The two primary places where slate has been exploited for bearing gold in the USA include the Carolina Slate Belt and, naturally, the Sierra Nevadas of California.

Basalt is an igneous stone that’s rather common. It often includes incredible minerals, whether it’s from the floors of the Great Lakes or in the Ametista do Sul fields of Northern Brazil. Quartz and amethyst are regularly found weathered from this stone, along with other various forms of silica such as agate. It’s less an indication of gold, and more of a stone that may bear it under the right conditions.

Like most gold deposits, the deposits in basalt are hydrothermal in origin. The basalt in question must be in a region that contained hydrothermal activity and must also have been cracked enough to allow the deposit of minerals. This isn’t the case with most basalt.

The tell-tale clue that a region may have auriferous basalt is the presence of Greenstone belts, specifically those that are Archaean in age. That’s just a short jaunt back in time, roughly 2.5 billion years. Greenstone derives its name from the color of the stone. The green color is given by large amounts of copper and chlorite-bearing minerals settling throughout the region, but basalt remains a large component of many. In this fractured rock, it is sometimes possible to find gold.

The Greenstone belts in the US are concentrated in Wyoming but are too young to be auriferous. Instead, the main belts mined are those in Australia and Canada, where they often prove a rich source of gold.

A schist is a stone that has schistosity. This property means that by looking at the stone one can easily see the larger grains of minerals with a small magnifying lens but they’re arranged in a way that they can easily be flaked apart. They’re often comprised of granular minerals like quartz and feldspar interspersed between the “flaky” elements like mica, chlorites, and graphite. It describes an enormous variety of stones, not all of which can contain gold.

Specifically, greenschist can contain gold. This is a metamorphic rock, formed from ancient igneous stones like basalt and gabbro. Not all greenschist contain it, of course. Auriferous greenschist is still a rarity. There is also the schist surrounding quartz deposits to take a look at, but the matter is rather complex.

The gold which occurs in these veins is often of the native type and located along shear zones. These are long zones where a change in height has caused rocks to deform or even break after reaching a certain point. The gold can be found in vugs, or holes in the stone, along these points and are often associated with quartz veins. The gold may not be visible at all in the schist itself. I wouldn’t suggest it as a starting point for the amateur prospector unless there’s a known vein in the schist near you.

Schist with gold has been found in quite a few places across the world, including New Zealand, Finland, and even Virginia.

Fool’s Gold is actually a sulfide mineral, known as iron pyrite. It acquired its name due to its close association with gold, which sometimes caused new prospectors to confuse it with actual gold. After all, you may have ended up finding a piece worn down to a round, irregular ball in alluvial deposits in the same area or found specks throughout a stone like a schist or basalt.

Oddly enough, iron pyrite actually does contain an appreciable quantity of gold in many cases. Native gold deposits and pyrite form under similar conditions, being issued forth in hydraulic activity underground by ancient hydrothermal activity. It was previously thought that pyrite didn’t contain gold at all, after all it’s a crystal!

As time has worn on and people search for alternatives to gold ores, pyrite came under question. Using a technique called atom probe tomography (APT) in order to kind of “peel away” the molecules in the sample, gold was found to be hosted in tiny, hair-like faults in the crystal. In these tiny imperfections hides gold, but an industrial-level extraction technique has yet to be settled on.

Oddly enough, it may turn out that Fool’s Gold is the next big source of gold. While more of a curiosity than anything at this point, it certainly shows that even when we’re studying the largest rocks things are still happening at the smallest scale! 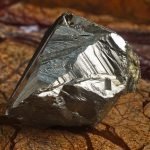 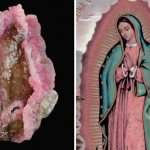