Rocks can have the heft and feel of stone while composed entirely of either quartz or feldspar. In this piece, we will be talking about the different types of rocks that look like glass.

Obsidian glass is a natural glass created when lava has cooled down very quickly. This type of rock is usually black, and it can also appear to have faint swirls in it because of how quickly the cooling took place.

When held up to the light, the obsidian glass will not let much light through at all, and this makes it look almost opaque even though it still looks like a smooth texture (unlike pumice).

Obsidian doesn’t weigh as much as some other types of rocks either, but more often than not, this type of stone feels heavier than regular glass would too.

Amethyst, with a dreamy purple color, is one of the most sought after semi-precious gemstones. There’s just something about it, no matter what form it takes, that draws people in. It’s a great stone for collectors as well, due to natural variations in the stone.

Amethyst is known for “color zoning” within it’s crystals. It’s common to see darker and lighter splotches of purple in the stone, for instance, and sometimes clear quartz is in there as well, all which help give it a glass like appearance.

Gypsum is a unique mineral that can resemble glass at times. This mineral comes in a variety of shapes and sizes.

Because of how some varieties of gypsum can resemble glass, gypsum has become a favorite amongst rock collectors.

Quartz is a common type of rock that can be found all over the world. It looks like glass, and some quartz even has some air bubbles inside of it (called amygdaloidal quartz).

Many people mistake this kind of rock for glass because they look similar to one another, but they feel different. Some types of rocks might look like glass sometimes, especially if you find them lying around on the ground (and not broken).

For example, agate might look like chunks of ice at first glance, but upon closer inspection, these stones will have bands running through them instead of any ice crystals.

This is part of why most rocks don’t resemble glass too often unless they contain quartz or feldspar.

Feldspars are another common type of rock that looks like glass. Some agate is made up of a combination of feldspar and quartz too. Feldspar often has a purple or pink color when you find the stone in its raw form.

When people mistake rocks for glass, they tend to think about small pieces of broken glass because this is usually what comes to mind whenever someone pictures glass in their head.

However, rocks that look like glass will probably be the same size because breaking them would cause them to lose their shape and structure (which makes them resemble real glass).

This means that most rocks can look like glass, but they will not be broken because breaking them would cause the structure to change too much for people to mistake it for glass any longer.

Moonstone is another stone that people mistake for glass because it can look very similar to quartz. Moonstone has a shimmering effect on it, and the color of this rock will usually be white or grey.

Sometimes, you might find a moonstone that looks blue instead of its usual white/grey shade. The difference between moonstone and quartz is that moonstones have a sheen to them which means they look wet all the time (because of the way light reflects off their surface).

This type of rock comes from feldspar too, and it might also contain mica in it. Mica allows other types of rocks to resemble glass even more because mica reflects light, just like water does.

Jasper can be mistaken for glass if somebody doesn’t know what they’re looking at, and it might even feel like the glass we’re all used to touching too. The difference between rocks that look like glass and jasper is that jasper has small quartz, which causes the rock to glitter sometimes when light hits it (at certain angles).

However, this isn’t always the case because jasper can come from other minerals, including agate and other sediments (which also make them resemble glass).

Some other examples of rocks that resemble glass include flint, obsidian, moonstone, chalcedony, heliotrope, and onyx.

Flint is another type of rock that can resemble glass, and sometimes people will confuse this for obsidian. However, flint is usually a pale brown or grey color when taken out of the ground.

If you break flint open, you might find small black flakes inside instead of any crystal formation (which makes it look like broken glass). Flint was once used to make arrowheads because it could be sharpened to a fine point easily with other types of stones.

Battered stone can resemble glass as well if somebody hasn’t seen real glasses before in their life. The main difference between these two rocks is that battered stones are usually found on beaches, while flint often looks more like chalcedony (because it also has a sheen to it) when it’s in its raw state.

Another type of rock that can resemble glass is chalcedony (which sometimes looks like flint too). If you break this type of stone, you might find small crystals inside instead of any sediment because this falls under the quartz category of rocks.

Chalcedony is usually pale grey, but it can also appear in other shades depending on its level of transparency. This type of stone might have a sheen to it when you break it open, which means chalcedony will usually look wet or oily instead of dry.

This means if someone hasn’t seen glass before, they might easily mistake chalcedony for battered stone because they both have this shiny quality. However, if someone doesn’t know what either one looks like, they might think that chalcedony is just a very smooth piece of grey rock with sediment inside instead of crystals.

Emeralds and rubies are some other types of rocks that look like glass. People might mistake these two stones for glass if they don’t know what they’re looking at because the way light reflects off their surface makes them appear very similar to regular glass.

However, there are differences between emeralds and rubies, too, which means you need to know what you’re looking at before assuming it’s just a regular piece of glass instead.

Emeralds can be found in many different shades (ranging from light green to dark green), while rubies only come in red.

Also, this type of stone is often transparent, which will cause more differences if somebody doesn’t know what they’re seeing; transparent stones allow people to see right through them, whereas regular glass is usually not transparent.

Opals are another type of stone that might resemble glass if somebody doesn’t know what they’re looking at. This shiny gemstone is usually pale white, but it can appear in a wide range of colors (including reds, yellows, and greens).

When light hits opal, the rainbow-colored effect of the opal’s play-of-color will create a sheen to its surface, making them look wet or oily instead of dry.

If you break an opal open, it can reveal biscuit-like patches instead of any crystal formation, making them look more like glass than other types of rocks. However, if someone’s never seen a piece of opal before, then it might be difficult to know exactly what they’re looking at.

Glass doesn’t have any color to it, so this can help somebody differentiate between the two if they’ve been told that opals come in different colors as well as transparent stones.

Pearls are another type of gemstone that can resemble glass if you don’t know what they are yet.

This colorless stone might have a pink tint or pale yellow tint, but either way, pearls are usually very shiny because the way light hits their surface causes them to look wet or oily instead of dry. If someone finds this type of gemstone by itself, there’s no problem knowing what they’ve found immediately.

Also, pearls can be broken apart easily if you put too much pressure on them, which means they don’t shatter as glass would. 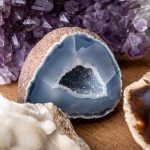 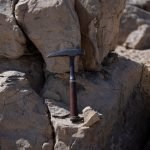