Similar terms with stones get confusing, especially when both are in the same family. These silica-laden stones are commonly available as both specimens and cut stones on the market. But how do you tell them apart? Are there fakes?

Let’s get into the heart of the matter, and I’ll teach you the ins and outs of figuring out snowflake obsidian versus snowflake jasper.

What is Snowflake Obsidian?

Snowflake obsidian is obsidian with white inclusions that resemble snowflakes. It’s one of the more commonly seen variants of obsidian, with deposits being found across much of the world.

Like all variants of obsidian, the stone is actually glass. That’s an important distinction since it means the silica in the mineral lacks a true crystalline structure. Obsidian undergoes another process after being folded back into the earth over time, called devitrification, that turns it into a true stone after a few million years.

The inclusions in snowflake obsidian are actually another form of silica known as cristobalite. It has a unique crystalline structure compared to quartz or the more nebulous cryptocrystalline varieties such as jasper or agate.

Cristobalite forms into spherules in the larger base of silica that creates obsidian. When cut or broken open, they display intricate patterns radiating from the center. They resemble snowflakes, hence the name.

So the important thing to remember is that snowflake obsidian is a volcanic glass that contains spherules of cristobalite.

What is Snowflake Jasper?

Snowflake Jasper is a relatively new term. It’s important to keep in mind that microcrystalline quartz classification is messy in the first place, and gets worse the more marketable the material is.

Snowflake Jasper can refer to a few materials. I most often see it to describe… snowflake obsidian. The majority of material being sold as Snowflake Jasper seems to come out of Chinese lapidary shops and it’s probably just the result of a mistranslation. It’s not like the price gets jacked up when the name changes. It’s affordable no matter what it’s sold as.

The name sometimes comes up with various jaspers that have snowflake-like patterns contained within them. That said, the exact formation that creates snowflake obsidian does not occur in jasper due to the way it forms.

The most common “real” jasper I’ve seen under this label is Mexican Red Snowflake Jasper. At first glance, it just appears to be a less colorful variant of the Poppy Jasper. Poppy Jasper has similar formations to the cristobalite in Snowflake Obsidian, but the “flowers” are usually red in color.

The “Snowflake” variety appears to be red and orange with a dominant black background in most cases, while Poppy Jasper usually has a yellow or orange base with bits of black.

The simple truth is that the majority of “Snowflake Jasper” is just Snowflake Obsidian under a different marketing name. The rest are specific, regional jaspers that happen to have snowflake inclusions.

Well, as you can see above, the two are often the same thing.

They’re both silica-rich stones, containing the same base ingredients of SiO₂. Actual jasper is a bit different, but we’ll get to that in a moment.

For the most part, jasper and obsidian share a lot of the same properties. That includes things like conchoidal fractures, although obsidian fractures with a much cleaner edge than jasper.

Both jasper and obsidian have been used as tool materials in the past.

Conchoidal fractures allow you to produce an edge of the stone that was useful for our ancestors. They result from the

Obsidian, in particular, is extremely sharp with the possibility of a monoatomic edge when carefully knapped. Jasper can’t achieve that sharpness, but still makes a good material for arrowheads and knives.

Conchoidal fractures only occur in stones with fine grains and no cleave planes. Most silica derivatives will produce conchoidal fractures, with fine-grained stones producing a much cleaner fracture than those which have a larger internal crystal structure.

Their similarity lies in chemical composition and their real-world use… in the cases where you’re not just looking at a wrongly labeled piece of Snowflake Obsidian.

The differences in various silica-bearing stones are pretty immense. For instance, obsidian usually sits around a 5-5.5 on the Moh’s scale, while Jasper runs from 6-7 depending on the variety and individual stone.

Color-wise, Snowflake Jasper will always have more tones than simply being black and white. Most frequently, the “snowflakes” will be red or yellow instead of the white that’s associated with Snowflake Obsidian.

The key difference isn’t in what’s in the minerals, but instead in their formation.

Jasper is a form of microcrystalline quartz, with an orderly internal structure despite the rather amorphous appearance. This organization makes it a stone, rather than the glass that forms obsidian.

Obsidian, on the other hand, is a glass. There is no internal structure, instead, it’s just a mass of fused silica and impurities. In Snowflake Obsidian, specifically, the high temperatures also cause the formation of the quartz polymorph cristobalite.

The differences are significant, especially when it comes to coloration, but the biggest one remains the simple fact that obsidian is volcanic glass and not a stone in the sense that it’s normally meant.

How Do I Tell Snowflake Obsidian and Snowflake Jasper Apart?

All samples of jasper I’ve seen that have “snowflake” in their name contain some form of red or orange. They may also contain similar patterns, but obsidian’s distinctive darkness simply isn’t present in them.

Like some other materials, it’s a good sign the dealer doesn’t really know what they’re doing. That’s not great for a new rockhound, who may struggle to identify the basics, but it can work to your advantage on occasion. 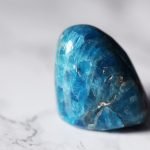 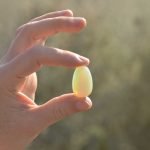