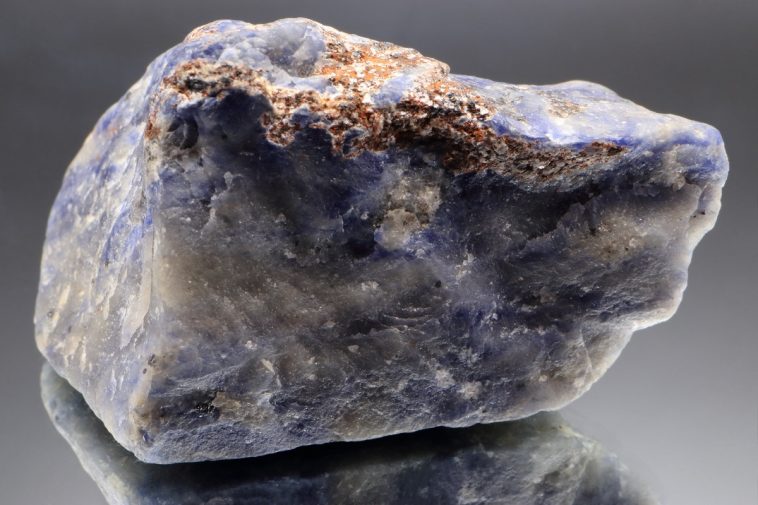 Sodalite is a common find in rock shops, showing off a spectrum of grey-to-blue coloration. This rock has a lot more going on that it seems on the surface, and it’s a great find for any collectors out there.

So, let’s take a closer look at this great little rock with our guide to sodalite!

Sodalite is a tectosilicate mineral, usually royal blue in color. With that said, what we commonly refer to as sodalite is more often a rock that happens to contain the mineral itself. It occurs in large masses, with some of the best quality material found in Ontario.

Oddly, despite its beauty and the large amounts produced, it’s a recent addition to the family of rocks. Since it was discovered in the 1800s it has become a relatively important decorative stone. Since it occurs in large formations it can be used to make things like vases and bowls in addition to smaller carvings.

Sodalite grows in conglomeration with a bunch of other minerals. Among them are hauyne, lazurite, and nosean. You may recognize lazurite as the mineral from which lapis lazuli takes its name. Sodalite is quite similar in that it’s actually named for one mineral while being found as a mixture in nature.

Sodalite is sometimes passed off as lapis lazuli. The color differences are subtle to most people, with sodalite being a deep royal blue and lapis tending towards being ultramarine instead. They’re both often mottled with white veins. In sodalite, these veins are usually calcite.

However, sodalite doesn’t occur alongside pyrite while lapis does. This is the biggest tell for a collector with a possible fake collection.

Sodalite is also the fluorescent component of many of the rocks found on the shores of the Great Lakes.

These fluorescent stones are sometimes called Yooperlite, which is a trademarked name for sales and not actually a geological term. If you want to get specific they’re sodalite-rich syenite.

Sodalite is a royal blue mineral, but the name is most often used to describe conglomerates rich in sodalite. This leaves it with variable quality, much like lapis lazuli, with many different grades available.

No discussion of sodalite is finished before we spend a moment on hackmanite. This rare form of sodalite is a true oddity in the mineral world due to its displaying tenebrescence. This property can also be described as reversible photochromism, and it’s incredibly rare in natural materials.

This quality means that the stone will change colors in light, but it’s also reversible. This is different than the color change effect in stones like alexandrite since the stone doesn’t immediately change color.

Instead, hackmanite will slowly change color in sunlight. The variety found in Greenland is a strong violet when pulled from the earth, fading to a pale green-white after prolonged sun exposure. It then changes back when kept out of the sun for some time.

There is another variety found in Burma that is clear when mined but ends up being purple after sun exposure. This variety is also reversible.

Hackmanite is a strange form of sodalite which changes colors back and forth depending on sun exposure. This quality is found in few other gemstones or even man-made materials. Of the latter, the only commonly known use is in glasses that darken when exposed to light.

Where Can Sodalite Be Found?

Much of the production of sodalite takes place in Afghanistan, but there are also important deposits in Greeland and Brazil. There are smaller deposits scattered across the world.

In the United States, sodalite occurs in California, Montana, Maine, and Arkansas. There is also a large, important deposit of the stone near Ontario if you happen to be dwelling north of the border.

The Davis Quarry is also near Ontario, and it’s one of the few places that produce hackmanite.

While sodalite does occur in the US, I was unable to find a public gathering spot with a more than passing chance of digging it up yourself. You may have to purchase specimens if you’d like them in your collection.

Of course, the other minerals in those locations are usually well worth the trip, and a bit of sodalite is a nice bonus if you happen upon it.

Is There Fake Sodalite?

In my experience, sodalite is far more likely to be used as a fake than for the mineral to be faked. It’s most often seen being passed off as lapis lazuli since mid-to-high grade sodalite is close in color and hardness to lapis.

It’s not a great fake, the discerning eye will immediately know the difference, but it can fool beginners. You should look for the following if you think that your lapis is actually sodalite:

While blue sodalite is rarely faked, there are a number of fake pieces of hackmanite out there. It’s not super common, but you should be wary when prices are low.

Remember that hackmanite is very rare, so large stocks at a low price are usually an indicator something is amiss. Some merchants just term all white sodalite hackmanite and sell you sodalite that’s only UV-reactive instead of displaying the true color-changing properties that typify the stone.

Even then, these fakes aren’t ultra-common.

Treatments are sometimes used on sodalite without being disclosed. It’s honestly not worth the effort in most cases, but people do try.

Low-quality sodalite with a lot of calcite in the mix can be dyed to give it a more uniform color. You can find out by simply touching a piece of suspected dyed material with a rag dipped in acetone. If any blue comes off… well, it’s dyed!

I’ve also seen poor-quality material stabilized for personal use. That means it’s possible, but still unlikely, that sodalite you buy may have been impregnated with epoxy or resin to make a harder, more uniform stone.

As a general rule, you can enjoy sodalite without worrying if it’s fake. It’s just not an expensive enough material for people to bother with counterfeiting. 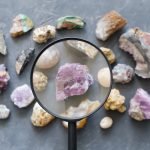 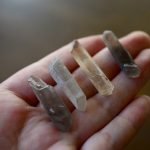