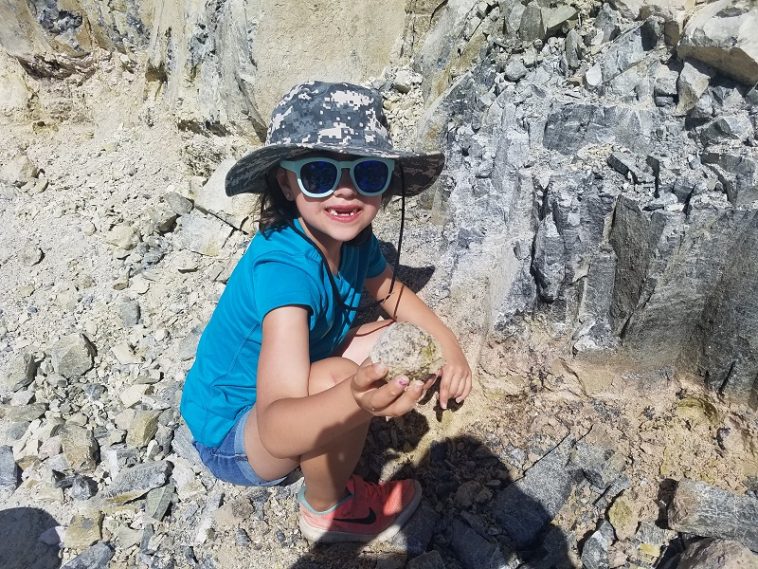 Difference between a Thunderegg and a Geode

If you’ve ever been to a gem and mineral show or a store that sells rocks, you’ve definitely seen geodes or thundereggs. These beautiful polished and cut rocks are usually displayed prominently to catch a viewers eye.

They can be displayed alone, or used as ends or paperweights. They come in all sorts of colors, shapes, and sizes. Usually they have beautiful crystals formed on the inside in intricate patterns or shapes.

Thundereggs and Geodes are two types of rocks prized by rockhounds and mineral collectors for their plain rocky outsides with beautiful crystal or crystalline insides. If both rocks are plain on the outside with beautiful treasures inside, then what are the differences between the two?

Is the difference decided by geologists or rockhounds? It turns out, there IS a specific difference between thundereggs and geodes!

A geologist defines a thunderegg as having formed in a volcanic rhyolite rock layer and is a structural formation. Conversely, a geode can occur in both volcanic and sedimentary rocks. This makes every thunderegg a type of geode by definition, but not every geode is a thunderegg! And even that is up for debate!

Controversy in the Geologic Community

There is controversy and debate on thunderegg classification as a geode, and different geologists will give you different answers.

Some geologists say that a geode must have a void space, otherwise it should be designated as a “nodule,” while others say that they must be spherical or sub spherical.

Not all Voids are Created Equal

Within the geode/thunderegg controversy, method of formation is another big argument. Thunderegg void spaces are most prized when they contain points, which is believed to be due to a fracture pattern. Due to the method of void space creation, some geologists do not classify fractures as vugs and so they deem the thunderegg different from a geode.

Depends Who You Ask

Ultimately, the answer depends on who you ask. Both are secondary structures with secondary mineralization. I have found in my years of touring and shopping at gem and mineral shows that the thundereggs are always included with the geodes because of their similarities.  With the knowledge of what is a geode and what is a thunderegg you can decide if you would put the two together on your shelf.

What is a Geode?

A geode is a rock structure that forms around a void, or open space, that becomes filled with crystals or crystalline deposits over time. These voids are known as”vugs” to geologists. If we remember back to the three types of rocks we know there are igneous rocks, metamorphic rocks, and sedimentary rocks.

Geodes form in voids, like gas bubbles, in igneous rocks, and in void spaces left by erosion in sedimentary rocks. Metamorphic rocks do not often contain void spaces due to the folding, compression, and melting of the rocks.

Now that we have a method for creating a hollow void space, water does the work of transporting mineral rich fluid into these spaces. Over time, the minerals in the ground water are deposited in the space and grow into beautiful crystals of all types.

Crystals can be quartz, calcite, barite, gypsum, or any other multitude or combination of crystals if the required elements are found in the local ground water!

How Geodes Make it to the Surface

Once the harder mineralized inside forms, the softer host rock around it can erode leaving the spherical nodule of crystals that can be cut in half to reveal the crystal growth inside. Sometimes you can even tell which direction was up when the minerals precipitate out by identifying a flat layer that was formerly the sitting waters surface!

What Is a Thunderegg?

A thunderegg is a geologic structure that forms specifically in rhyolite, an igneous type of rock that comes from volcanic activity. Rhyolite is a silica rich volcanic rock that is very commonly associated with big, violent, volcanic explosions! As it gets deposited from volcanic eruptions it creates layers that trap gasses, and when it cools it contracts to create fractures and voids, perfect spaces for forming crystals.

Now that a void is formed, how do crystals get deposited inside? Mineral rich ground water again comes into these structures over time and slowly precipitates out layers of fine cryptocrystalline quartz, also known as chalcedony. But chalcedony isn’t the only thing we find in thundereggs.

Quartz crystals, gypsum crystals, and even zeolites can be found in these voids. Just like a geode, the process for crystal formation is precipitation, but the specific host rock type and location makes the structure a thunderegg.

Why Do They Have Different Names?

Now you might be wondering, “Why is there a difference between calling one a geode and one a thunderegg?” Besides the structural differences, the term thunderegg actually comes from history.

Native Americans in the Pacific Northwest were the first to find and name these beautiful stones “Thundereggs.” They held the belief that the thundereggs were the eggs of thunderbirds, or thunder spirits, and that they were formed by the storms and the thunder and lightning caused between battling thunder spirits who hurled their eggs at each other from mountain top to mountain top!

Related: How To Cut and Polish Thundereggs

Where can I find Geodes and Thundereggs?

Geodes and thundereggs can be found all over the world, but there are many places that are famous for collectors due to the abundance and/or the quality and types of geodes that can be found.

There are many famous localities where these beautiful stones are mined or collected. The following are some of the most famous geode and thunderegg locations around the world.

Brazil is famous for their geode deposits. Large basalt flows in Brazil contain huge vugs that range from an inch or two to being so large you can stand inside them. The basalt vugs are full of beautiful purple amethyst crystals and some even contain secondary crystals like calcite that grow on the amethyst.

These geodes can range from just a few dollars to tens or even hundreds of thousands of dollars. Though the area is famous for the large geodes, the extraction process is very intensive and requires heavy machinery for the hard basalt host rock. These mines are not open to casual collectors, but samples are commonly for sale all over.

American geodes are very common online and at rock shows available to crack open yourself. The Keokuk region geodes are small enough to fit in your hand, or sometimes larger than your head. They originate in mudstones near the intersection of Missouri, Iowa, and Illinois and are found in-situ (in the rock formation) or weathered out and found on the ground or in stream beds.

The geodes are formed in the Warsaw Formation, a roughly ~340 million year old mudstone formation. The Keokuk geodes are predominantly quartz, but are also known to contain sulphites such as pyrite or sphalerite. These geodes can be collected by rockhounds or you can even buy them online and try your hand at cracking them open at home.

Utah, has the Dugway Geode beds which are also rhyolitic in composition.

These geodes look completely different from the Pacific Northwest thundereggs and are not considered the same thing. These geodes commonly have strange shapes and are often light blue and pale pink with agate, chalcedony, and druzy quartz interiors.

Some are even found to fluoresce in ultraviolet light due to trace amounts of uranium. These geodes can be found by collectors in person by anyone who wants to search for them. Maps to the Dugway Geode beds can be obtained from www.Geology.utah.gov.

American thundereggs are famous for being found in the Pacific Northwest near the Cascade Mountain Range. Oregon in particular is famous for having thundereggs and even designated it their official state rock.

Crook, Jefferson, and Wheeler counties are known to have the largest deposits of thundereggs and they can be found in roadside highway cuts, river cuts in the area, or weathered out and found in the soils near the rhyolite flows.

There are several rock shops in the area that can direct you to local hunting spots where thundereggs can be found in the rhyolite deposits. The Ore Bin, vol. 27 from 1965 will provide a more detailed history along with maps and geologic information about specific formations that contain thundereggs.

Other fakes include gluing accessory minerals that do not form in geodes naturally. Some industrious folks have even learned how to grow non natural crystals into fake rocks they make out of plaster.

Please always be aware that not all geodes for sale are 100% natural, and even though the man made ones may be beautiful as well, they may be sold under false pretenses as 100% natural. 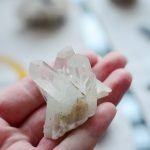 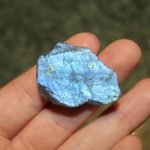