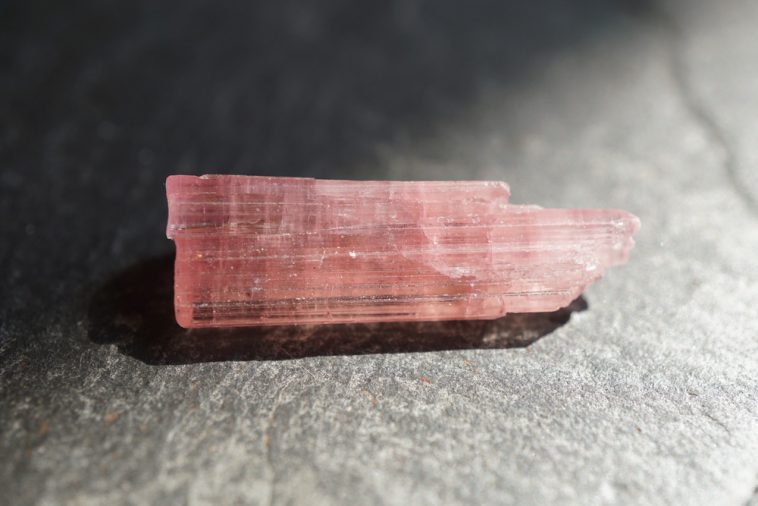 Tourmaline refers to a larger group of boron silicate minerals that share the same physical characteristics and crystal structure that occur in numerous colors and are pyroelectric.

Tourmaline is composed of aluminum, iron, magnesium, sodium, lithium, or potassium elements and occurs as long, slender to thick prismatic-comular crystals that are usually triangular in cross-section.

Dutch traders first discovered Tourmaline off the West Coast of Italy in the 1700s before it was recognized in the entire Europe. Europeans fell in love with the stone, which led to its popularity and demand.

The word tourmaline originated from “turmali” a Sinhalese term that means mixed gems. This name was given on the island of Sri Lanka to colored crystals.

Tourmaline is the birthstone for the month of October, and it is one of the most popular gemstones in the world.

They are used for jewelry making and are a popular collector’s item for rock and mineral enthusiasts as well as rockhounds. A stone with well-formed crystals and attractive colors can fetch thousands of dollars.

Read on to find out more about Tourmaline, some of its forms, and where you can find it.

What are the Different Types of Tourmaline?

Tourmaline occurs in different forms and with different characteristics, but all hold the same properties. It’s not as prevalent as some other gems, and it can be found in many regions of the world, in forms such as:

Schorl or the Black tourmaline is the most popular type of tourmaline you can ever find. This gem comes in a lustrous black crystal due to the existence of Sodium iron.

Scientists grow Schorl in prismatic columns where it gradually develops striated grains. And after attaining the recommended hardness, the gems can be used for various tasks, including in LEDs and X-ray machines.

Beauticians use Schorl tourmaline to straighten the hair in therapies that require intense heat. However, you can also find grains of this metal in bracelets that help combat negative or psychic energies from entering one’s aura.

Schorl ranks at level 7 on the Moh’s scale. This hardness is attributed to its chemical composition that includes iron, magnesium, boro-silicate, and sodium. When observed against the light, it appears opaque and never transparent.

It occurs as an elongated prismatic crystal that is heavily striated, with crystals boosting a rounded, triangular cross-section and a flattened pyramid end. And its crystal size can range from small to extremely large.

Schorl is a favorite stone among the rockhound community who search for it to sell or collect. It’s found in Germany, England, Italy, the USA, Namibia, Brazil, and Afghanistan.

Dravite, also called Brown Tourmaline, is formed when hydrothermal processes carry minerals in vapor form. The vapor then condenses to form translucent, hard crystals that are opaque. However, it’s especially unique for its resinous or vitreous luster.

This mineral was first discovered in the Dravo River in Slovenia, where it coins its name. However, you can also find it in the U.S., Russia, Italy, Slovenia, Australia, and Brazil. In Africa, it can only be found in Tanzania.  Its composition consists of magnesium, silicon, sodium, boron, and oxygen. Generally, it ranks at level 7 on the Mohs scale.

Elbaite is the most known and valuable of all Tourmalines. Almost all of the Tourmaline gemstones and most of the multicolored Tourmalines are Elbait.

Its crystals come in virtually every color of the spectrum and are unsurpassed in beauty. Moreover, it has many interesting optical properties, with some crystals even exhibiting pleochroic properties. An optical phenomenon in which a substance has different colors when viewed at different angles.

It comprises sodium, lithium, aluminum, silicon, boron, hydrogen, and oxygen, and it’s named after the place it was first discovered, Italy’s island of Elba.

An interesting fact about Elbaite is that it’s one of the three pegmatitic minerals in which Johna August Arfwedson determined the new alkali element Lithium in 1818.

It has a hardness level of 7 on the Mohs scale, and as Jerry Rig would put it, it scratches at a level seven with deeper grooves at level eight. And just like the screen on your phone, you probably shouldn’t be dropping it.

Because of the stone’s beauty and vitreous luster, Elbait gems are primarily used in jewels and are a favorite among the rockhound and collector communities due to their high value.

Elbaite stones can be found in Canada, Russia, Afghanistan, Pakistan, the United States, Brazil, and other locations.

Paraiba is arguably one of the rarest Tourmaline gemstones and among the world’s most prized gemstones.

They have a vibrant turquoise to green and neo-blue hue colored by copper and are only found in the Mina da Batalha in the Federal Brazilian State of Paraiba. They are named after this region they come from of Paraiba.

Paraiba has a hardness score of 7 on the Mohs scale and consists of a vitreous luster.

Because of their rarity, sometimes they can be more expensive than diamonds, and only one Parabia is mined for every ten thousand diamonds. And for this reason, this is one germ stone most rockhounds will go without ever laying their eyes on.

And for those who do, it will probably change their lives forever.

It’s used to make expensive jewels and is a bragging rites piece for rockhounds and collectors who have one.

Tourmaline is not always found where it was formed. And due to weathering and erosion, some Tourmaline crystals have traveled far and can be found in places you wouldn’t expect them, like river beds and beaches.

And due to Tourmaline’s hardness and its ability to resist chemical weathering, it can persist in a stream and travel long distances.

The most common method of mining Tourmaline is by digging or blasting vein sources. But collecting it at locations where the elements have been deposited is also a viable option.

Tourmaline is a diverse stone by itself and presents many opportunities for those seeking to find it.

One thing to note about Tourmaline is its naming conventions, and most Tourmalines are identified and differentiated by their mined region.

So, if the same type of Tourmaline is discovered in a different region of the world, the quality of the gems might be different, and you can see how this is an issue to look out for if you are a rockhound, collector, or a Tourmaline customer.

For example, Paraiba Tourmaline is native to Brazil, but samples have also been found in Africa. The African Paraiba also commands a handsome figure, but most buyers prefer the colors of Brazilian Paraiba and are willing to pay a premium to match.

Where Can You Find Tourmaline in North America

Tourmaline can be found in various places all over the world and in North America as well. However, finding high-quality gems is not as easy.

In the United States, Southern California is the most critical source of Tourmaline. Though some have also been discovered and mined in Maine, California has remained the center of Tourmaline mining since the gems’ popularization back in the 1800s.

Back then, at the height of Tourmaline’s popularity, Californian Tourmaline was even exported to China. It was used in Chinese temple carvings that still exist today, bearing testament to the germ’s durability.

For rockhounds looking to bag their gems for their collection, Tourmaline mines found in San Diego County are the places to test their luck, as the mines still yield a lot of the stuff.

However, if visiting the mines, it’s advisable to consult the local authorities about their mining laws or permits before attempting to mine or pick any precious stones. Some of them are in private or protected land and might land you in trouble if found picking them.

Nevertheless, some small mines are open to the public for mining in San Diego County.

Public mines might not be the best places to find tourmaline because they are open to the public and have been mined excessively. These old mines are an excellent place to start learning about mining the gems and the rockhound community.

Some other notable Tourmaline mining locations are the Himalaya Mines in the Mesa Grande District and the Gems of Pala, California, which are all privately operated mines that offer paid guided mining tours and creature comforts such as accommodation.

Most people might be put off from mining and rock hounding due to the hardships associated with mining. Still, places like Mesa Grande and Gems of Pala manage to turn the whole experience into a fun activity that you can enjoy.

Most of the gems you will find in California are of the red and pink variety, mainly used to make jewelry. And for the hopeless romantics, you can find a quality stone and have it made into a bespoke piece for your significant other. I am sure it would hold a lot of sentimental value.

Canada also boasts of producing high-quality tourmalines and has some of its mining locations open to the public and rockhounds in Southern Ontario, Quebec, and remote regions of Nunavut.

Though Bancroft, Ontario is considered Canada’s gem Capital and attracts a lot of rockhounds looking to make their living and people are just trying to land a quality stone for their collection.

Canada also offers various free-reign areas and guided mining tours around some of the most popular mining sites for rockhounds looking to test their luck in the Canadian wilderness.

And for those who have their own Tourmaline stones but find it difficult to identify them, The Gemological Institute of America laboratory is a reputable place you can turn to identify your Tourmaline gem.

Tourmaline is a magnificent gem with colors, crystal structures, and pyroelectric abilities to match. And other than being beautiful, it has created a history of being a gem where lithium was first derived.

It’s a gem that holds a lot of sentimental value to all who receive it as a gift or associate it as the birthstone for October. It’s also a rock that holds a lot of monetary value for rockhounds, collectors, and mining companies who seek to mine and explore it in this manner.

It has led to the creation of communities of like-minded people who engage around its exploitation, with whole industries and ecosystems being created and sustained by these communities. Thus, making Tourmaline an essential lifeline to these industries.

Because Tourmaline is found in different regions, it offers many opportunities for collaboration and fostering relationships for people who could otherwise haven’t crossed paths. Moreover, with the world becoming more connected and a single market, the Tourmaline plays its role as a globalization catalyst.

And in the words of a rockhound, it’s the thrill of the hunt. You never know what you are going to find. So that the next shovel full could be something cool—a Tourmaline crystal. 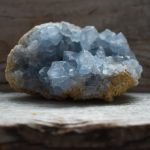 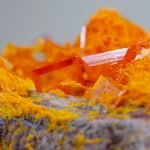