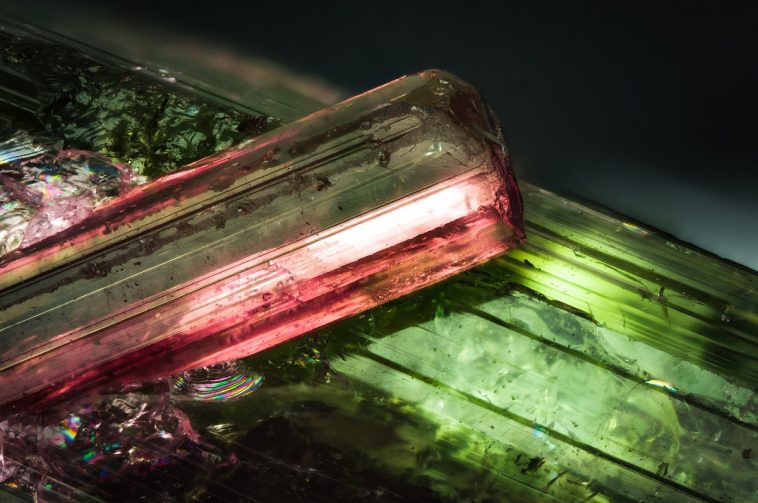 Tourmaline is the birthstone for the month of October, and it is one of the most popular gemstones in the world.

They are used for jewelry making and are a popular collector’s item for rock and mineral enthusiasts as well as rockhounds. A stone with well-formed crystals and attractive colors can fetch thousands of dollars.

Read on to find out more about Tourmaline, some of its forms, and where you can find it.

Related: Ultimate Guide To Tourmaline (What It Is and Where To Find It!)

Tourmaline occurs in different forms and with different characteristics, but all hold the same properties. It’s not as prevalent as some other gems, and it can be found in many regions of the world.

Tourmalines are available in a wide range of vibrant colors. Tourmaline, in fact, has one of the most diverse color ranges of any gem species, occurring in varying hues of practically every color.

According to Gemological Institute of America, many tourmaline color variations even have their own brand names:

Schorl or the Black tourmaline is the most popular type of tourmaline you can ever find. This gem comes in a lustrous black crystal due to the existence of Sodium iron.

Scientists grow Schorl in prismatic columns where it gradually develops striated grains. And after attaining the recommended hardness, the gems can be used for various tasks, including in LEDs and X-ray machines.

Beauticians use Schorl tourmaline to straighten the hair in therapies that require intense heat. However, you can also find grains of this metal in bracelets that help combat negative or psychic energies from entering one’s aura.

Schorl ranks at level 7 on the Moh’s scale. This hardness is attributed to its chemical composition that includes iron, magnesium, boro-silicate, and sodium. When observed against the light, it appears opaque and never transparent.

It occurs as an elongated prismatic crystal that is heavily striated, with crystals boosting a rounded, triangular cross-section and a flattened pyramid end. And its crystal size can range from small to extremely large.

Schorl is a favorite stone among the rockhound community who search for it to sell or collect. It’s found in Germany, England, Italy, the USA, Namibia, Brazil, and Afghanistan.

Dravite, also called Brown Tourmaline, is formed when hydrothermal processes carry minerals in vapor form. The vapor then condenses to form translucent, hard crystals that are opaque. However, it’s especially unique for its resinous or vitreous luster.

This mineral was first discovered in the Dravo River in Slovenia, where it coins its name. However, you can also find it in the U.S., Russia, Italy, Slovenia, Australia, and Brazil. In Africa, it can only be found in Tanzania.  Its composition consists of magnesium, silicon, sodium, boron, and oxygen. Generally, it ranks at level 7 on the Mohs scale.

Uvite is a rare kind of Tourmaline that has unusual crystal structures than the majority of Tourmalines. Though it lacks the color variety of other Tourmaline forms, it does exist in exquisite green and reddish-brown crystals, as well as shiny submetallic crystals. The name Uvite comes from the type locality of Sri Lanka’s Uva Province, where it was first discovered.

Uvite and Dravite Tourmaline are quite similar, and they can sometimes be found combined in a single crystal. It can be difficult to tell the difference between Dravite, Uvite, and the recently recognized Fluor-uvite.

Elbaite is the most known and valuable of all Tourmalines. Almost all of the Tourmaline gemstones and most of the multicolored Tourmalines are Elbait.

Its crystals come in virtually every color of the spectrum and are unsurpassed in beauty. Moreover, it has many interesting optical properties, with some crystals even exhibiting pleochroic properties. An optical phenomenon in which a substance has different colors when viewed at different angles.

It comprises sodium, lithium, aluminum, silicon, boron, hydrogen, and oxygen, and it’s named after the place it was first discovered, Italy’s island of Elba.

An interesting fact about Elbaite is that it’s one of the three pegmatitic minerals in which Johna August Arfwedson determined the new alkali element Lithium in 1818.

It has a hardness level of 7 on the Mohs scale, and as Jerry Rig would put it, it scratches at a level seven with deeper grooves at level eight. And just like the screen on your phone, you probably shouldn’t be dropping it.

Because of the stone’s beauty and vitreous luster, Elbait gems are primarily used in jewels and are a favorite among the rockhound and collector communities due to their high value.

Elbaite stones can be found in Canada, Russia, Afghanistan, Pakistan, the United States, Brazil, and other locations.

Paraiba is arguably one of the rarest Tourmaline gemstones and among the world’s most prized gemstones.

They have a vibrant turquoise to green and neo-blue hue colored by copper and are only found in the Mina da Batalha in the Federal Brazilian State of Paraiba. They are named after this region they come from of Paraiba.

Paraiba has a hardness score of 7 on the Mohs scale and consists of a vitreous luster.

Because of their rarity, sometimes they can be more expensive than diamonds, and only one Parabia is mined for every ten thousand diamonds. And for this reason, this is one germ stone most rockhounds will go without ever laying their eyes on.

And for those who do, it will probably change their lives forever.

It’s used to make expensive jewels and is a bragging rites piece for rockhounds and collectors who have one.

Tourmaline is not always found where it was formed. And due to weathering and erosion, some Tourmaline crystals have traveled far and can be found in places you wouldn’t expect them, like river beds and beaches.

And due to Tourmaline’s hardness and its ability to resist chemical weathering, it can persist in a stream and travel long distances.

The most common method of mining Tourmaline is by digging or blasting vein sources. But collecting it at locations where the elements have been deposited is also a viable option.

Tourmaline is a diverse stone by itself and presents many opportunities for those seeking to find it.

One thing to note about Tourmaline is its naming conventions, and most Tourmalines are identified and differentiated by their mined region.

So, if the same type of Tourmaline is discovered in a different region of the world, the quality of the gems might be different, and you can see how this is an issue to look out for if you are a rockhound, collector, or a Tourmaline customer.

For example, Paraiba Tourmaline is native to Brazil, but samples have also been found in Africa. The African Paraiba also commands a handsome figure, but most buyers prefer the colors of Brazilian Paraiba and are willing to pay a premium to match.

Calcium, lithium, and aluminum are abundant in liddicoatite. It likewise comes from granite-containing pegmatites and has a wide range of colors, often in complicated internal zoned patterns. It is named for the late Richard T. Liddicoat, GIA’s previous president and chairman of its Board of Governors. He is known as the “Father of Modern Gemology.” 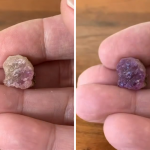 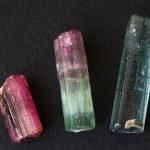