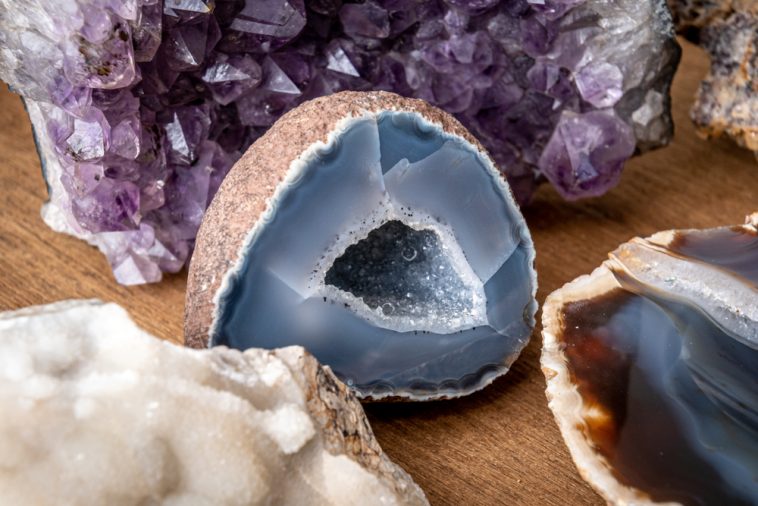 I don’t know about anyone else, but my first geode was the thing that turned young me into a rockhound. There was something incredible about the idea that there were just ordinary rocks filled with crystalline treasures, and there’s nothing quite like cracking your first one open.

But there are so many questions to be answered! Well, that’s what we’re here for! Read on and we’ll discuss where geodes come from, what they’re made of, and how they’re formed!

A geode is a hollow nodule of stone with an interior cavity filled with minerals. These minerals are crystalline and no two localities produce quite the same stones.

This is opposed to nodules, which are irregularly shaped pieces of stone that don’t have much “crust.” They’re also not thundereggs, which are spherical nodules that are completely filled with some form of silica-rich stone like agate.

Geodes vary widely in size and contents, but they’re fairly common in areas that have had extensive volcanic activity in the past. They’re numerous enough that you can collect them in many areas across the country, it’s just a matter of what you’re looking for and what areas you have access to.

The important thing to remember is that a geode is a roughly spherical rock formation that has a hollow interior lined with crystallized minerals.

What is a Geode Made Of?

Geodes have a lot of variance in their makeup.

Perhaps the most famous examples of geodes are the cathedral amethyst from Brazil. These geodes can be taller and wider than a person, even when cut in half, showing off purple amethyst crystals.

And quartz is a common find in geodes across the planet.

But there are a number of different minerals that can make up the primary portion of a geode’s internal cavity. The following are all found making up the internal lining of geodes in various places:

In many cases, the geode will have more than one mineral in it. Geodes tend to form in a relatively ordered structure, with a chalcedony “crust” in most cases. Inside the crust will be the main crystals, usually quartz or calcite. The center is where the rarer formations usually show up, often as small or single crystals.

Not all geodes are the same. Some calcite geodes, for instance, won’t have a silica-rich crust and will instead just be growing on the interior of the host rock.

For instance, a quartz geode may have small pyrite crystals in the inner crystal formation. On occasion rarer minerals can even be found, having precipitated out of the mixture during formation.

This variation in form and composition is part of what makes geodes so collectible. While each locality is different, some have higher rates of inclusions. Keokuk Geodes, for instance, are known to have numerous varieties ranging from plain white calcite or quartz to complicated interior blends with competing crystal habitats.

Geodes are a complex mixture, but in most cases, you can be assured the primary mineral is either quartz or calcite, with anything else being a bonus!

How Do Geodes Form?

There are two ways that geodes form.

Volcanic geodes are what most people are familiar with, and are often the only type of geode formation discussed. These geodes are formed in hollow gas pockets left behind in the stone that inevitably follows an eruption.

Once the exterior of the stone hardens, groundwater seeps in over a long period of time. This is an amazingly slow process, taking millions of years, but as time goes on the crystals continue to form from the groundwater making their way into the cavity.

Other geodes are formed in the pockets of sedimentary rock, mainly those which are comprised o calcite. These geodes form in a similar fashion, but the composition of the surrounding rock may not form an exceptionally hard crust. These geodes can be found in weathered rock, looking just like vugs with exposed crystals.

In either case, it’s just a hollow spot in the rock and a few million years of groundwater penetration. It’s amazing how something so simple becomes such a beautiful wonder with just time and simple elements found all over the planet.

In either case, those with hardened exteriors will eventually weather out of the rock they were formed in, making them easy to collect.

Geode formation is a simple process formed in small gas pockets in igneous or sedimentary stone. The exact makeup of the geode depends entirely on the dissolved minerals that flood the pocket over time.

Where Do Geodes Come From?

Geodes can be found across the world, but they’re more common in certain spots.

Within the United States, for instance, the following states host a sizable amount of geodes:

And that’s mostly just a start. There’s at least one spot in most states, and if not there’s probably something within driving distance.

Digs range from public land far out in the desert, like the Hauser Geode Beds with their varied formations, to paid digs on private land. In some places, you may be able to find the occasional geode in riverbeds as well.

Geode mining is just as varied as the stones themselves.

Some of the best locations just require digging in relatively soft sand. In other areas, you may actually be able to chisel them out of the hard rock they’re encased in. Each spot is a different experience, just like opening each geode is an experience of its own.

There are also well-known examples from famous locales. The amethyst geodes found in Brazil are probably the best-known example but it’s far from the only place in the world they’re found. In most other countries the majority of these spots are privately mined, however, so you won’t be able to get down and dig yourself.

But if you’re in North America and looking… well, you’re in luck! Check out the information right here on our site and see if we can’t help you find your next dig. 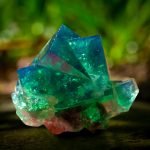 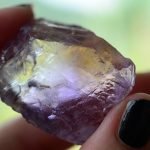