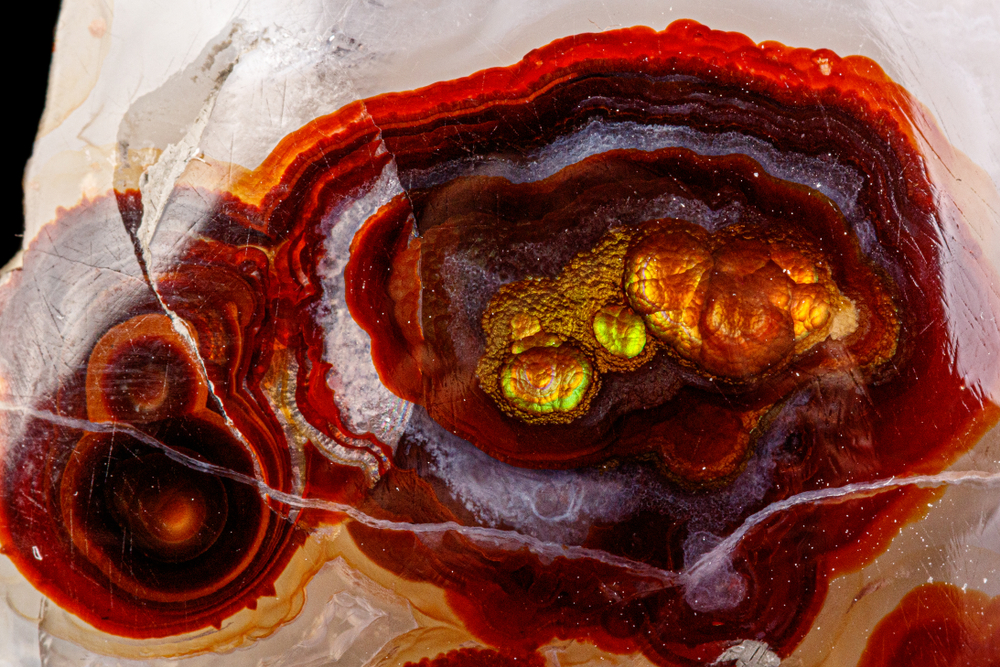 Fire agate is considered by some to be the rarest and newest multicolored gemstone in the world. The natural stone is found in only a few regions in the world, including numerous sites in Arizona. These locations follow a geographic territory known as the Transition Zone, where the Colorado Plateau and the Basin and Range Province meet.

Unique, repeated periods of vocanic activity and faulting combined with the effects of hot water have created a rock collector’s paradise in this zone. Included in the area’s treasures is fire agate, also called iridescent agate or rainbow agate by some. Fire agate is now being called Arizona’s “unofficial” state mineral. It is one of several semi-precious gems found in abundance here.

There are a number of popular sites in the state where fire agate is fairly easily accessed. The Bureau of Land Management (BLM) has two designated collection sites that are open to the public year-round. There are also a number of privately-owned mines that allow limited public participation for a fee.

The Black Hills Rockhound Area is one of the BLM designated sites for collecting minerals and gems, including fire agate. The area is located about 20 miles northeast of Safford. There is a sign near milepost 141 on Highway 191 marking the graded dirt road to the site. The road is generally passable for most cars, and the site is about 2 miles off the highway.

You will need a pick and shovel to find the best specimens. Most are found within 2 feet of the surface. Dedicated rockhounds are usually pleased with their finds here. The area is rough, with no major facilities. Primitive camping is permitted by the BLM for up to 2 weeks.

Arizona’s climate is predominately arid, so bring plenty of water and dress accordingly. Rockhunters will find roughing it is worth the effort for claiming the rare and unique fire agate.

This is the second BLM designated collection site. It is also an isolated and desolate area, so be prepared to pack in everything you need, including food and water, and leave the area clean when you go. The BLM has maps to help you get there. You may also be able to get a map from a rock shop in Duncan, located about 50 miles north, if you’re coming from that direction.

A four-wheel drive vehicle that can handle rough roads is recommended. The area is open year-round. Expect extreme heat in summer and windy, frigid conditions in winter. Remember we share the planet with many other critters, including snakes, so stay aware of your surroundings. Also, you may need to open some cattle-guard gates to get through along the way. Make sure you close them behind you.

There are many specimens to be found in the area, so feel free to wander about and collect. The BLM allows up to 25 pounds of specimens to be collected per day, 250 pounds per year. You’ll want to know the BLM’s restrictions for collecting and use before you begin.

Just as an FYI, always make sure someone knows where you are going and how long you intend to be gone beforehand when visiting isolated areas. Phone service is often unreliable in these areas. Traveling with friends is a good idea, too.

The high quality of fire agate found in the Deer Creek area has led to several active mining ventures. One of those mines, the Penney Mine is sometimes open to the public. Others may allow visits by appointment. Always be respectful of privately-owned property and mines. Don’t hunt rocks without permission on these properties.

Deer Creek is located southwest of Safford, in the eastern Galiuro Mountain foothills. The entire area is not privately owned, but I was unable to find a specific map. Further research through the BLM resource would be helpful. Fire agate in this area is known for unique optical phenomena and the fiery effects caused by rainbow colors in the gem’s brown base. Many gem-quality stones have been unearthed at the site.

The Oatman area is located between the towns of Oatman and Yucca. There are several mines here, but probably the most notable fire agate source in this region is the Cuesta Fire Agate Mine.

This mine offers the public access for a fee, mainly during cooler months of the year. At the present time only a few diggers are allowed per day in order to maintain social distancing. You’ll need to contact the site for specific information about when to visit.

If you prefer not to pay for your specimens, there are open areas in the Oatman field where quality fire agate may be found, but it will, again, take some research to find which land is not privately owned. The fire agate in this area often requires hammer and shovel to collect, and the terrain is rugged.

The Saddle Mountain area has quite a bit of free range in which to search for fire agates. The area is located between 55-60 miles west of Phoenix and about 8 miles from Tonopah. There are many specimens to be found lying on the ground that can be lovely with a bit of cutting and polishing. There are also some larger deposits for those who have the tools and patience to remove them without damage.

There are some trails in the areas that lead up Saddle Mountain if you want to climb higher. Many collectors have found enough pieces to satisfy them on the lower slopes. Natural erosion such as wind and rain continue to help uncover new raw materials throughout the year.

More on Finding Fire Agate in The Arizona Desert 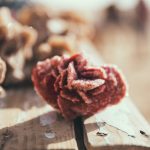 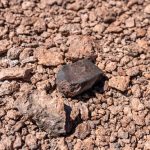