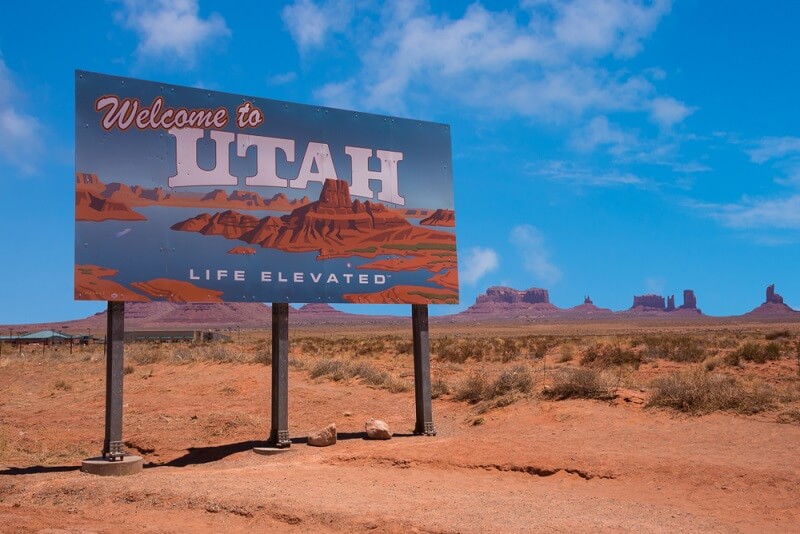 Where To Find Geodes In Utah: Plus Fossils, Minerals and More

Utah is a state practically made of rock. The vast lands of southern Utah are intricately carved into the red and white sandstone limestone layers of the Colorado Plateau, leaving behind well-known monuments in locations like Canyonlands and Zion National Parks. However, there is plenty of other rocks and minerals aside from the red sandstone of southern Utah. This state is even known by some as the Rockhounding Capital of the United States.

And hidden throughout the state, just waiting to be found are geodes. And in this guide I'll give you the best places in Utah to find geodes and any other rocks and minerals that can be found in the area.

The dugway is a large excavation site west of Salt Lake City. It was created from volcanic activity nearly 2 million years ago, and it’s extremely rich in geodes.

At the dugway, you’ll have to dig through some fairly soft sediment to find geodes filled with quartz, amethyst, smokey quartz, and rose quartz. You won’t find many other crystals in the area, but the specimens commonly retrieved from the area tend to be large and of high quality.

The area is free to the public, but there are a few safety concerns that you have to worry about. First, the sediment is very loose and soft. That means that it can cave in if you’re not careful. The area is also pretty hot. So, you’ll want to bring along plenty of water, and you’ll want to keep track of where you’re at in case you need to leave in a hurry. Watch your step and drink plenty of water. If you do that, you’re bound to have a fruitful day of rockhounding.

To get to the dugway geode beds, you’ll want to take I-80 westbound from Salt Lake City. You’ll have to drive 40.5 miles to reach Pony Express Road, and then you’ll have to travel another fifty miles until you see the dugway signs. From there, you can just look for other dig sites.

The area is quite popular among rock enthusiasts, so might have to drive a little further to find some good spots. I recommend taking the turn off road another two miles to find the highest concentration of geodes. Make sure you bring plenty of gas and supplies along with you. You won’t find any gas stations or stores along this route. All in all, It’s a bit of a long drive, but it’s worth it if you want to add some of the most impressive quartz geodes to your collection.

In Juab County, not far from the Dugway geode beds, is Topaz Mountain. As you can probably guess from the name, you can find a ton of topaz in the area. The hues range from nearly clear to almost brown, and there are plenty of specimens that exhibit the classic amber color that everyone knows and loves. The best part is that you don’t even have to do a lot of digging. Most of the area has plenty of topaz laying around on the surface.

While you’re there, keep your eyes open for the spherical quartz geodes that many collectors target. They’re not as common on the mountain as they are down in the dugway, but they are there, and most people are only looking for easy-to-find topaz. So, you might find some very impressive specimens.

There’s one catch to rockhounding at topaz mountain, though. A lot of it is being developed, and the companies working in the area will not allow you to hunt for rocks on their land. You’ll have to find a plot of public land to do your rockhounding. In addition, you’ll have to get a permit to look for anything up there. Luckily, the stones you’ll find are usually gem-quality, and they’re great for collectors, jewelry makers, and artisans.

Getting to Topaz Mountain isn’t difficult. Once you’re in Juab County, there are plenty of signs to direct you, and your phone’s GPS can take you to the best public digging spots.

Geodes aren’t present in Black Rock Desert, but you will find tons of obsidian. The obsidian comes in three different varieties, and one of those is relatively valuable. Regular old black obsidian can be found all over the ground, and you usually don’t even have to dig or break it apart. So, it’s an easy rock to collect. You can also find reddish obsidian that’ll look great in your collection. However, the snowflake obsidian in the area actually has value if you can find a collector to sell it to. It’s glossy black, and it has white crystal veins running through it. If you find any snowflake obsidian, it’s recommended that you collect it or sell it.

The other obsidian specimens aren’t particularly valuable, but they look cool in a collection, and they can be used by artisans for flint knapping primitive tools and art pieces.

The area is free for you to access. You can simply park your car and walk around. Within a short amount of time you should have at least a small bag of obsidian collected. If you want large chunks, you might have to bust out some basic rockhounding tools.

Black Rock Desert is located in Millard County, and there are plenty of signs to help you find it.

Manti-La Sal National Forest is a marble collector’s dream location. You can find small samples of it just laying along the side of the road, and there’s one spot in particular that will allow you to bring home massive chunks of it.

The entire park has marble deposits. So, don’t worry about going to a specific location to find smaller bits of marble. If you make a couple stops along the roadside, you should be able to pick up enough hand-sized chunks of marble to fill a large duffle bag in a matter of a half-hour.

Now, if you want to find huge chunks to use for art projects, or to really draw attention to your collection, you’ll want to head to the quarry. You can enter the quarry freely, and you can take whatever you want. However, you’ll want to bring along some heavy-duty tools to break chunks of marble off the massive slabs. They’re simply too large for you to carry back to your car.

The quarry’s marble is pretty unique, too. Ancient snails were trapped in the area, and the marble formed around them. So, you will frequently find chunks of marble that have the castings of snail shells embedded in them. That makes them extremely good for a rock collection, and they add a prehistoric flare to an art project.

U Dig Fossils is a large trilobite quarry where you and your family can spend the day digging for ancient fossils. The area has a high concentration of trilobites and other marine fossils. So, it is very unlikely that you’ll leave empty handed. In fact, some visitors have actually made money off the site. One visitor found an abnormally large trilobite fossil, and it sold for more than $2000 dollars!

However, U Dig Fossils is not a free dig site. You’ll have to pay roughly $30 dollars to go (depending on which package you buy), and each package provides a slightly different experience. However, the entry fee almost guarantees that you’ll find a good amount of fossils to add to your collection, and it allows you to use the company’s buckets and tools if you don’t have your own. It’s a great way for beginners to start their collections without having to buy rockhounding tools or like rock hammers and supplies. The guides are also very helpful, and they know the area well.

The quarry is about 52 miles away from Delta, Utah, and there are plenty of signs to help you find it. You don’t have to reserve a spot, but you do have to respect their hours of operation. To set up a dig or to get more information, click this link.

1. Ultimate Guide To Geodes (And How To Find Them)

2. Here's How To Determine What Geodes Are Worth

3. How Geodes Are Formed

4. How To Clean Geodes and Thundereggs (Without Damaging Them)